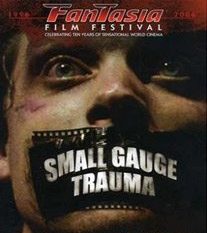 FILM– The Fantasia Film Festival is pretty much an essential pilgrimage for genre fans. So, if you’re either unable to go, or just want to bring a little piece home, Synapse has given us this great collection of shorts.

Abuelitos (Grandfathers)– Set in a bizarre hospital-nursing home combo, elderly men are bathed and cared for by a few old women. It seems that they have a special diet, and whatever is, there’s not much left. When a mysterious man shows up with a little girl, the residents seem thrilled- when they see the caretakers leading her to the kitchen…

Grandfathers is quite a bit like Night of Death! in plot, but the style is much darker. Everything is lit by fluorescent bulbs, so it puts out this artificial feel. Nothing looks natural, not even the people (who are pale, sickly, and have bloodshot eyes). The whole film is just soaked in dread and guilt, and it’s lighting and cinematography enhance tremendously.

Amor Só de Mãe (Love from Mother Only)– Filho lives a miserable life. He’s in the middle of a Brazilian paradise, but his elderly mother dominates his existence. His escape from reality is Formosa, a local whore. After some sex in the jungle, she tells Filho she’s leaving the island, and he can either come with, or stay and rot. When he goes to her bungalow to talk, she reveals herself as a witch, and demands that he kill his mother to be worthy of her- and no one says no to the devil.

Directed by Dennison Ramalho, who went on to write the third Coffin Joe film, this short is a cultural nightmare. Brazil has one of the darkest superstitions about witchcraft that I can think of, and there’s tons of creepy images like demonic alters and bleeding crucifixes. This is a fantastic tropical horror horror show, and the gruesome visuals mix great with the haunting voices.

Chambre Jaune (Yellow Room)– A mix of still images and ridged stop motion, the film shows the colorful events of an intimate encounter at an apartment complex that ends in murder. As the killer waits for the cops to arrive, his flashbacks show what really happened.

I love the couple who directed this short. Their other still frame films are available on the Cinema Abattoir disks (Catharsis and La Fin de Notre Amour), and I’ve been a fan ever since. This outing is less surreal and more of an homage to giallos, but the style is still there and the imagery is fantastic.

Flat-N-Fluffy– An acid head and a communist who has a penchant for guns have ambitions to start a jam band together. What halts this is the unexpected shooting death of their neighbor’s dog, Fluffy. Deciding to cover their crime as a simple hit and run, they drag the carcass into the street and repeatedly run it over. When the old neighbor sees this, she decided to get revenge by confronting the duo in her husband’s tank.

Gritty looking 70’s style animation and a dark sense of humor make this a damn funny short. It kinda feels like someone just put the Bevis and Butt-Head storyboards into a flipbook and filmed the results, so if you don’t like social commentary presented in a stupid fashion, you’ll hate this. It takes a while to get going, but once it starts, it pulls you in quick.

Gorgonas (Gorgons)– In the near future, a trio of pop superstars cause the entire world to petrify into stone, just like the ancient Gorgons. As a squad of soldiers close in on their compound, two lone rejects also try to end the singer’s stone nightmare.

Easily one of the stupidest sounding plots of all time, this short is fucking brilliant. The animation is great, and the way the plot unravels doesn’t give any humor or laughter- just a dark sense of hopelessness. There’s something about this film that’s just damn depressing and haunting at the same time. Also, it uses the theme from my favorite movie of all time, Battle Royale, so that’s a huge plus.

I’ll See You in My Dreams– Set during feudal times, a zombie plague has erupted across Portugal. The infamous zombie killer Lucio has taken residence in a small town, and when he’s not blasting zombies, he’s tending to his undead wife. One night, Lucio brings the village hooker home, and realizes his wife has escaped. This leads to a zombie nightmare that even the famous hunter might not be able to escape.

Drawing references from films like Army of Darkness and Fulci’s Zombie (aside from the name pun), this is a damn good film. It’s decently long, enough gore and sex to please the typical horror fans, and an interesting rendition of the classic song (same as the title of the film). Only problem I had came from the fact that I’m not a fan of fast zombies at all (so that was a damper), but this is still a solid movie.

Infini (Infinity)– As a woman struggles between life and death in the ER, the doctors try to pull her back from her overdose. In an alternate reality, a frail film editor splices and edits mysterious prints that will determine her fate. As his equipment begins to malfunction, the celluloid takes control of its own fate.

Infinity uses the concept of death personified by a film editor. An interesting idea with a satisfying execution,but I really think it leaves too much unanswered. We see the editor working on several films, but only one has any significance. Of course this is the film that causes the chaos, but I am curious to know what happened in the other films. Was it people who’s fate he decided, or just the prelude to the woman overdosing? I did like the movie, but with a plot this damn creative I want much, much more.

L’ilya– Ilya is a film maker infatuated by suicide. People who plan to kill themselves contact her, and she films their actions and comments. While she doesn’t use the audio, she turns the video into a loop to be projected at art parties (because when I want a martini, I want footage of Budd Dwyer projected behind the bar). After another successful day of filming, she returns home to find her life has collapsed. Now, she is finally able to understand the many reasons that drive someone to take their own life.

The longest film on the disk, L’ilya is a dark and almost heartless look at how people see suicide. It plays out like a psychological drama, and we see a character who lacks empathy turn into a shell of a human in less than 40 minutes. It’s fascinating, but the time might bore some viewers seeing as how most shorts are around the 15 minute mark. I can see a few of the more visceral films overpowering it, but I found this to be one of the most disturbing shorts on the disk .

Ruta Destroy!– A musical taking place in a Spanish slum. A group of pill poppers sing about everything from love to stealing money from your parents to buy coke. They’re also trying to score some ecstasy from a hardcore bitch who keeps ditching them. Buy the end of the night, everyone has their fill of music, drugs, and violence.

I was pretty interested until the first musical number came out of fucking no where. It his me as just plain dumb and absurd in an unfunny way (like Napoleon Dynamite). I honestly thought I was going to have to skip this one, but when I gave it some time, the humor started to work and I genuinely enjoyed it. It’s not as entertaining as most of the other shorts, but it get progressively better.

The Separation– A Quay-influenced short about two conjoined twins who live miserable and sullen lives after their separation. One day while making dolls, the twins get the idea to stitch themselves together again; however, an accident during their attempt makes their already gloomy lives unbearable.

For me this is the epitomize of transgressive animation. That surreal, gloomy, unnerving style of stop motion that looks like it belongs in a Tool music video. I loved this short, because it embraces every aspect of a deep, disturbing stop motion film. This is the kind of imagery that causes nightmares.

Sister Lulu– As a nun lies buried in a coffin, she explains what is happening and how she has gotten this far. After endless abuse and torture at the hands of the Sisters, she attempts suicide. She awakens to find that not only did her plan fail, but a even better one has arose. With the help of the kind Sister Lulu, she makes a plan to escape the convent once and for all. Of course this does not work out too well.

Despite the wonderful camerawork and execution, this film is taken down by it’s unoriginal story. I can’t say too much on it, but I don’t see the ending being a shocker to anyone. I personally have seen three different versions of the same plot, so pretty much two minutes in and I knew what was going to happen. I’m not saying it’s a bad movie, just very unoriginal.

Tea Break– In a dark factory, a lone production line worker is counting down the minutes until his break. His job is to decapitate hogtied people as they pass by his station on a convener belt. When he is finally able to take a break, he begins to feel sympathy for the next in line on his slab.

This is probably one of my favorite shorts on the disk. A rapid, bloody, and psychological film with a booming industrial soundtrack. There’s a hint of The Milgram Experiment in here as will, which gives this one a tinge of social commentary too.

Overall– There’s only one short on here that’s not worth seeing (and it made we want to gouge out my eyes with a deck screw), but all the others are worth a look. There’s a few films on this disk that I’ll watch countless times, and I really like how it feel more like a mixtape of short films than a "collection". It’s not all gore, it’s not all transgression, but there’s enough of everything to make this release an essential to genre fans. 8/10

PICTURE/ AUDIO– Each film reflect its own materials and budget. From millimeter to digital, it’s a pretty diverse group. It’s really hard to give an overall score, so as long as you keep in mind the sources and budgets, I’d say my score is flexible enough, give or take for certain films. 8/10

Again this is a flexible rating for the same reasons- various sources. This is a mixed bad of languages and subtitles. Two shorts have burned in subtitles that are pretty bad (like spelling tire "tyre"). The subtitles that have been crafted look good, and the audio mixes are all balanced within reason. 7/10

EXTRAS– Each individual film has their own extras ranging from commentaries to director bios to even music videos. They all vary, but most have at least the bio. The disk extras include two intros by Mitch Davis and Coffin Joe himself, T.V. spots for Fantasia 2005, the Small Gauge Trauma trailer (which sadly shows clips from amazing movies that aren’t on the disk), and footage from the 05 festival. This is a solid release that does each film, and Fantasia, justice. 9/10