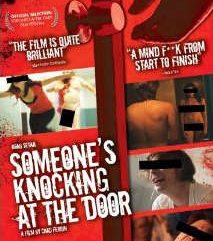 The Film– Here’s something that will knock you off your guard. This little flick begins with a knock at the door (bet you never guessed that), and a fully nude woman seducing a drug addicted med student. Of course this turns into some demented sex/ murder, but not in the way you would expect. I’m not kidding, this is some crazy ass stuff. The friends of the victim, who are all experimenting with a new needle drug that blows your mind, are taken in by the cops. They reveal that a few nights prior, they were snooping around the files in the hospital, and just happened to find the case study of a couple who raped their victims to death. Looks like this duo just ain’t done having their fun after all…

First off we’re treated to one insane murder. If you’re ever heard of "Mr. Hands", then you get the picture. From there on the film goes at a bloodless slow pace, telling the background and hinting at what might be in store for the group. They’re all on this new drug that stimulates your Pineal Gland, and this has some dangerous effects. They end up awakening the rapist killers, and the last third of the film is a rapid fire of the friends literally getting fucked to death.

The best way I can sum this movie up is a satirical homage to classic genre flicks. There are some Grindhouse nods, a wink at Blue Velvet, and even more than one glance at films like Session 9. The humor really works, and when you’re not being beat over the head with ridiculous deaths, you’re laughing your ass off. Imagine if Shaun Costello recruited John Holmes to make From Beyond. Easily one of the most inane killer genitalia films ever made, Someone’s Knocking at the Door is one hell of an insane flick that was a pleasant surprise.

This was a screener disk, so there will be no Package section in this review.