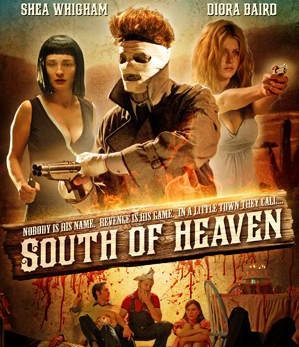 The Film– An offbeat cartoon intro sets up the carnage. A powerful mob boss, Mr. Bobo, receives a ransom note demanding “monies” in exchange for his daughter Becky. The note is signed Roy Coop, a one hit failure boxer who’s brother, Dale, is in the Navy. Aside from the demand, there’s also one of his daughters fingers taped to the paper.

Bobo sends out two green suited thugs to get his daughter back, and since the note was signed, they know exactly where to look. Roy and his “partner” Mad Dog Mantee make a run for it when the goons show up, but as soon as they leave Dale arrives at the apartment on shore leave. Hoping to find a warm welcome from his brother and start writing his “great American novel”, he is instead greeted by Bobo’s thugs, who mistake him for Roy.

After roughing Dale up for information he doesn’t know, they decide to remove two of his fingers (Bobo always likes to take double what’s been taken from him) with serrated pruning shears. As Dale lies on the floor, battered and bloody, a mysterious woman named Veronica walks in looking for Roy. While helping bandage his hands, Veronica explains to Dale that Roy and Mad Dog have gone on the run.

Mad Dog is the definition of sociopath, going on a cross country rampage while trying to avoid Bobo’s goons and still collect the ransom. Roy is less than reluctant to be traveling with him, but it’s not a good idea to argue. After leaving the apartment, the Mad Dog raided and murdered the occupants of a sweet sixteen party, kidnapped the birthday girl Lulu, and set up a hideout along Highway 301.

While Mad Dog gets his jollies off with Lulu, Roy chops off a second finger from Becky (who by this point is just a mummified hand), and sends out another letter to Bobo. Assuring Roy that they’re partners (“50/50 split”) and he won’t hurt him, the two settle in for the night. Too unnerved by Mad Dog raping the girl, Roy resorts to counting sheep with comically gruesome results.

Back at the apartment, Veronica has left to fetch more ice for Dale’s bruises. As soon as she leaves, the thugs barge in a second time, chopping off an additional two fingers. This cycle repeats a few more times until the goons decide Dale isn’t worth the trouble, claiming he’s a “nobody, and nobody don’t know nothing”. Burning his manuscript, then face, to a crisp, the two knee cappers leave him for dead.

Veronica returns to find Dale near death, but he soon realizes she has a big involvement in his brother’s troubles. After a scuffle that leaves her with a skull piercing, Dale sets out to get revenge everyone who wronged him. After bandaging what’s left of his hands and face, donning a trench coat and poofing up his hair, Dale becomes Nobody and sets out for revenge. He begins by hunting the thugs down.

Meanwhile back around Highway 301, an unfortunate mistake by Mad Dog forces the partners (“now it’s 60/40”) to scurry off to a new hiding spot. Mad Dog decides to visit his old friend Rooster in South of Heaven, TX who owes him a favor. Rooster lives with his love slave Lily, and Roy is immediately smitten. After some trust building exercises, the two partners settle in until the heat clears.

After exacting brutal revenge on the mobsters and buying the six barreled “Saturday Night Special for a Monday Night” pistol, Nobody makes his way to South of Heaven, where Mad Dog and Roy (who now have a “70/30 relationship”) are hold up. As ironic as it may be, as soon as Nobody arrives in South of heaven, everything goes straight to Hell.

Tied to each other and forced to act on Mad Dog’s whim, Nobody and Roy try to protect Lily from the nutjob’s growing sexual frustration. As the hours wear by Mad Dog becomes even more deranged, and the Coop brothers begin to from a plan to escape and get their final dose of revenge.

I can’t even begin to give my opinion without first exclaiming that I fucking love this movie. I haven’t seen such a unique film is years, and the visuals, characters, effects, humor, and story all combine to make one hell of a fantastic experience. Starting with the simple stuff first, the visuals are beautiful. Taking place around the end of WWII, the settings are very dusty and ragtag- almost rockabilly western.

The indoor scenes are very claustrophobic and minimalist and the outdoor scenes are just the actors with a drawn backdrop in the background. Other than giving the striking visual look of the film, it also forces you to focus on the characters, which are what steal the show.

The characters are essentially just over exaggerated Looney Toons with a dark side. Dale starts out as a completely unlikeable wimp and morphs into a cross between Darkman and Roland from Stephen King’s Dark Tower series. Mad Dog is completely, well… mad (he’s not crazy though, that’s why they call him Mad Dog not Crazy Dog), and goes from a jokster to a nutzoid over the slightest thing. Roy is your typical hostage, but his interaction with Lily (and trying to save Lulu from Mad Dog) gives his character a little more than one might think.

Typically I would dislike these characters because they’re all one trick ponies when it comes to range, but they’re designed that way. I never thought a static character could be so damn entertaining, but the dialog and acting create a cast that masters their one trait perfectly.

The only problem is, the crazy characters overshadow the “normal” ones tremendously.Take Nobody for instance. He’s only in the film for about 30 minutes, but easily one of the best characters. The look, the voice, and lack of fingers- everything is unique and totally badass.

Now take Dale, who pretty much allows the goons to chop off every finger and burn him to a crisp without raising his hand once. And he was in the goddamn Navy, it’s not like he doesn’t know how to end a motherfucker quickly. Again these characters are designed this way, and I know this was deliberate and not some accident from poor film making, but the overall insanity of the film makes the virtually normal characters seem kinda dull.

Now don’t get me wrong, this is not a flaw per say, just a mild annoyance, because South of Heaven was designed to cater to the more shall we say “unique” aspects. Like Mad Dog making a deal not to rape Lily if Roy trades him a Charleston Chew, or the counting sheep cartoon that shows the cute little sheep being mauled by a wolf. The film relies heavily on really dark humor, but there’s also a great deal of spoken humor that works well.

Like a discussion about prison that ends in “no questions asked, no asses questioned”. It’s a very sophisticated take on toilet humor that balances out the darker elements. But, if you’re not someone who takes well to running gags about rape, torture, and kidnapping then I highly doubt you’ll enjoy.

South of Heaven is a darkly light hearted revenge romp where a fingerless man hunts down the guy who forced his brother into a kidnapping plot- and if that doesn’t automatically draw you in, I don’t know what will. But when you add to that a demented sense of humor, excessive violence, uneasy nudity, and a cast of characters pulled right out of some Freudian diagram of the psyche, and you’ll have South of Heaven.

It’s not for everyone, but the people who like whacky little movies like this will have a blast. Yeah it does have a few problems here and there, but these barely take away from the experience of this truly one of a kind film.

The Package– Synapse have presented South of Heaven with a beautiful transfer. The print is super neat looking, and colors and black levels are spot on. There’s a moderate amount of noise through the film, but nothing that takes away from the overall quality.

The crisp and crystal clear 5.1 mix (also comes with a 2.0 track) lets the madness seep out of your speakers. The consistent volume, music and effects are at the appropriate levels, and overall clarity round out a near perfect audio mix.

Bonus material consists of three audio commentaries, one by director J.L. Vara, one with Shea Whigham and other cast, and the last being a “Critic Commentary” including writers for twitchfilm.com, fearnet.com, and badassdigest.com. The remaining extras are three shorts by J.L. Vara- Miserable Orphan, Azole Dkmuntch, and A Boy and His Fetus.