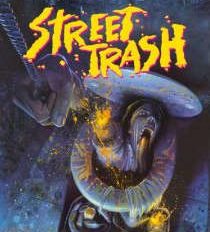 FILM– Two rival homeless groups live in a junkyard in New York. One is guided by Fred, made up of his little brother and a few transients they are friends with; the other is headed by schizophrenic Vietnam vet Bronson. While Fred and his boys just try to have some reckless fun, Bronson enjoys commanding his "troops" to bully anyone who crosses their path, even other hobos. After an encounter at a stoplight that leaves a nerd dead, tough as nails cop Bill sets out to end Bronson’s post-war insanity.

While all of this is going on, local booze shack owner Ed finds a crate of something called Tenafly Viper in the store basement. Whatever it is, it’s way past its expiration date. Ed decides to offer it for $1 to the grumpy hobos (many of whom just steal the damn stuff). The one dollar bottles of emotion killer are a huge hit, and soon almost every hobo in town has a flask full of Viper.

Only problem is Viper doesn’t age too well. Instead of getting better with age like a fine wine, Viper turns into a toxic, acidic substance that melts any flesh it comes into contact with. After narrowly escaping the hazardous Viper and Bronson’s goons, Fred, in a drunken frenzy, tries to warn others of the killer brew; however, his actions accidentally lead to a showdown in the junkyard between renegade cop Bill, Bronson, and somehow, the mob. Soon the rust field turns into a battle field, with sprinklers of human goo erupting everywhere- and not even Viper can bring Bronson down…

Street Trash is one hell of a movie, any way you look at it. It really feels like a TV series, because there’s about five main characters and four plots. In addition, the conclusion of the film takes over 30 minutes, which is about a third of the run time. What’s amazing is how all of these plots link together in a logical fashion. Seriously, do you think you could combine a "crooked cop" action movie, a comedy about hobos, a drama about a Vietnam vet, and a love story about a homeless man and a junk yard secretary, then add melting drunks into the mix? Writer Roy Frumkes (who also has a funny cameo as a yuppie who gets slimed by a melting hobo) should have been nominated for a damn Oscar.

The settings are fantastic. I’m weird obviously, but one thing really weird about me is my love for junkyards. I don’t know why, but there’s something about scrapped, rusted cars that I love. With that said, Fred’s home in this movie is a tower made of old tires. Bronson has a covered throne made of old car parts, and the junk has been formed into a makeshift hotel. I don’t know how many people will appreciated the work and detail that went into this set, but for someone like me, it makes you want to jump through the damn TV screen.

A big part of Street Trash is the offensive nature of the film. There’s racial humor, sexist humor, Vietnam jokes, rape, necrophilia, abuse of the elderly, torturing a hobo by giving him a bath, and a scene where the winos play hot potato with a man’s dick after he has it ripped from his crotch. Any movie that has a man moistening dead girl vagina with his spit, or a slow motion scene of a yanked off willy being playfully tossed around, is not designed to please everyone. It’s foul, it’s offensive, and it’s funny as hell. There’s not many movies like Street Trash out there, because it honestly doesn’t care who it pisses off, as long as it causes laughter. Oh and I forget the best part- after kicking the shit out of a hitman, Bill the cop rams his finger down his throat and yacks all over the corpse. Classy.

Even though Street Trash is known as a melt movie, only around a third of the film involves this. Most of it is just the bums playing around, and the cop trying to catch them before they kill again. But, when the juices do start running, it’s one of the coolest things ever put on film. It looks like someone took a fifty five gallon drum of Tutti Fruti ice cream, heated it in a nuclear reactor, then pumped it through these hobos. Every melt is colorful and slow and just damn fun to watch. Of course the most famous scene is the toilet melt, but there’s a few that top that one later into the film.

Street Trash is one of the most light hearted and fun films you could watch. It’s as serious as Andy Milonakis, and it’s bound to offend almost everyone. Only a brilliant mind would add body horror to this script, and they did just that. It’s a classic in it’s own right, and all cult film fans should have seen it at least once. 10/10

PICTURE/ AUDIO– Synapse has cleaned and polished this print so good, that if you couldn’t tell by the setting this was an 80’s movie, you would think it was shot earlier this year. I don’t think I’ve seen an older film look this good in quite some time, and this transfer really deserves respect. 10/10

Synapse has included the original mono, as well as a re-worked 5.1 track. Street Trash sounds fantastic on 5.1, with every squish and hiss coming at you from all directions. Nice volume balance, perfectly clear sound, and a lack of any distortions. The audio is as close to perfect as a movie can get. 10/10

EXTRAS– This version is a two disk set full of extras, but they’re pretty much exclusively on the second disk. On the film disk, you get two commentaries, one with director James Muro, and the other with the aforementioned writer/ producer Roy Frumkes, and the trailer. The second disk is where the goods are. It contains the original 16mm short film, a rare promotional trailer made from the 16mm footage, a behind the scenes photo gallery, and The Meltdown Memoirs. Meltdown Memoirs is a documentary by Frumkes that talks about literally every aspect of Street Trash. From casting to twenty years later, Meltdown Memoirs is a two hour "making of" documentary that is as entertaining to watch as the actual film. On an extra note, this DVD comes with double sided artwork and a really nice liner note written by Frumkes 10/10