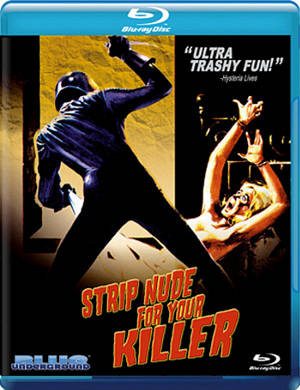 FILM- Late one night, an aspiring model visits a back-alley gynecologist to see about an abortion. Things go well at first, but she somehow falls into cardiac arrest (yeah it makes no sense, just go with it) and dies. The doctor makes a call to his “friend”, and the two dump the girl in her bathtub- making everything look like natural causes.

You know, because water is known to cause heart failure. As the doctor heads home, someone decked out in leather motorcycle gear stabs him from behind. This is where things might get a little mature, because the killer hacks off his family jewels and splats them on the doorstep. And somehow no one saw this. Huh.

Some time passes and we meet Ted Bundy, er, I mean Carlo (who all jokes aside would be the perfect guy to cast in a Lifetime movie about America’s favorite serial killer, the resemblance is dead on). Carlo is a fashon photographer for Albatross; an elite modeling agency ran by the fierce Gisella. While out relaxing by the pool in his neon speedo, he notices a woman who I’m sure always walks like she’s on a runway. Carlo pounces on the opportunity and begins photographing her. This woman is Kill Fodder, shit, I mean Lucia, and after hearing that Carlo’s pictures have appeared in Harpers Bazaar instantly falls for his “charms”.

After sneaking into the sauna for a nude photo session, Lucia notices the camera stopped making shutter noises after she took her clothes off. Carlo exclaims is “suddenly ran out of film”, but everyone knows a photographer with a silent millimeter camera is more dangerous than that creepy guy in a ratty trench coat in the alleyway who keeps asking you if his rag smells like chloroform. With the photo session cut short by this “unfortunate setback”, Lucia just lets Carlo put the fucks on her to ensure her audition with the agency. Oh 70’s, how politically correct you truly were.

Well he makes good on his offer the next day, and Lucia is inducted into the agency by Gisella. The two quickly become lovers however, much to the displeasure of Gisella’s overweight hubby Maurizio (who is more futile than Bevis and Butthead in his attempt to “score” with the uninterested models). Carlo begins dating fellow photographer Magda (played by the stunning Edwige Fenech), and things seem to go great. Up until the break-in that night at least…

Carlo’s rival at Albatross, Mario, breaks into his lab and steals a group photo of the agency, then returns home to wait for the killer, um, I mean buyer (damn you’d think these slips were almost intentional) to come and pick the picture up. Well the buyer comes inside for a drink, but the motorcycle suit already sets off the murder alarm pretty good. After getting the picture, you guessed it, the leather maniac stabs Mario to death with a switchblade before killing his dick. Transaction successful.

The next morning the cops are everywhere when one of Mario’s models finds his Bobbitt-esque corpse while trying to give him a ride to work. Suspicion instantly falls on Carlo, and I can honestly understand why. When you look like Ted Bundy, randomly strangle women for laughs, verbally degrade co-workers, and sleep around on your girlfriend, you tend to be labeled as not the nicest guy around. Since slimebag is out “hero” here, it’s up to him to solve the string of murders before the entire agency bites the dust.

Ah where to start. Strip Nude for Your Killer has got to be one of the sleaziest Giallo out there, right up there with Giallo a Venezia and What Have You Done to Solange. Forgoing almost every founding element (lighting, cinematography, actually having a goal other than crotch mutilations, ect), it’s only fun for all the wrong reasons.

Directed by Andrea Bianchi, one half of the sibling rivalry that created Satan’s Baby Doll and Malabimba- not to mention the super trashy Burial Grounds. This was the transition from sleek to sleazy- while keeping much of the style and flair of films done by Argento and Bava, these newer Giallo opted to also add some nudity, sexual violence, and trash to the mix. This resulted in some lesser quality but highly entertaining films, and nothing satisfies quite like this one.

Every good Italian slasher has a distinct look to the killer. Deep Red, Torso, Blood and Black Lace, and the list goes on. Having a killer who looks like they just came from the X Games is not a way to get on this list. And just in case you wanted to piss on the corpse of what little seriousness you actually had, why don’t you make the killer drive a compact car in full gear- at night no less! Oh wait, that shit happens a lot… Why does no one pull this fucker over? It looks like the Elephant Man or one of those Ohio Melonheads driving down the road.

The effects are your typical “nail polish blood” fair, with no gore being shown onscreen until after the murder. Oh, and by the way, I hope you’re in the mood to see what the killer does to male testis, because I don’t think it’s even fucking possible. This guy chops off cock ‘n sack and all in one go, and leaves the mess in one nice and neat pile. Um, wrong. Isn’t there one or TWO *wink* little things that should fall out? And going from memory of my biology class, I really don’t think dickflesh has that much structural integrity.

The only likable member of the cast is Edwige Fenech, who manages to covey being sultry and vulnerable perfectly. Other than her, the abortionist would be the next most likeable, because he wasn’t on screen long enough to be a piece of shit compared to the rest of the cast. There’s the playboy photographer with a mean streak, the queen bitch who runs the show and cheats on her husband, the model who begins sleeping with her in hopes of making it big, her husband who tries to blackmail/rape aspiring models, and the police inspector that’s about as competent as an Enron accountant. I hope you’re a misanthropic fuck like me, or you’re going to be miserable.

Also, um, WHAT THE FUCK IS WITH LEVIS? Seriously, there’s all goddamn kinds of product placement for Levis jeans. There are posters everywhere (including one Carlo plops his balls on while doing a handstand, just thought you’d like to know) and more denim than Willie Nelson’s closet. Why didn’t Carlo just say he was a photographer for Levis instead of making up all these random magazines, at least it would have been pretty fucking easy to prove. “Oh Carlo I can’t wait to see the studi- holy shit that’s alotta slim fit boot cuts!”

This is by no means one of the pinnacles of the Giallo genre, but it’s so much fun. Not quite a perfectly sleazy Giallo like New York Ripper, but I’d go as far as to say it’s the MADtv equitant of its genre. There’s a lot of fun to be had here, just expect it to be simple, illogical, and probably involving blue jeans. It’s just one of those movies that are fun to tear a new asshole, and believe me, it gives you everything you need to do so in the first half hour. If you’re more a House with the Laughing Windows and Suspiria fan who doesn’t get a kick by seeing some classic sexual violence done hilariously wrong, then this isn’t your cup of tea. But if you enjoy all kinds of Giallo and Eurotrash, then this is essential viewing. 8/10

PICTURE/ AUDIO- Blue Underground has delivered a beautiful transfer yet again. Void of any blemishes, grit, or scratches, this is the best Strip Nude for Your Killer has ever looked. The only problem relates to the film its self, and that’s because it’s really really dark in some places. Of all three disks I’ve seen (Shameless DVD, Blue Underground DVD and Blu-Ray) this is by far the best at masking the issue, and there is a clear distinction between shadows and the things that are lurking within them. 9/10

Included are the English and Italian tracks, both in DTS-HD Mono, and a healthy selection of subs to go along. I watched it with the English track and could find no problems. The hit-and-miss soundtrack doesn’t kill out the dialog, and everything is balanced and distortion free. 9/10

BLU-RAY- Another great design by Blue Underground. A fitting yellow scheme to the menu, not to mention several naked ladies, makes this release look great. Menu navigation and pop-up use are flawless, and everything is completely legible. 9/10

EXTRAS- The meatiest feature on the disk (which was included on the DVD from a few years back) is Strip Nude for your Giallo, an interview with screenwriter Massimo Felisatti and actress Solvi Stubing. Aslo from that disk is the international trailer. New material consists of a poster and stills gallery, as well as an extra trailer. This is an improvement by every measure and a must for Eurotrash fans everywhere. 8/10