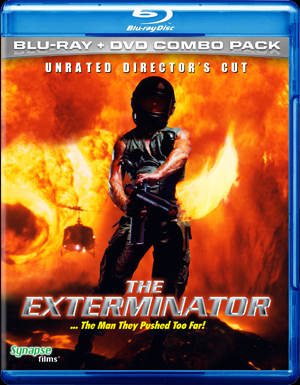 The Film– During the Vietnam war, Vietcong forces ambush an American squad days before a planned attack. Taking the survivors hostage, including out future vigilante John Eastland and his pal, Michael, the VC commander begin interrogating them for info on the planned attack.

John starts out silent, but after the interrogator chops off one of the prisoners heads with a machete, he is forced to give up the intel. Before he is executed, Michael manages to break free and rescue John, executing all of the Vietcong soldiers before air-evac gets them out of the red zone.

After the war, John and Michael return home to New York and begin working at a meat processing plant. Their lives aren’t the best, having to scrape by with low wages because the mob has a racket on the plant, but things are better back home. At least until the day they find a gang of punks- the Ghetto Ghouls, breaking into one of the coolers for beer.

John and Michael easily overpower the gang, and in simple terms, totally kick their ass. Well the Ghouls don’t take too kindly to their beating, and follow Michael home. After beating and strangling him with a chain, the leader digs a metal claw into his spine, paralyzing everything. Michael is sent to the hospital, leaving a wife and two kids behind.

John is furious, and sets out to take the gang down. After kidnapping one of the hoods and interrogating him with a flamethrower, he rats his friends out. Armed with an M16 he snuck back from the war, John heads over to the abandoned building the gang established as a clubhouse.

A fight breaks out, but John easily overpowers the thugs. After blasting one, he ties the other two (who were the main guys involved in the attack on Michael) up in the rat infested basement. When the cops finally arrive, they find the mangled bodies of the gang member, which the rats have turned into dinner.

Realizing there’s worse things in New York than just street gangs; John kidnaps the mobster who’s squeezing money out of the workers at the meat plant. Hanging him over a meat grinder, John gets his house keys and intends to steal the money back and give it to Michael’s family. The gangster tells him there’s nothing in his house that would impede his plan…

Well, nothing except the incredibly pissed off Doberman the mobster bought as protection. After quickly dispatching of the dog with an electric knife, John finds the money. He returns to the basement where the goon is hanging, and as punishment for neglecting to mention the not-so-friendly puppy, John mulches the mafioso into a pile of ground meat.

Calling the crime in to the news as “The Exterminator”, Detective James Dalton (the always awesome Christopher George) begins to realize the city has a vigilante mopping up crime. But not only Dalton makes this connection- the CIA, fearful of The Exterminator’s influence on potential voters come Election Day, also begins looking into the killings.

Setting his eye on sadistic pedophiles that run a child prostitution racket (and also love taking soldering irons to working girls they pull off the street), John continues his one-man war against the scum of New York City, burning through the goons one by one.

As Michael (confined to a hospital bed by this point) and his family still suffers, The Executioner is driven to purge the streets of crime. Eventually Detective Dalton beings piecing things together- but he’s getting too close, and soon he too will know what it feels like to be a victim of The Executioner!

Easily one of the most hyped films I can think of, James Glickenhaus’s The Exterminator is constantly referred to as one of the grittiest, goriest exploitation action films out there. An interesting tweak on the “solider comes home and is forced to start a new war” idea, The Exterminator is a fantastic mash up of Death Wish, Rolling Thunder, and Taxi Driver. It’s also one of the only films that’s ever surpassed the level of hype associated with it, and that’s almost unheard of.

With the slew of revenge (and general exploitation) films of the 70s and 80s, it’s a good guess that The Exterminator is considered one of the best for a reason. Well, there’s actually several. The first is a solid performance by Robert Ginty, who is a total bad-ass in this movie.

You know how some actors out there embody the character they play? Paul Kersey is Charles Bronson, Clint Eastwood is the Man with No Name, ect. Characters that fans just refer to by the actor who plays them? Well that’s what The Exterminator did for Ginty.

Despite failing to attain the level of regard as Bronson or Eastwood, Ginty went on to star in several more action films, the best being White Fire with Fred “The Hammer” Williamson (as well as the mediocre but still fun Exterminator 2). Regardless of his filmography, fans always refer to him as The Exterminator- not “the guy who played The Exterminator”. That shows you the caliber of this performance.

What also makes this film particularly deserving of its fan base is the relentless violence. It’s not realistic at all, but at the same time it’s not over the top. Hard to describe, but I guess the easiest way would be if someone completely over-did a revenge plot.

“Why would I shoot someone when I could just chain them up and lower into a meat grinder” is a perfect example of this. And the effects are the same; pretty realistic, just visceral as all hell. Highlights include beheadings, brutal shootings, and the most shocking scene in the entire film- soldiering iron torture.

Maybe it’s because I have actually burnt the shit out of myself with a soldiering iron before, but that whole idea is just fucked up. While not a thing is shown on screen, just seeing the demented pervert dipping the hot iron into Vaseline and slowly walking towards a chained down girl is enough to make me cringe. And then a few minutes later you see the scars left on the girl and it really drives everything home.

While Ginty is The Exterminator, the film also owes a huge debt to the performance of Christopher George as Detective Dalton. Aside from being a complete bad-ass in his own right, Dalton has these little moments of pure WTF that make his character memorable. Like rigging up the wiring from his desk lamp to two forks, then cooking a hotdog using electricity.

Most people would be like “who the hell would do that”, but when it’s Christopher George doing it, nothing has to make sense. This man literally cooks a wiener using his fucking lamp, and still manages to be a totally bad mother fucker. When you combine this with Robert Ginty lugging a flamethrower around, you know under no circumstances will this movie suck.

Not to discredit Glickenhaus’s work as director in the least, because there are multiple aspects of the film that shine out from a technical standpoint. The lighting is often deep red, and when mixed with the settings of abandoned buildings or leather-coated brothels, it gives a distinct look. Also the plot is fantastic, satisfying the basic need for revenge on the street gang, yet having The Exterminator go after targets that the audience will end up hating even more.

I was really afraid this film would not live up to years of hype, but after finally watching The Exterminator, I can say it lives up to every word. Dark, gritty, visceral, gory, violent and cruel, this truly is one of the best exploitation action films ever made. The Exterminator deserves to be held at a level of regard that matches Death Wish or Rolling Thunder. It’s that damn good.

The Package– Synapse has yet to disappoint with their Blu-Ray transfers, and this is no exception. Despite some odd damage early on (that kinda look like the Saran Wrap filter on Photoshop), the quality levels out quick. A clear, vibrant picture that occasionally boasts a moderate level of noise; this is an undistorted, very natural feeling transfer that looks fantastic on Blu. I hold it in second highest regard when it comes to Synapse Blu-Rays, right under the fantastic quality of Embodiment of Evil.

A Restored 2.0 Stereo track is also included, but I watched with the 2.0 HD Mono and it sounds amazing. Some of the dialog tends to be a little on the quiet side during a few scenes, but nothing majorly distracting. I always prefer a 5.1 track, but with the complete lack of distortion, clarity, and (for the most part) great balance, I really can’t bitch too hard.

The few extras (which will be mentioned next) and limited set-up options really benefit from this Synapse basic Blu-Ray design. While this design works, my only concern is that it will become stagnant soon, or cluttered on an extras-heavy release. Regardless, this design complements this release with a simple and easy menu system, legible font size, and an animated menu.

A commentary with Glickenhaus, the theatrical trailer, and six T.V. spots are all that’s included with this release. In all honesty, I wasn’t even sure if there would be extras, because both of the main actors have sadly passed. While the quantity is lacking, Synapse didn’t break my golden rule of always including at least the trailer. Not much more could be expected sadly.