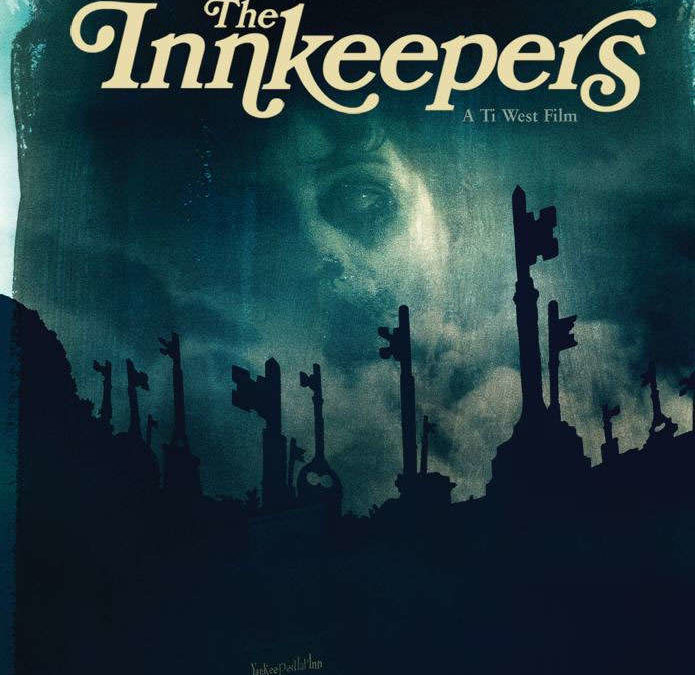 The Film– The Yankee Peddler has seen better days. After over a century of business, its doors are finally being shut for good. Actually, the doors, along with the rest of the building, are going to be torn down to make way for a ritzy new parking garage. Oh America, how beautiful your respect for the land truly is.

This situation leaves desk attendants Clair and Luke in a bit of a pickle. The owner is out of the country, seated comfortably on some tropical island with a Margareta in each hand, and they’re stuck working the final weekend before the inn is to be leveled. This guy right here, you wouldn’t believe how many A’s he managed to get in Business Management 101.

The duo aren’t as upset about the lack of a job as they are the lack of a hobby. See, like every grand inn all over the world, the Yankee Peddler has a ghost story. Luke and Clair have been trying to catch proof of the ghost(s) in the hotel using an EMP recorder, and Luke has even made a website (and I thought I sucked at web design) to archive their ghostly recordings.

For a while now they’re been trying fruitlessly to contact Madeline O’Malley, the holy grail of supposed specters that haunt the building. O’Malley was a rather unfortunate bride ditched at the altar, who proceeded to hang herself at the inn. Her corpse was supposedly stored in the basement for three days before being smuggled out to avoid bad publicity. Needless to say, if her spirit is indeed wandering the halls, it’s not in a good mood.

It’s around this time that grizzled ex-actress Leanne Rease-Jones checks into the hotel. Having strayed from acting to become, for lack of a better term, a psychic (but that little drinking spell didn’t help her career much either), she chose the Peddler because it was right down the road from a convention for those with an “extra bit of perception”. After Clair completely geeks out over meeting her childhood role model, Leanne coldly brushes her off.

Claire starts a recording session, and this leads to the first paranormal event she has even encountered. While in the lobby at night, the piano suddenly strikes a key. Scared and ecstatic, she accidentally wakes up Leanne during her mini-freakout. This is when she reveals her special gift, and with the help of a crystal pendulum, the actress is able to make contact with the spirits. There are three total, and they’re angry. And Leanne also recommends that Clair never go into the basement.

The following morning, a mysterious man checks into the hotel demanding to stay in room 353. Despite the entire third floor being stripped of T.V. and furniture, the man is content with just a bed and some sheets. He tells the receptionists that he wants to spend one last night in “the room where he spent his honeymoon” before the inn closes. His arrival doesn’t cause much worry with Luke and Clair, who spend the final afternoon getting drunk.

After several beers, the two are pushed into “schwasted” territory, and the good ol’ liquid confidence makes one last EMP investigation into the basement seem like a fantastic idea. After Clair and Luke begin their recording in the room Madeline’s body was stored in, things quickly begin to spiral into complete chaos. As the night progresses, the spirits of the Yankee Peddler Inn finally confirm their existence in a fatal way.

Ti West is a name horror fans should know off the top of their head. Director of Cabin Fever 2 and the surprise hit House of the Devil (not to mention the upcoming V/H/S); West has shown his competence in the genre and then some. In my opinion, The Innkeepers solidifies West’s ability to make one hell of a horror film, but with some subjective flaws.

The biggest issue many reviewers have had is the time it takes to finally get to the horror element. There’s no way around it, The Innkeepers only becomes a horror film in the last 15 or so minutes. While some people will find, and have colorfully expressed, displeasure in this aspect of the film, it didn’t bother me too much. My only real issue is how suddenly it just plunges into the horror aspect. There are one or two little scares here and there, then suddenly OH SHIT my face was just pushed through the ground and I’m staring straight into hell!

While some people are calling this a slow burn film, which is kinda it, there’s a little more to it. It’s not exactly a full on slow burn since the first hour or so is nothing but dialog driven humor. In many ways it feels like a companion piece to House of the Devil, only with a much more satisfactory (but still not 100% solid) ending. Now it works great, and it’s funny and entertaining, but, um, isn’t this a horror film? There’s only two scary moments I remember during this time, and one of those was a “screamer” that Luke uses as a hoax on Clair.

The final issue I had was how suddenly the film changes direction. Like I said earlier, two scares in over an hour, then all of a sudden it gets dry mouth, eyes watering, blanket over your face scary. It almost feels like you just crashed landed into Horrorville, and while that’s obviously a good thing, it just feels rushed, hence the annoyance. And to avoid spoilers I’m only going to mention this once, but the conclusion is sad as all hell. Laughing for an hour> oh shit now I’m scared> wow now I suddenly feel a heavy depression. See where I’m coming from?

See here’s where I’m stumbling with this review. There’s 85% of the movie, and then the last 15 minutes. While both are great and enjoyable to their own merits, if you consider they both came from a horror movie, you can see where this gets a little annoying. But since the sum more than equals the parts, I honestly can’t bitch too much, so enough complaining, because I think the movie is actually very good. The characters are likeable, the humor is quirky, and the scares are, well um, scary. You laugh at how stupid that sounds now, but when’s the last time you have genuinely been scared by a film? I mean yeah there are a few little jump scares here and there, but most of this is a pure sense of creeping terror.

There’s not much I can talk about without spoiling something here. I got a little hung up on the “slow burn” aspect of the film mainly just to tell readers that will be their make or break decision. If you can handle the lengthy buildup, then you’re in for one horrifying conclusion. I’ve already said I greatly enjoyed it, but I know some people just won’t be able to handle almost an hour and a half with pretty much zilch on the scare meter.

While it seems like I’m bashing the fuck out of the movie, 1) It only has one issue, and some people might not even see it as that, but your enjoyment depends on how willing you are to wait- and 2) the film is very action and dialog oriented, with no major plot development until the very end, meaning “looking for ghosts” and “waiting until the ghosts appear” is pretty much the constant.

The Innkeepers is a damn good ghost film that incorporates aspects of modern “dorky” humor with an atmosphere and visuals that bring back memories of the 1977 The Sentinel (which, just in case ya don’t know, is one of the scariest movies ever made). The story, acting, cinematography- hell, everything about this movie not related to the pacing of the story is great, and even people who don’t like it for specifically that reason will admit the above.

My only true complaint is the sudden flip to pure horror coming so fast, and while some people might find the time leading up to the scary bits a flaw, I don’t. I’m just saying people could see it as that. If you have the patience to wait it out until the final act, this is a highly entertaining and terrifying film.

The Package– Dark Sky has presented The Innkeepers in a beautiful 1080 HD transfer that looks fucking amazing. I haven’t seen a transfer this clear and natural looking in a long, long time. A blemish free picture with natural noise and popping detail makes this one of the best looking Blus of the year.

The audio mix is a DTS-HD 5.1 track that sounds amazing. Everything is balanced, crystal clear, and distortion free.

This is your basic tabbed blu-ray with some cosmetic tweaks. Everything is easy to read and navigate, and the pop-up menu looks great. It’s styled in a very old pattern that could either be wallpaper or carpet, and I love guessing games. Also it’s fully functional during the film with no main menu-kickback.

Bonus materials include a behind the scenes featurette, two commentaries, and the trailer. Both commentaries feature director Ti West, the first putting him with the producers and second unit director, and the second with stars Sara Paxton and Pat Healy. Pay attention to these commentaries, because they shed some info on the ending that I missed on my first go around, but was able to pick-up on the second. It’s worth it, trust me. There are also a few Dark Sky trailers that play before the menu boot.