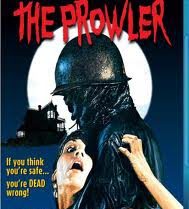 The Film– In 1945, a WWII solider returns to him hometown of Avalon Bay, expecting to find his girlfriend, Rosemary, waiting for him. Instead, he is greeted with a "Dear John" letter, which prompts him to go into psychotic killer mode.

As it turns out, Rosemary was at a Graduation Ball that night with her new guy, and since this is a slasher film, they ingeniously decide separate themselves from the rest of the dance. They head out to a waterside gazebo, but their make out session is cut short when the solider kills both of them with a pitchfork.

Coming back to the present (aka 1980), a group of college girls have decided to organize the first Graduation Dance in 35 years. Rosemary’s father was the head of the school, and after his daughter’s violent death, he never allowed the dance to take place again. Well since he’s confined to a wheelchair now and can’t bitch too hard, this seems like the prefect chance to revamp an old tradition.

For some reason, all the girls at this particular school are smitten by the deputy (because I forgot young women always prefer someone who will arrest them over typical college guys), who will be the only cop working on the night of the dance.

The sheriff has reports of a crazy maniac on the loose about three cities away, but this is the weekend of his annual fishing trip, and he’s not about to let the safety of others come between himself and a big mouth bass.

After the sheriff leaves, Deputy McHunk is free to do whatever the hell he wants, and decided he’ll head to the dance. Unfortunately, the psychotic solider isn’t too happy about the dance starting back, so while the girls get dressed up for the night, he grabs his bayonet, pitchfork, and shotgun- then sets out to kill as many innocent people as he possibly can.

While The Prowler does suffer from the slasher stereotype of "fuck plot, tits and gore all the way", it’s still one of the most memorable and unique hack ’em up films of the 80’s- mainly due to Savini’s fantastic gore effects and the killer’s attire. Even Savini himself says this is among his best work, and seeing teens being brutally massacred by a killer in army fatigues is really a ballsy move on the film makers.

So yeah, the plot of this film is weak. It was originally called Rosemary’s Killer (which sounds like some Lifetime movie), but I think The Prowler is much more fitting- mainly because he kills way more people than just Rosemary. And that’s one of the biggest flaws about this film, the killer’s motives is never explained.

Sure you can say he wanted to relive his murder decades before, but even that doesn’t make a whole lot of sense. He wasn’t killing because of the dance, so why would he suddenly flip his shit that the town is starting the tradition up again. But the good thing about slashers, as long as the body count is high, motive is never a big issue.

On to the gore, which is pretty much legendary by this point in time. Savini’s work is amazing, and the scene where Sgt. Slaughter here stabs the bayonet through a character’s skull is unbelievably realistic looking. I mean this guy even rolls his eyes back in his head like he’s convulsing from the brain damage, that’s what us horror fans love to see.

My only big complaint about the movie is that it’s REALLY easy to guess the killer. As soon as I say this person I was like "yep that’s him", and I was right. It doesn’t really take you out of the movie because the plot is so goofy anyway (at least in my opinion), but that is part of the fun with these films, so it was a bit of a let down.

Despite it’s bizarre and sometimes illogical plot, The Prowler is a gruesome, one of a kind slasher that can still hold it’s own. It’s not one of the best retro slashers by any means, but it’s something every 80’s horror fan will love.

The Package– There’s no sugar coating it, this transfer is pretty heavy on noise- but I’d rather have some snow than see the print absolutely violated by DNR. There’s some minor damage here and there, but aside from a decent layer of noise, it’s nothing too bad. The fine details look great, and the black levels and colors balance out nicely.

This is a really good sound mix, epically for a film this age. The soundtrack and overall volume fit great, and aside from some mild distortions here and there, nothing else is amiss.

Blue Underground has designed the Blu-Ray to include a Main menu and simple Pop Up menu, with everything being easy to navigate and see. In short, this is a simple but effective structure, and since there’s not many extras, that’s really the best thing to do for a release like this.

There’s a 10 minute behind the scenes with Tom Savini, which is pretty much an essential watch for any fan of 80’s horror, and the trailer. Not much, but what’s there is entertaining and fun to watch.