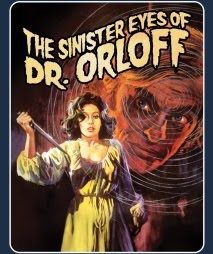 The Film– Melissa is the troubled heir to the Comfort fortune. She’s been paraplegic her entire life, and has suffered terrible nightmares. The nightmares have gotten worse recently, and every time she drifts off to sleep, her mind replays her bloody father walking towards her before keeling over.

As her nightmares worsen, her half sister, Martha, and her aunt and uncle begin to worry. They think she’s going off the deep end, but the butler, who has been at the mansion his entire life, thinks they are up to no good. Her family calls on a friend, the psychologist Dr. Orloff, to make a visit and see Melissa.

After the butler openly shows his unrest with Orloff coming to the estate, he wheels Melissa to the garden, where the good doctor meets her for the first time. After bluntly informing her that he was more than a family friend (in layman’s terms, he would have been her daddy), he also tells Melissa that her family is up to no good.

That night Melissa has another terrible nightmare, but this time, she walks towards her uncle and slashes his throat. Her sister and aunt pacify her, because Uncle Henry went on a hunting trip just that morning. Well, a few hours later, the local Inspector (Edmund Purdom!) gets a call that a body has been found dressed in womens clothing. It’s Uncle Henry.

Well since the coroner is out that day, the police call in Dr. Orloff to administer the autopsy. It’s around this point that we see his sinister nature, because apparently he’s planning a huge vendetta against the family of the woman who wronged him- and Melissa is his instrument of revenge.

The only Orloff film I had seen prior to this was The Invisible Dead, and holy shit are they different. William Berger plays the mad doctor this time, replacing Howard Vernon, who was Orloff in all other films.

As far as the character, he’s went from a mad scientist to an evil psychologist… who happens to also be a medical doctor and anthropologist. It’s like Franco wanted you to realize this guy is a doctor, because he is literally practicing multiple fields. I was waiting for a woman to ask him for gynecological exam, or at the very least find out he was a pediatrician too.

Another difference, this film is virtually bloodless. There’s maybe three drops in the entire film, and those are within the first five minutes. In all honesty, I really liked that. Instead of having a bloodbath like Faceless, or some outlandish creature like in most of the other Orloff films, this outing actually has some atmosphere. There’s a foggy scene that results in murder, and the closest thing I can compare it to is Argento’s Phenomena. It doesn’t have tons of blood and nudity to make the film cheesy, because that honor is saved for the plot!

I am not kidding, the plot to this film is the most illogical thing you will ever hear. I can’t reveal much of it, but when you find out how Orloff works his evil magic, you’re going to laugh your ass off. Everything he does is physically impossible, and feels like a Franco dumbed down plot of Oldboy. Now it’s not a bad film, but the plot devices are easily the goofiest, cheesiest things about the film. Aside from the fact that a soft rock musician solves the case before the inspector based on one visit to the house…

The Sinister Eyes of Dr. Orloff is a unique film that is as interesting as it is absurd. It’s almost devoid of the classic Jess Franco sleaze, but the over the top plot and story make everything balance out well. And Edmund Purdom is always a plus to any film. If you don’t mind a simple plot that is distorted to astronomically goofy proportions, then you can’t help but enjoy this one.

The Package– Intervision is a company that seems geared towards VHS fans. As many know, I am a VHS fan, so I love this idea. Orloff is presented in a Fullscreen transfer that looks sourced from a tape of some sort (even though it was actually from a 1" master), with bleeding colors, ghosting, ect. Now I really like this, and it makes me want to watch the movie on my old wood-paneled Zenith, but the HiDef freaks are going to shit a brick. I love what this company is doing, and in my opinion this is a fun idea, but I’m not sure how others will take this transfer.

The Spanish audio track is a decent mix for the age. It’s got the standard pops and distortions, but a set of English subs are included. This is the problem, these subtitles have a mind of their own. Sometimes they jut off the edge of the picture, sometimes they appear about an inch too high, and sometimes they just stop working all together. I hope this problem was only a glitch on my DVD, but there’s about a ten minute scene where the subtitles just cut off- and it’s a VERY vital scene in the film. That’s not even including the small annoyances like extra characters being placed in a sentence.

The only extra is an interview with Uncle Jess, but it’s more than welcome to this DVD. Again he’s fascination to listen to, and this featurette is no exception.