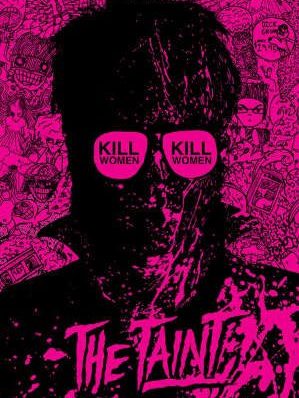 The Film– Phil O’Ginny is the ultimate ladies man. A one-of-a-kind man, Phil seems like the byproduct of a one night stand between Peter Parker and Duke Nukem. The kinda guy who alternates between aviators with black and white frames, and has the best mullet I’ve seen since 1995. While in the woods fucking yet another girl, he is suddenly ambushed by a sickle-wielding killbilly who’s out to chop his cock.

Phil flees into the woods, where he finds gore and viscera strewn everywhere. After emptying his stomach at the gruesome site, an insane, large cocked man tries to bash his head in with a rock. Moments from death, he is saved by a shotgun toting woman, Misandra.

Apparently Phil’s been out of the loop for the past few days, so Misandra explains what’s happened. Something gotten into the town water supply, and when men drink it, they have become demented murderers who will kill women (usually by bashing them in the head with a rock) on site. A few days ago, she was forced to kill her own husband.

The two set out through the woods trying to find an untainted well, but while searching they run into Mr. Houdini- Phil’s high school gym coach. He’s became the leader of a gang of surviving men who haven’t drank any water- but regardless they’re just as insane.

Houdini wants to gang rape Misandra, but Phil draws his pistol (which he casually carried to school a few days prior). Houdini becomes enraged, and the gang chase the duo down to make them pay for the cockblock. While Phill is getting his ass worked over, a mysterious masked stranger with bladed gloves comes to the rescue, tearing the would-be rapists face off.

This mysterious character is Ludas, who promises drinks for them both. After following him to his hideout/ basement, Ludas explains he must wear the mask because his own face was torn off by the same gang of men. He also explains the origins of the mysterious, cock swelling taint.

This drug was introduced into the water by a man with a small penis for the betterment of mankind, but everything backfired. Ludas appears to be trying to find a cure, but Phil senses he might have a different intention for himself and Misandra. As Ludas begins to expose his true nature, Phil begins to suffer tormenting memories about having to perform a coat-hanger abortion. Will Phil become another misogynistic killer, or will he be the ultimate cock blocker?

The Taint is a very in-depth film about social prejudices and stereotypes. It also has the highest number of erupting penises of any movie ever. This oddly sophisticated splatter film (in the most literal sense) not only managed to entertain the hell out of me, but also cast a unique, sarcastic vibe about femininity in American culture.

I’m just fucking with you, this movie is an offensive, disgusting, semen soaked thrill ride. I’ve yet to see a movie where a gang of hung, ejaculate spewing men ritualistically light a woman on fire then stomp her face in. Now don’t let the tagline “kill women” make you think this is a sexist or hateful film, because in all honesty it mocks men three times harder than females.

The male characters, including Phil to some extent, are literal pigs.
The totally sane Mr. Houdini (an in-the-closet character) is a hilarious example of this. He’s more disgusting socially than any the rock wielding maniacs, and personally my favorite character.

Before I got too carried away, I wasn’t entirely joking about the social commentary. There is actually quite a bit, but all for the sake of a laugh. Examples include “small penis syndrome”, feminism, ultimate masculinity, and most importantly, cockblocking. All of these social problems begin on a serious tone, but almost imminently turn into a gross-out gag or punch line.

In my opinion, this is not really that offensive of a movie. Maybe because I just don’t get worked up about gender roles or having a big penis (No need to brag when you know you’re packing the biggest gun in the room). But with that said, people who are easily offended (and if you are, why the fuck are you reading my website?) will probably think the devil’s wet dream is playing on their T.V. screens.

Depending on your view point, The Taint will either offend you to the point of causing a personality complex, or entertain the hell out of you. I mean how many movies have you seen that manage to be sexist, masculine, and have homoerotic montages?

The Package– The Taint is an independently distributed disk, and in most cases that means DIY conversions that leave the film muddy and washed out. This release managed to surprise me, because the picture is super clear and sharp. It does have some digital noise and pixelation here and there, but I’ve seen studio releases look much, much worse.

The audio track is overall great, but there are some spots of volume fading and slightly muffled dialog. It’s nothing too distracting, but it is an obvious drop in quality. The soundtrack, however, is a booming retro score that matches the film perfectly. I really, really dig the music. Also included are some optional English subs.

The disk only has three extras- a commentary track, the teaser trailer, and the full trailer. Not gonna lie, the trailers kick ass. You can find the teaser on YouTube, so if you haven’t seen it yet I highly urge you to watch. I would have really, really liked to have seen a behind the scenes feature on the effects, because they are seriously top notch work. Also is a limited run of 88 VHS available at the film website, and any modern day filmmaker who released their movie on tape automatically get brownie points from me.