Thou Shalt Not Kill… Except Blu-Ray Review 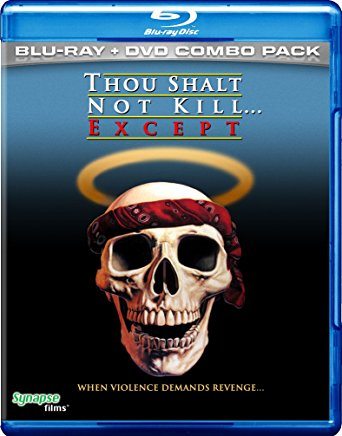 The Film– Opening with some leftover footage from the intro to Cannibal Holocaust, I mean, Vietnam, we are plunged headfirst into the jungles of Hell. Here we meet Jack Stryker and his team of rag-tag soldiers (who make those guys from Battlefield : Bad Company look like the Green Berets). After a punji trap takes out one of the soldiers on the outskirts of a Vietnamese village, the war becomes personal.

Deciding to wipe the village off the face of the earth, Stryker and his team get into position for the ambush. Well, like it always went in Nam, shit hits the fan quick. The villagers come out with guns blazing, slaughtering almost everyone and popping Stryker twice in the leg. Sgt. Jackson picks up the injured Stryker, and get this shit, gives him a piggyback ride and rushes into the village.

I’m not kidding, this tank of a man gives Stryker a piggyback charge of death into the village, massacring all of the combatants and saving what’s left of the unit. But after the battle Stryker is forced to head home on honorable discharge because of his busted leg. His three war buddies, Jackson, Miller, and Tyler all stay behind.

It’s around this time that we meet the cult that’s been terrorizing the area around Stryker’s hometown. The leader is played by Sam Raimi, and is a grungier, murderer version of Charles Manson (who’s appearance I’m sure did not influence the look of Jack Sparrow at all). A Tate-esque rampage ensues, and the locals in the area become increasingly terrified at the brutal murders committed by the cultists.

Stryker returns home, now walking with a cane, and immediately picks up his dog Whiskey from the kennel. He lives in a nice little cabin deep in the woods (oddly enough it’s just on the outskirts of the KIA Campground), and the town do-gooder Otis brings him groceries and booze. Jack had a relationship with Otis’s granddaughter Sally before the war, but she got pissed and left him because he had to return to Nam before he could take her to prom (mainly because Vietnam had Robin Williams as their DJ and the prom probably had some horrible bastard with an iPod full of Spice Girls and Brittany Spears, just like any high school dance).

Jack begins seeing her once more, and after a great day together, they plan to have a picnic the following afternoon- but as you can guess this probably won’t happen. Stryker’s war buddies have finally made it back home, and somehow just happen to be rolling through Jack’s hometown. They stop at Otis’s bar for directions, and after a night of drinking, fighting a motorcycle gang outside the bar, and fucking some hitchhiking women they pick up, decide to head out and see their old C.O.

Their arrival makes Jack forget all about Sally not picking him up for their picnic, and four soldiers take the opportunity to booze it up and pop off some using the guns Jack smuggled back from the war. After ruthlessly murdering an outhouse with their shotties and rifles (just going to show you that hard liquor does improve your accuracy after all), they head back to the cabin to crash. Things seem fine, at least until Stryker notices his dog missing.

See, Sally didn’t ditch Stryker that day- she was abducted by the cult, who proceeded to use her grandfather as a target to brush up on their sharp-implement-throwing-skills. While the guys were out killing that outhouse, and their brain cells, the cult rounded up the entire town for a blood sacrifice to appease their leader, who thinks he’s Jesus. While out looking for Whiskey the guys come across the cult, and immediately grab their guns and do what soldiers do best.

Thou Shalt Not Kill… Except is one of the movies I remember the owner of my local rental shop recommended I watch as a kid, but I never got around to actually seeing it. Created by Josh Becker and Scott Spiegel (who I would say are to Raimi what the View Askewniverse is to Kevin Smith), it also could possibly be the best film title of all time, far superior to the alternate Stryker’s War (same as the short film it expanded upon). The weird thing is, I haven’t heard the movie mentioned at all in nearly a decade. It wasn’t until I got the press release a few months back that I realized this is one of those movies I always wanted to see, and now I’d finally have the chance to check it out.

I think it’s weird people aren’t more active about this film, because it was surprisingly better than I thought. I mean it didn’t have a very good DVD release back in the early 2000’s (a pretty ugly looking Anchor Bay disk), and I can see people not talking about it constantly, but it’s just weird for me to think that it’s been such a long time since I’ve heard any mention of such a fun movie. And when you consider the title and the fact that B movie god Sam Raimi plays a pretty large role in it, it makes it that much weirder. Or maybe it’s just because my circle of influence sucks and all my acquaintances are boring as shit.

The beginning Vietnam scene is, well how should I put it… retardedly awesome… Let me just give you a few highlights- a Vietcong soldier turning Caucasian, a brutal shootout with some of the crudest guns I’ve ever seen, a knife tied to a shotgun to be used as a bayonet with baling twine, and the whole piggyback death charge that somehow manages to result in god knows how many deaths. Oh and let’s not forget the small details, like the lovingly placed “Kill a Commie for Mommy” poster they’ve made out of an old cardboard box, just for that extra oomph.

After Nam things begin to slow down, the only major action point being an attack by the cultists. This is an homage to the Sharon Tate murders I mentioned earlier (completely tasteful, by the way), and pretty much acts as a tease for the final fight against Stryker. These are great villains, and are a cross between the LSD loving Satanists from I Drink Your Blood and the gangs from Deadbeat at Dawn. Sam Raimi nails the crazy ass leader to a tee, and has some of the best lines in the movie like “don’t touch the sacrificial fluids”. Also be on the lookout for a cameo from Ted Raimi as the masked cultist who has a fetish for chains.

There’s some surprising character development with Jack Stryker, and while the actor Brian Schulz is not pro by any means, he’s convincing and entertaining. I mean who can go from a disgruntled cigar-chomping army dude to a disgruntled handicapped drunkard army dude? That’s range, and that’s talent right there people. But in all seriousness, he really does a good job. And just in case you’re a total movie nerd like me, Timothy “I’ll stand by ya” Quill who played the Blacksmith in Army of Darkness is one of Stryker’s buddies.

Now I know everyone wants to know the answer to one question- how awesome is the fight between the army guys and the cultists. It’s not quite Chuck Norris vs a T-Rex awesome, but pretty damn close (and after almost three years of chastity I finally made my first Chuck Norris joke). These guys fondle Sally with bloody hands, kill people with lawn darts, and actually engage in some pretty badass action with Stryker’s squad.

Thou Shalt Not Kill… Except is an incredibly cheap movie, and that’s said with nothing but love. It has that very armature, gritty look that most low budget 80’s movies did, but for this outing it causes some unintentional humor here and there. The good thing is there is a ton of intentional humor, so it mixes nicely. Not just what causes the humor, but the overall humor and violence also mingle pretty well. The ending fight with Stryker and Jack Sparrow (fuck it, I’m just going to call it as I see it) is a prime example, and has possibly the best one-liner-before-killing-a-motherfucker since “Hasta la vista, baby”. Just trust me, it’s golden.

All in all it’s just a low budget, gritty, comical, violent movie that feels like a mix of the already mentioned I Drink Your Blood and Deadbeat at Dawn, with a little Rolling Thunder and Combat Shock thrown in to even shit out. I honestly can’t tell if it’s meant to be social commentary or just a fun movie, but either way it would be the Bevis and Butthead of Vietnam political statements. It’s not going to blow you away, it’s just fun. It’s fun in a basic way that almost every modern action flick fails at, and even though there are some dull moments here and there, this is a damn entertaining movie that you should check out.

The Package– Synapse have presented the film with a really nice 2k transfer that looks good. There’s a few hiccups here and there, but overall the picture is consistantly distortion free. It was shot on 16mm however, so expect a health coat of noise and grain, espically in the darker areas. There’s also an interesting story about a restoration company royally fucking up this transfer on the Synapse blog, and when you consider the effort put forth to present a good looking, natural, non DNR picture, you can appreciate this transfer that much more.

The audio mix is the original mono track presented in DTS-HD. It sounds as good as possible, which considering the material says alot about the quality of work Synapse has put into this disk. Everything is balanced and dialog is easy to hear.

Again the basic tabbed Blu-Ray layout is used for this release, same as all other Synapse Blus to date. Navigation is simple and the menu functions well. I’m not too impressed about the background animations of the main menu, but thats just a cosmetic annoyance.

Since I never bought the old Anchor Bay disk mentioned earlier I can’t say what is new material and what has been brought over from that disk, but I believe everything supplements wise is included from the AB release. There’s a making of featurette called Made in Michigan, clocking in at about half an hour long, the alternate title sequence under Stryker’s War, the original Stryker’s War short (with Bruce Campbell playing the titular character), an interview with Bruce Campbell, a deleted “puking” scene with optional commentary, and the original trailer. As for commentaries, there are two- the first with Campbell and Becker, and the other with Stryker himself Brian Schultz and Red Shirt Pictures own Michael Felsher. Also there is a reversible cover that uses the original skull artwork. The first Blu-Ray of the year and already Synapse has set the standard.