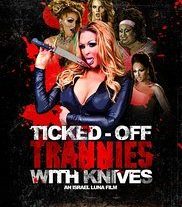 FILM– When Bubbles, a transgendered dancer, arrives at her club with a mean looking shiner, all of her friends try to figure out how it got there. She blows everything off, and after the dancers finish their routine, they all head out for drinks. A duo of Latino boys set their eyes on two of the ladies, and after some smooth talking, convince them to head over to their house later on- but they want Bubbles to come along as well to entertain their friend who’s waiting at home.

After using Bubbles as the DD, the three girls arrive at the boys house (and by house, they really meant to say dilapidated warehouse/tool shed). After some quality peer pressure, the girls head inside to find the two men they expected, and their friend- a grungy, baseball bat wielding tranny hater named Boner.

Turns out Boner slipped Bubbles a Ruffie cocktail the night before, and decided to get his jollies off with her still unconscious; however, when he found out she wasn’t really a “she”, he decided to rough her up and rape her anyway. Hellbent on revenge (because he was obviously tricked into raping a non woman, and there was no way he could have pressed the “abort mission” button), he begins smashing the girls up with his bat. After a desperate phone call, the other dancers show up- but the incident leaves two dead and Bubbles in a coma.

Soon, Bubbles awakens with a lisp and fury, and enlists her friends to help get revenge on Boner and his meat head friends. After learning their way with knives, the girls set up a mousetrap of revenge, carnage, and skin tight body suits. With Boner and his posse about to be cut to pieces by the vixens, they’ll be luck if they make it out with just greased up assholes…

TOTwK is presented in a grindhouse style. The film has digital manipulation to make it look broken down over time, complete with “missing scene” messages and reel change text. I can see influences from directors like Tarantino and Waters, and since they’re two of my favorites, the style this movie has really took me back. Speaking of Tarantino, it has unreal cinematography- like during an extended scene of dialog where the camera circles continuously without changing speed. Plus, it has places that obviously make a nod to Quintin’s “foot fetish”.

Now, maybe you’ve guessed by now, but this film was made as an eye opener to homosexual hate crimes. Instead of going like Gandhi, which many alternative groups do, director Luna went with the Malcolm X approach. Fight fire with gasoline- sometimes it works, sometimes you just blow your ass off. In the case of TOTwK as a film, it works, and creates one of the most surreal, bizarre, and intelligent revenge films ever made. As far as a political statement, with me being a straight man, I don’t feel I have a place to call this one (but I will say you can only push people so far before they start to shove back).

For straight people like myself, this movie gets into some odd territory. After seeing it, I am now aware of the art of “duct taping”. What makes this film succeed is it’s sense of humor. It tires to be offensive, trashy, and politically incorrect- and it is. Very. But, it’s presented in a way that doesn’t act all hum drum serious and makes you laugh. John Waters films are not only viewed by homosexuals, and this is one I can say fits the same bill. As long as you like that trashy, 70’s style of film, you’re going to have a blast (regardless of orientation).

Overall, TOTwK is not a film that shoves it’s politics down your throat, but it’s more than a simple midnight movie. It actually makes you think (epically since it was protested by GLAAD) about how the worse treated minority in the world (think about it, even other minorities say stuff like “that’s gay” all the time) is going to react when they’ve finally had enough. Yeah there’s not many people like Boner out there, but there’s some (like these beautiful folk), and that’s a disturbing thought. TOTwK is as entertaining as it is political, and if you have an open mind, you’ll have a blast with this one. 9/10.