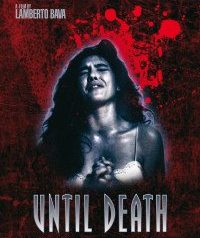 The Film– Linda and her lover Carlo were attempting to dispose of her husband, Luca. The film begins with the duo en route to bury his corpse in a muddy swamp; however, he’s not all the way dead, and in a last attempt at survival rips one of Linda’s earrings out. After this small incident, the two finish burying Luca, and return home.

That was eight years ago. Linda and Carlo run a bed and breakfast/ diner (it was built by her late husband) that’s very popular with the locals. They all believe Linda’s story about Luca leaving her and their son, Alex. No one expects murder, but the paranoid Carlo constantly thinks the customers know more than they let on. Alex begins to suffer nightmares where his rotten father (the fact it’s Luca is unknown to him) returns from his muddy tomb for revenge. Suddenly, a stranger shows up looking for a place to stay. He knows a little too much about the couple, and his presence worsens Alex’s nightmares, Carlo’s paranoia, and Linda’s guilt. They soon find out their new tenant is dangerous, possibly supernatural, and has Linda’s old earring…

Lamberto Bava is an interesting director. I think that his eagerness to do violent, tasteless horror like Macabre, A Blade in the Dark, and Demons as opposed to his father’s lush and artistic films was a ballsy move. It paid off for him in the long run, and many of his titles are still MIA on US DVDs. Well, you can scratch Until Death off that list. I had no prion knowledge about this film until the disk appeared in my mailbox. A little research revealed I have a copy under the X Rated Kult German label, titled as Per Sempre; however, this is a far superior release.

It was a made for TV flick, so there’s not a whole lot of violence, and no nudity at all. If you’re expecting something like The Ogre, then make a detour. What this flick lacks in gore it makes up for in creepiness. Alex’s nightmares are actually kinda scary, epically one where his zombified dad breaks through his bedroom wall. You can tell Bava is his father’s son, because even on an obscure made for TV flick the cinematography is great.

In all honesty, the film makes no sense. The stranger’s appearance makes no sense, and the last half hour of the film seems to replay the same scenario over and over. If you like logical thinking in your supernatural thrillers, then avoid, because this is far from logical. For what it is, Lamberto Bava’s Until Death is an entertaining, semi- creepy supernatural thriller about honoring your vows.

The Package– When I first watched this, I was very let down. The quality is very soft, print damage is everywhere, and everything looked like it was outlined in black. Then, just for the sake of review, I popped in the X Rated Kult release, which was 12 times worse. I’m assuming someone left this film’s print in a vault of sewage, because it didn’t hold up well. Now that I have a reference point, I can say Mya did a nice job. It is rough looking, but it’s a hell of a lot better than could have been.

There’s none here, except for chapter selection and the audio tracks. When I found out this was a made for TV movie, I could accept the lack of extras, because the chance of any existing (or even holding up through the years) is beyond low.