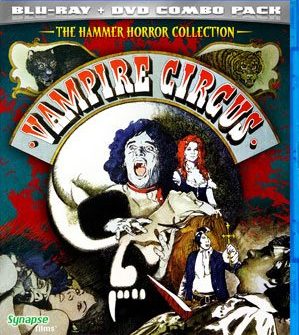 The Film– During the 19th century, a schoolteacher, Albert, sees his wife, Anna, leading a small girl to the castle of the villages ruler, Count Mitterhaus. Mitterhaus is a vampire, and has been using Anna to bring the local children to his residence. After toying with the girl supernaturally, he feasts on her blood.

Apparently blood is Anna’s biggest turn on, so they start getting all over each other. Albert has pieced things together, and rounds up a mob to end the Count’s killings. After prying his wife from Mitterhaus’s arms, the schoolmaster drives a stake through his heart. His dying words promise a return via the deaths of the villagers children. Anna rushes back to the Count’s side, where the villagers blow the castle up with gunpowder, entombing Mitterhaus in an underground crypt.

Fifteen years pass, and there hasn’t been a single vampire. There is, however, a plague that’s rapidly killing the villagers. Even though the children are still alive, the village fears this is supernatural work. To restrict the outbreak, the government has put up a roadblock to keep the citizens from leaving the town. One day, a traveling circus shows up, and promise to preform that night. Despite the schoolmaster and his friends insisting the troupe explain how they got through the roadblock, they keep silent.

The performance includes everything from a dwarf mime to a shape shifting man (who can change into a panther). Initially suspicious, the people begins to warm up to the circus, which has brought a sense of relief to the disease ridden village. One girl falls a little too in love with the circus, mainly the shape shifter, Emil. The only problem is she’s the mayor’s daughter, and he doesn’t want his daughter with a carny.

While the doctor is looking for a cure to the plague in the capital, the circus performers begin to lure the children into the hall of mirrors, where they suck them through the glass and into the Count’s crypt. The vampire performers start to use the blood of the children to resurrect their dear Mitterhaus, but the villagers begin to suspect them when mauled bodies start to show up (Emil’s handy work).

The schoolmaster’s daughter comes back to town from the capital, where she had been staying to avoid the sickness. Unfortunately, she’s one of the last children who’s blood is needed. While her father begins to piece the murders together, the vampires begin their final hunt for the children needed to resurrect Count Mitterhaus. Turns out Emil is his cousin, and the female ringleader might have ties to the town as well. The circus will stop at nothing to return life to their fallen brother.

I know this is something most horror fans would be crucified over, but this is one of the the first Hammer film I’ve seen. I’ve been exploring Italian and Japanese horror for years, and I never took the time or energy to look into many of the Hammer movies. With that in mind, Vampire Circus was nothing like I imagined it to be.

Everyone knows about Hammer’s Dracula staring Christopher Lee ( or at least one of the classic revivals), even I’ve seen that one. I expected Vampire Circus to be very similar, but I was really, really wrong. Diehard Hammer fans will already know this, but their movies from the 70’s really were actually pretty graphic- at least based on my prior conceptions about the studio.

There’s a few gruesome scenes where characters are mauled by Emil in panther form, and it’s got more than a few scenes of nudity. Also, child killing is a topic most movies won’t touch with a 50 foot stick, so for Vampire Circus to make it the central plot was pretty damn ballsy. It even shows a large number of the killings without cutting away, and when the parents find the bodies it surprisingly disturbing.

The movie has got some goofy effects and blood that looks like nail polish, but it manages to pull of a really creepy Victorian atmosphere. It’s not too ambitious with it’s effects, and uses simple but convening ways of showing the animal transformations and mirror tricks. Aside from a few cheap looking stunts, the film is solid. This is a fantastic vampire movie, and, hopefully it will get the respect it deserves. If you want a great bloodsucker film that doesn’t involve mythical creatures fighting over an inanimate bitch, then I can’t suggest this enough.

The Package– Synapse has presented Vampire Circus in a 1080p anamorphic transfer. Aside from a dusting of static caused by the age of the film, this transfer is perfect. There are maybe five specks of damage through the entire film, and it’s only dots. This is a great transfer, and a phenomenal job on their first Blu-Ray.

The audio is a 2.0 track, but it has nice balance and sound. There are no distortions and the dialog and soundtrack merge perfectly.

Synapse knows what they are doing with this format, but there’s still a few things to be tweaked. They have included a main menu, as well as a pop-up menu, and both look and function nicely (if not a little bulky). The text is clear and stylized, and the chapters are easy to navigate. The only real issues to me were the chapter listings, which is restricted to the bottom of the screen. It only shows four chapters at a time, and the titles are somewhat hard to see. It’s really a minor quabble with the crap I’ve seen on Blu-Ray before, and I like how the titles are included- but I want to be able to see them at the same time.

Synapse has included a 30 minute making of retrospective called The Bloodiest Show on Earth,Gallery of Grotesqueties- a survey of horror films with carnival settings, a look back on the horror comic and movie magazine House of Hammer, a motion comic book of the films "prologue", animated stills and poster galleries, and the trailer. The featurettes are between 10 and 30 minutes long, and are hosted by British horror journalists who know everything about Hammer. Fantastic stuff.