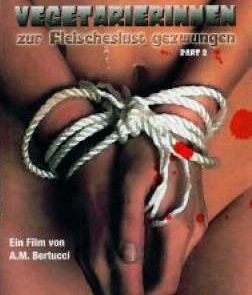 The Film– Vegetarierinnen zur Fleischeslust gezwungen Part 2 is a neo- roughie from "The German D’Amato", Andreas Bethmann; only it’s not rough. At all. The basic plot is that women are raped and killed by a psycho who takes pictures of them. After he kills them, he comes home, jerks off to the pictures, burns them, and repeats the cycle. A woman stumbles into his hideout, and begins to pleasure herself (logical). Of course he captures her, rapes her, and ties her up; she gets loose, kills him, and escapes. The end. That’s actually not a spoiler, because: A) the DVD shows him dead on the back of the box, and B) this is the prequel to Exitus Interruptus, so you know he must be dead if you saw that one.

Where to start? This flick is miles better than Part 1, but that’s like saying bamboo splinters under your fingernails are better than needles. This is in color, as opposed to the first which was B&W. Another thing that’s cool about this one is the rapist’s mask. It looks like a Teraz Films prop, and adds to the fun factor. Like I said, this is not rough at all. There’s no dialog (the conversation the rapist had with his victim in the first one was what made it unsettling), and all the "victims" seem eager to have sex. And they enjoy it. While tasteless, this film is actually kinda entertaining (epically the Texas Chainsaw Massacre homage). The girls are as grungy as hell- as can be expected (with the exception of Renee Pornero). This film is as erotic as herpes, so the only way you’ll enjoy it is if you treat it as Waterpower, not Behind the Green Door. 7/10

The Package– Shot on DV in 2002, there’s not much that could have went wrong with the transfer. Everything is nice and clear, and I didn’t see any pixelation at all. Another thing I should point out is that most American DV films are rough looking; not these. I have to say, Bethmann has a good camera.

The audio is scored on the worst curve I have ever encountered. There’s no dialog at all, and really no sound effects (maybe three gunshots). All we get is lots of music that would sound better in an elevator than paired with scenes of rape, but whatever. In that aspect, it’s impossible to mess up.