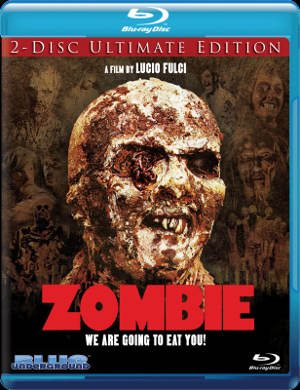 The Film- One morning a seemingly deserted sailboat shows up in the New York Harbor, catching the attention of two patrolmen. Thinking the boat could fetch them a pretty penny, they hop onboard to make sure it’s vacant. While one officer stays above deck to secure the sail, the other checks the cabin below. Suddenly, a humongous zombie breaks through one of the cabin doors, ripping the officer’s throat out with one bite. As the walking corpse makes its way topside, it is gunned down by the second officer and falls into the water.

The police begin to question Anne Bowles, whose father is the owner of the boat. With the cops throwing their weight around, she decides to sneak into the boat later that night. After creeping onboard, she meets a news reporter, Peter West, who is covering the story. After some harsh words, the two find a note from her father stating he has contracted a rare disease on the tropical island he was working- Matool (or as some spell it, Matul), a small speck of land in the Antilles. The elder Bowles writes that he knows he will never leave the island alive.

Worried about her father after reading his letter- not to mention the “homicidal lunatic” that was on his boat, Anne wants to travel to Matool to check on him. Realizing the potential story at hand, West agrees to travel with her, having his boss (an almost unrecognizable cameo from Fulci) book them both a flight to the Dominican Republic. After pulling some strings and throwing around some cash, Peter finds a young couple with a boat, Brian and Susan, willing to take them to the island.

Local superstition is that Matool is cursed, and most people avoid it like the plague. One of the only non-native inhabitants is Dr. Menard, who is determined to find a cure for the mysterious disease plaguing almost everyone on the island. Using the local mission as a base of operations, Menard has watched countless islanders die from the sickness (then re-animate) over the past several days. Ignoring his wife’s pleas to leave, Menard insists on staying and finding the cure.

On the way, Brian stops to let his girlfriend do a little underwater photography (in the nude, no less). While photographing the coral and fish, a hulking shark appears. Well, not just a shark… there’s a zombie too. And if you guessed they begin to fight and rip each other apart, you’d be dead right. I know this is a paragraph is written a little unprofessionally, but I can’t contain myself when I am describing the overall awesomeness of a great white versus a fucking zombie!

After getting back in the boat, Susan automatically begins to protest the trip to Matool. And I would do the same thing if I just witnessed the undead duke it out with a killer fish. Well of course they press onward, arriving just in time to meet with Dr. Menard at the mission. The doctor, swarmed with dying patients, begins to explain how the dead on the island are returning to life as flesh eating zombies. While unexplained, the locals attribute the zombies to Voodoo. As the sunlight dwindles down, the zombies begin to converge on the rickety mission, attempting to devour the flesh of everyone inside.

First off let me explain why the plot summer is so vague and straightforward. If you have seen Zombie, you’re probably just reading this review for the Blu-Ray related stuff (and possibly my opinions on the film). But, if you’re one of those rare souls who hasn’t seen Zombie yet, I am not about to spoil one of the best horror films of all time. That would just make me an ass. Now on to the good shit.

Lucio Fulci’s Zombie, what is widely considered to be one of the best zombie films ever made- possibly even one of the best horror films in general. It was originally marketed as a sequel to Romero’s Dawn of the Dead under the title Zombi 2 (Dawn of the Dead was released in Italy with an alternative score by Goblin as Zombi), but lost the “2” and added an “e” for the American market.

What makes Zombie work so well is a perfect mix of pacing, story, and effects. With everyone talking about how insane and gruesome the film is, and believe me it is, it’s pretty easy to overlook the brilliant plot. Instead of the cliché virus, nuclear radiation, or any other overdone method of waking the dead, the resurrections in Zombie are based on Voodoo (which is why it was released as Woodoo in Germany). A movie over three decades old still managing to be vastly more original than 90 percent of the zombie films made since- now that’s saying something.

While there are “fresh” walkers, the majority of zombies are rotten and decrepit, having risen after being buried for hundreds of years. They have such a unique look that it almost takes you back, swapping blood and gore out in favor of worms and decay. Peeling, moss covered faces and decomposing robes work so much better than just a bloody, shambling corpse.

Now that’s not to say there aren’t gore-soaked zombies in the film. After the zombies attack, what’s left of their victims return as well- but it highly favors the decay. I really, really don’t find zombies scary at all, but the overall vibe these bastards put off could creep anyone out- especially the infamous “Worm Eye” zombie.

It’s also worth noting the way Fulci filmed the zombies. The majority of undead you see are in a huge, menacing flock that congregates to the mission during the climax of the film. In fact, there are only about three zombies shown until the last half hour or so. Now when a single zombie is on screen, Fulci uses an upward headshot, giving the impression the zombie is looming over its victims. It’s actually pretty damn intimidating, and you get a real sense of dread every time a zombie appears.

The gore effects are legendary by this point, everything from throat ripping to the infamous eyeball gouge scene. Just like the zombies, a majority of the gore is reserved until the end- but oh shit does it go off the deep end during the final act. Exploding heads, dismemberments, blood flying everywhere, and flaming zombies are just the beginning. The fantastic pacing satisfies your gore lust in small spurts through the film, and then completely indulges you in a total zombie massacre.

Now that isn’t to say Zombie is without flaw in the least, but they’re so insignificant compared to the rest of the film. Just small things like West and Anne just teaming up within a matter of seconds. Let me get this straight, someone broke onto your dad’s boat and found a letter explaining his probable death- not to mention that a zombie was on the same boat and killed a cop just hours earlier, and you automatically know with ironclad certainty that you want to travel to a cursed island with this man? Yeahhhhh. Little illogical moments like that.

Despite the few “ORLY” places here and there, Zombie nails everything it should about, well, zombies. With brilliant effects, a great setting, and an explanation for the returning dead that’s still original to this day, it’s blatantly obvious how Zombie is easily one of the best living dead movies out there. If you haven’t seen it, you are missing out in more ways than you can imagine.

The Package– Blue Underground have done a fantastic job with this transfer, putting in hours of work to make Zombie look phenomenal. The colors are rich, and there is almost no grain to speak of- let alone major damage. But, this transfer does have an Achilles Heel- about half of the time the picture looks a little too soft. I can’t tell if it was the print used, or overuse of DNR (which I highly doubt considering Blue Underground has a pretty good track record with their transfers). Zombie does look the best it ever has, but the softness can really be annoying in some of the super bright scenes. Regardless, this is a beautiful transfer and the best Zombie will ever look. The softness is not a major problem, it just keeps the picture from looking “perfect”.

Taking into consideration the overall quantity of audio options (a 5.1 and 7.1 DTS-HD track in both Italian and English, plus the original mono tracks in both languages as well), the quality of the tracks are just goddamn excellent. My only gripe was that I had to turn the volume up pretty high to get a comfortable listening level, but the balance and quality makes this a onetime annoyance (at least with the 5.1 English track on my system). These tracks are flawless, pure and simple.

For even some of my favorite companies out there, it seems disk and menu design is usually in the mediocre to sub-par range. Now if you remember my little love spiel about the Torso release, then you can only imagine how great the Zombie Blu-Ray looks. Flawless main and pop-up menus, awesome opening animations, and a prefect theme of rot make this one of the best uses of performance and presentation I’ve seen on any BD ever- and that’s just the first disk. Instead of re-doing the same design, it’s a completely different layout for the second disk. Little pulsating maggots crawl around the screen while you select your featurette of choice. I’m droning on and on now, so let’s just say it’s safe to assume this disk is probably the best put together package of any Blu-Ray out there.

Blue Underground originally released the film as Zombie on a bare bones DVD after the Anchor Bay release went out of print, but not long after Shriek Show unleashed a two disk set with unimaginable extras (under the Zombi 2 title). It was stupid to think they wouldn’t one-up the Shriek Show disk eventually, but I REALLY wasn’t expecting it to be this damn good. The first disk contains an intro by Guillermo del Toro, audio commentaries with Ian McCulloch and Diabolik Magazine editor Jason J. Slater, a still gallery (with a contribution from myself), and the trailers, radio spots and T.V. spots.

Disk two is everything you ever wanted to know about Zombie, and is packed with interviews. Included is Zombie Wasteland- with stars Ian McCulloch, Richard Johnson, Al Cliver, and Ottaviano Dell’Acqua. Flesh Eaters on Film- with co-producer Fabrizio De Angelis. Deadtime Stories- with co-writers Elisa Briganti and Dardano Sacchetti. World of the Dead- with cinematographer Sergio Salvati and costume designer Walter Patriarca. Zombi Italiano- with effects artists Gianetto De Rossi, Maurizio Trani and Gino De Rossi. Notes on a Headstone- with composer Fabio Frizzi. All in the Family- with Antonella Fulci, daughter of the Maestro. And finally Zombie Lover, with Guillermo del Toro talking about one of his favorite films. I can’t find a single negative thing to say, and if anyone out there can, somebody please punch them.