The ABC’s of Love and Sex: Australia Style Review 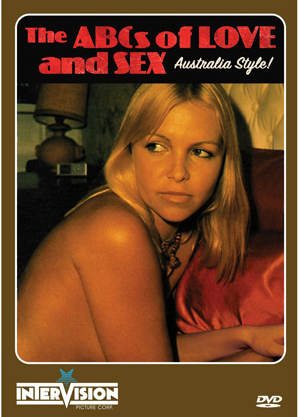 After an introduction with some oversized letter blocks (you know, those things children play with…), the lesson begins with A for Anatomy. After getting the oh so difficult differences between peni and vagini out of the way, it moves on to birth. From there things get a little, um, fucking weird. As the film slowly winds to a climax of sorts, and yes I was shallow enough to make that joke, we cut back to the clay students, overjoyed about having just seen their first adult entertainment masterpiece.

At lease an action movie has a plot I can touch on, but this is just snippet after snippet of odd, sometimes hardcore scenes with a theme related to sex. I mean of course I have an opinion, and it is a pretty enjoyable little sexploitation flick, but there’s not much more to talk about than that. The next few paragraphs are some of the highlights, but since there’s no comprehensible plot to the film, this is probably going to feel like it came from a Chuck Palahniuk novel.

Something that is really clever about The ABC’s of Love and Sex is the title cards for each letter, at least most of the time. Like B is for Birth has little stick figures popping up all over the place, and M is for Masturbation has a diagram of a volcano. These are all done as chalk drawings with stop motion animation, which I assume was going for that classroom feel, but ends up being a little creepy. While most of them are really cool and often use some cheesy visual pun, others are just bland and drab, like X is for eXcellence (that’s fucking cheating!!!)

It’s also interesting to see the complete differences between letters in terms of visual style. Some use sexual imagery, some use seductive dialog, some use symbolism, some use artsy camerawork, some use hardcore porn, and some are just footage of people discussing the topic. There’s no balance, so if you prefer the more serious nature of some segments, 1) you’re shit outta luck, and 2) why the fuck did you decide to watch a film called The ABC’s of Love and Sex? Regardless, the clips whiz by fast, so if one bores you, by the time you’re ready to move on, the film is already at the next letter.

There is one clip though that sticks in my mind, and I’m sure it will with everyone who sees it. It’s R is for Rape, and basically has a Forced Entry style clip of a pantyhose wearing man attacking a woman. Well while this is going on, the narrator is talking about how different a sexual kink is from rape, and that rape is bad. I’m going to hold every bit of my “ORLY” comments I have in, because a Mr. Louis CK can say everything I would ever hope to about such a statement. Was the 70’s really that dense of a time?

Now the one thing about the entire movie that bugged me was how lazy the last few letters were. I mean the final clip is of course the letter Z, but the theme is “Z is for…..” and then it cuts to some dance number with the big letter blocks and women wearing onesies. I’m dead fucking serious, I waited until the very end of this film to see how the letter Z plays into love or sex, and instead I get a goddamn interpretive dance? Are you shitting me?

I doubt the casual fan of 70’s hardcore films will enjoy this, and in all honesty they will probably be bored to death. It’s worth a watch if not just for the sheer oddness of it, and it does deliver what is promised. The full title is The ABC’s of Love and Sex Australia Style, and I see no false advertising here. If that title doesn’t sound like your cup of tea, then you’re probably not going to care, but if you’re a fan of Ozploitation or the weirder side of Sexploitation, I’m sure you’ll get a kick out of this bizarre little teaching experience.

The Package– A moderate coat of grain and fuzz (no pun intended), but overall a clean transfer that surprised even me. This is a much better looking transfer than expected, especially when compared to other top companies who release forgotten sexploitation.

You know how some older films have that distinct sound to the audio mix? That rough, gravely sound that constantly reminds you “wait I’m still in some year during the 1970’s”? Well that’s how The ABC’s sounds, but it has one little problem that will drive you insane. Every time a word with the letter S is spoken, it sounds like someone quickly brushes two pieces of sandpaper together. Not enough to necessarily annoy you, but just enough to make you twitch a little bit.