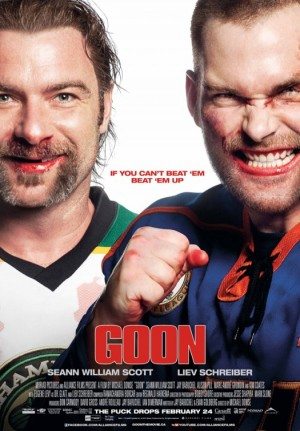 After arriving on day three and catching the final show by Rocketman that I described earlier, I finally caught one of my most anticipated films of the entire fest- Goon. Sean William Scott plays Doug “Thug” Glatt, who after beating the royal shit out of a raging hockey player finds himself the new enforcer of the Halifax Highlanders. This not-quite-major-league team has had nothing but bad luck following the complete wrecking of their star player by the most notorious enforcer in the sport, Ross Reah. Doug takes on the task of stomping, punching, head-butting, and generally demolishing the competition, but romance, an upcoming playoffs match where he must face Reah, and his general stupidity make life bittersweet for The Thug. This movie was great, mixing completely vulgar humor (“nice face period!”) with over-the-top fights that really remind me of something out of Tokyo Fist, especially how battered Glatt looks by the end.

Between shows I finally got a chance to talk with Mitch Davis, and if you don’t know that name you deserve to be mauled by a goat. Aside from being the producer of one of my favorite films, Karim Hussein’s Subconscious Cruelty, he also directed the shorts Divided into Zero and God’s Little Girl. Oh, and did I mention he’s the head programmer of FantAsia Film Festival, the biggest and best gene film fest in the world? So having a conversation about the dark side of Canadian cinema with one of my idols is easily something to cross off the bucket list. 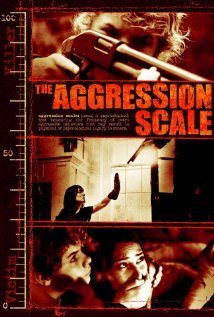 I ended my trip with a screening of The Aggression Scale, which I can best compare to John Rambo’s Home Alone. After stealing a hefty chunk of change from a certain “businessman”, Bill and his family become targets of the retrieval crew. What these guys don’t know is why the money was stolen, and it has something to do with a bribe, Bill’s son Owen, and some highly alarming mental aggression test charts they find after breaking into the house. Despite a slow and almost tedious opening act, The Aggression Scale really gathered its thoughts and delivered a clever, tight, and brutal experience. Owen is a complete badass, using everything from sharpened jacks toys to hubcaps and then some to survive. The newest incarnation of Jason, Derek Mears, plays one of the thugs (who really seems to be the guy getting the most punishment), and it was a pleasant surprise to see Gummo’s Jacob Reynolds in the gang as well. The lackluster opening, and a surprisingly annoying ending really keep The Aggression Scale from shining out, but the ways Owen completely brutalizes his attackers still manages to deliver a satisfying film.

Just want to give a quick thanks to Matthew Kiernan and Peter Kuplowsky for letting me cover the fest. After this weekend I’m going to eat a few salads (the price I must pay for concession food avarice) and prepare for AF2013.