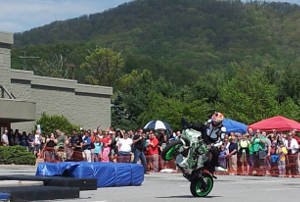 My second day began with the stunt show, which if you don’t know is an ActionFest tradition. This year they started things off with the Gunfighters of Ghost Town, which have been a part of the Maggie Valley, NC attraction of the same name for decades. After the shootout, Mark De Alessandro- stuntman for Sylvester Stallone, set up the stunts. There were karate fights, rope repelling, and the iconic stuntmen jumping onto an air mattress that ActionFest is known for. But to shake things up this year, one of the gunslingers decided to hitch a ride on the lift and was shot back down by his gang. Let me repeat that. Gunslinger> shot down from a mechanical lift> fell 50 feet onto a big ass air bag. I felt like I was behind the scenes of Django, and Mickey Gilbert was really digging the western theme.

And then came Crazy Mike and his motorcycle. My pictures really don’t do it justice guys, this man is insane. Everything from handlebar riding, to standing wheelies, to stopping on a dime and head-butting Rocketman (who I’ll get to in a minute). He even came to a dead stop, whipped the bike almost 45 degrees, and used his back tire to smash a Pepsi can. This guy was insanely good.

Unfortunately a solid two days of nothing but burritos, pizza, and popcorn made standing in the sun almost unbearable for me, so my friend and I went in around this point. While cooling off in the lounge, there is this sudden “whoosh” that shakes the entire theater. It sounded like whatever was hovering over the roof was trying to decimate the place with a sonic disruptor. This was Rocketman, the only man I know with the gonads to strap a jetpack on and blast off dozens of feet into the air. See, I had been inside and didn’t hear the “this thing is loud as shit so cover your ears” warning, so, yeah that was fun. I did end up catching Rocketman’s last flight on Sunday evening, and the extreme noise and total ignorance on my part to forget earplugs means no pictures. Instead of pulling out my camera, my hands were firmly clasped over my ears.

Following the stunts I checked out The Day, which is pretty much Book of Eli combined with one of those “tower defense” games you would find on Newgrounds.com. A band of rag-tag survivors of the apocalypse take shelter in an abandoned house when one of the members falls ill. Expecting to stay only through the night, they suddenly realize the house has a few surprises that might keep them planted for a while, the most notable being an approaching cannibal army intent on making them lunch. While the action was great, the story is again just a re-telling of something we all know. I don’t know why movies taking place after some disaster love to completely overuse the grayscale, but this one takes it to the extreme. Flashbacks are bright and vivid, while the present is bleak and gloomy. I get it movie, things were good, now they suck. Please stop reminding me of this. I mean it’s brutal as hell (and two scenes in particular will REALLY shock the audience, trust me), but there’s so many storytelling fumbles and unoriginal aspects that The Day really didn’t stand out in a sub-genre that already has some of the best action movies of all time. 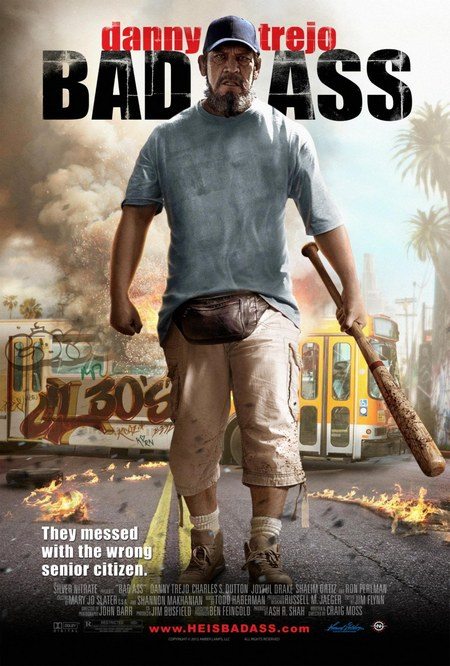 Rounding out the night was Bad Ass, one of the best movies screened this year. Danny Trejo plays Frank Vega, an aging hotdog vendor who becomes an overnight sensation thanks to a viral video of him beating the living piss out of some skinheads on the city bus (a twist on the Epic Beard Man video from a few years back, only this time the hero doesn’t turn out to be completely mentally unstable). Things begin looking up for Frank, but when his only friend is gunned down over a mysterious USB drive, he straps on his fanny pack and begins chewing through the city’s scum looking for answers. Possibly the most unexpected idea for a movie I&rsqrsquove ever heard of, this actually turned out to be a hilarious, bloody, action packed film that delivered on almost everything. There’s just one thing about this that irks me (and not just Bad Ass, it’s just the one I’m choosing to pick on)- STOP USING CGI BLOOD PEOPLE! It’s not hard to get some Karo syrup and red food dye, and I’m willing to bet in the long run that’s a hell of a lot cheaper than paying someone to digitally add something as minute as a bloody gunshot.