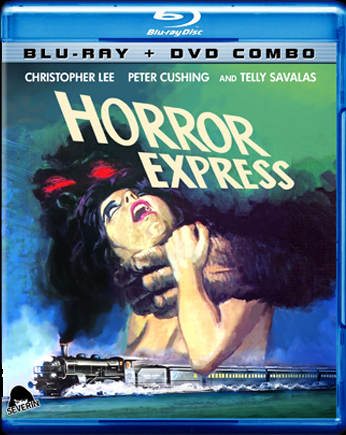 The Film– In 1906, Professor Alexander Saxton (the legendary Christopher Lee) finds a fossilized man-ape in a Manchurian ice cave. Hoping this discovery will be the missing link in evolution, he decides to bring the frozen creature back for study. Having to board a Trans-Siberian express from Shanghai to Moscow, then to London, Saxton locks his find in a crate and heads to the station.

While waiting for the train, Saxton meets his co-worker and semi-rival, Doctor Wells (equally legendary Peter Cushing). While the two discuss the mysterious crate Saxton is loading on the train, a petty Chinese thief picks the lock and takes a peek inside. After a scream pierces the air, the police find the thief lying next to the crate dead, his eyes solid white.

The police are baffled at what caused the bizarre death, but Father Pujardov, a monk traveling as the spiritual guardian of a Polish Count and Countess, thinks whatever’s in the crate is Satanic. An annoyed Saxton disregards the claim and loads his cargo while the Father looks on all coke-eyed and mumbling. Geeze, I wonder if this monk will end up being a villain in the near future?

On the train, Dr. Wells asks the luggage attendant to snoop into the crate and see what’s inside. As everyone gets settled in (ironically Wells and Saxton both have to share the same compartment, along with a mysterious woman), the cargo guy begins to take apart the crate. As soon as a plank has been removed, a glowing red eye stares back at him, causing his eyes to glaze and bleed just like the thief’s. The attendant dies, and the creature picks the lock and escapes onto the train.

The police find the baggage boy’s corpse in the crate, and immediately hold Saxton to blame. He’s forced to stay in his room under guard, but the creature strikes again. Another white eyed corpse pops up, this time a policeman, and the Inspector asks Wells to do an autopsy. After cutting into the skull, Wells notices the man’s brain is complete void of any wrinkles. Somehow all his knowledge has simply disappeared. The Inspector releases Saxton, and the three begin to discuss how to bring the creature down.

Well it turns out the mysterious woman sharing quarters with the doctor and professor is a world famous spy, onboard to retrieve a revolutionary steel ingot designed by the Count. While breaking into the safe, she is attacked by the ape-man and brain-zapped by its gaze. The Inspector manages to put down the creature, and Saxton and Wells dissect it to see how it kills.

Turns out, the fossil wasn’t the real threat. An invisible, shapeless alien being has possessed the carcass, absorbing people’s memories through their eyes- hence the blank brains found in the victims. The two figure out from images extracted out of the eye fluid (fucking REALLY?!) that the being is millions of years old… and capable of body snatching.

When more corpses begin to pile up, the doctor and professor realize the being is in possession of a new host. Armed with the knowledge of a thief, a cop, and a master of espionage, the alien thing begins its hunt for additional knowledge. And it’s pissed.

I have no clue where to start with this one. Horror Express feels like a really cheap Hammer rip-off of The Thing from Another World, but that’s just the beginning. It’s an entertainingly counterproductive mess that teeters from brilliance to brain dripping stupidity, but never stops being fun for a second. I guess we’ll start with the ridiculous things first, because pretty much everything good builds off those moments.

The first thing that’s going to slap you across the face is the look of the creature, and it’s hilarious. Ever wondered what the Incredible Melting Man would look like if he somehow merged with The Grinch? Now, after that uneasy mental image sinks in how about you give him an eye from the T-800 just for good measure. Sounds ridiculous, you say? Well that’s exactly what it is!

As I mentioned earlier, this fossilized creature is just a shell to the real alien monster. It’s an invisible sentient mass of energy that can absorb your thoughts by looking into your eyes, and transfer from one person to the other in mere seconds. And yet this being decides to stay in the body of a rotting man-ape for countless hours? Well, that’s not inconspicuous in the fucking least, now is it?

And when it finally does pick a new host, somehow the new body grows the ape fur on its hand. Why? Fucking why? I mean that’s much, much more convenient than being a fossil, but at the same time defeats the logic (what little bit there is) already set-up in the film.

Come to think of it, this intellectual being from another planet is pretty, um, dumb. Like when he’s in possession of his second host and begins asking questions about space travel. That’s about as obvious as walking into a house wearing a ski mask and asking someone “does this rag smell like chloroform to you?” Yet somehow no one catches on. God these guys are dense.

Now with all these murders and creatures and shit of the such, you’re probably wondering how the effects look. Well actually not too bad, with the exception of the glowing red eyes. While the brain-zapped white eyes look unexpectedly creepy, the red eyes of the creature are just laughable. It looks like someone used latex to sculpt two noses from a Rudolph costume on someone’s face. When I saw the creature’s glowing gaze for the first time, I half expected “Objective: Terminate Sarah Connor” to appear on the screen.

Speaking of the eye, Horror Express has the single most amazing moment of ingenious stupidity I’ve ever experienced. Literally, in the eye fluid of this creature are stored images of everything it has seen. Oh, but it only gets better, because this bastard was on earth during prehistoric times. Cushing and Lee see images of prehistoric earth and dinosaurs in the fluid, and I swear they had to have been taken from some textbook, because they’re black and white drawings. I’m amazed there wasn’t a cute little Fig. 1 note under the picture of a brontosaurs.

Now, this film is smarter than it appears, and actually made me feel dumb twice… The first was when the creature picked the lock to escape. I was thinking “right, fucking right. Two million years ago lock picks existed and this bastard knows exactly what he’s doing”. But then it’s revealed that it can absorb memories, and boy, did I feel stupid.

The second time was during the autopsy, when I first saw the wrinkleless brain. I exclaimed “because that’s what a brain looks like, right! Fucking swell.” Then it explained the whole memory sucking bit, and again I felt like an incompetent idiot. I can’t believe I let goddamn Horror Express one-up me… Twice…

It’s interesting to know that the film was produced by Bernard Gordon, the famous Golden Age writer who was blacklisted from Hollywood during the good ol’ McCarthy era. Gordon was forced out of Hollywood for not wanting to be a gutless snitch (cough Regan cough), and ended up landing a production gig in Spain where he began work on Horror Express. Why am I mentioning this, you ask? Because after about an hour through the film POOF- Russians outta fucking nowhere.

I mean there were slight McCarthy-esque things through the entire film (like being nervous as to who the alien has possessed), but this just comes out of left field, serving no purpose other than a huge middle finger to those blacklisting bastards back in the states. Oh, and it also provides kill fodder so the soldiers can come back as zombies. Soviet zombies. I don’t even know what to say anymore.

While this movie has so much entertaining stupidity going for it, there is actually one element that’s genuinely awesome. Cushing and Lee are brilliant together, with Cushing playing a mousy brainiac (unfortunately stricken with the grief of his wife’s passing, who had died right before filming began) and Lee as his almost typical sarcastic self. The two play off each other fantastically, and while this isn’t the only film with the two paired up (or the worst, for that matter), it’s sure as hell full of that British horror charisma.

Horror Express is an odd little sci-fi horror mash-up that’s cheesy as all hell, but at the same time tons of fun. Not only will you like it for all the wrong reasons, you’ll also be impressed at some of the clever elements included. The lack of consistency, surprisingly intelligent moments, schlocky effects, creepy imagery, and a sudden emergence of the walking dead, not to mention Lee and Cushing, makes Horror Express one hell of a entertaining train wreck. Wow… that last comment made me feel like Joel Siegel a little bit…

The Package– As with most films with a little age on them, Horror Express has some heavy print damage throughout- but the constant picture quality is fantastic. With the exception of a few dark scenes, everything looks great. Colors pop, the picture looks crisp, and the moderate level of noise makes Horror Express look great on Blu-Ray.

Severin has included two 2.0 tracks, a Dolby Digital Mono, and Dolby Stereo. I watched the film with the Mono track, and it sounded just fine. Volume levels are good, and the track is distortion free. I would have preferred a 5.1 track as well, but this audio quality more than compensates.

The design of the Blu-Ray is the only place the disk fumbles, but it’s a big fumble. When I talk about the Blu-Ray section, it’s basically for design and functionality. Let’s face it, if you’re watching films like Horror Express on BD, then you’re not really expecting that overhyped Blu-Ray picture and audio quality. This rating is assigned more for the construction of the disk, like pop-up menus, navigation while the film is playing, ect. For some reason, this disk has none of those features. By none means am I running around crying “oh God, the pop-up menu! The POP-UP MENU!!!”, but I don’t really see a point in not harnessing some of the basic functions of BD technology. This is not a reason to question picking up the disk, I just feel this is essentially a really pretty DVD.

First off on the extras, we get an introduction by Fangoria’s Chris Alexander, which is fantastic- although I recommend watching it after the film (it works better as a reflection than an introduction). Then there’s an interview with director Eugenio Martin, as well as producer Bernard Gordon who goes more in-depth about dealing with the McCarthy era of Hollywood. Another interview, this one from 1973 with Cushing, that plays as a semi-commentary track, and finally an interview with composer John Cacavas. Also included is the trailer for Horror Express and some other Severin titles. Fantastic work.