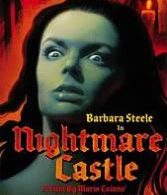 FILM– 60’s horror goddess Barbara Steele (the female Vincent Price) stars as Muriel, the cheating wife of demented scientist Stephen Arrowsmith. Her husband figures out what (or who, actually) she’s doing, and like the crazy scientist he is, decides to get bloody revenge. Now, the normal adultery revenge is a pricey divorce and subpoena- but the mad scientist approach is just torture them to death in your castle-basement-laboratory. With Muriel and her lover out of the way, Stephen realizes her fortune will go to Jenny, her sister (also played by Steele). Since he is a by-the-books insane scientist, he finds and marries Jenny- hoping to re-claim the inheritance he lost. The bad thing for Stephen is, Jenny isn’t exactly mentally stable. In fact, she’s pretty much a paranoid nut job. His plans for the riches of his ex wife are cut short by Jenny’s insane antics, but when a familiar (half) face shows up for revenge, Jenny’s money is the least of his worries!

The European horror films of the 60’s were so amazing and brutal. Some of the tortures Steven does to Muriel and her lover are very demented (one particular scene involving acid comes to mind). I guess people just assume the Gothic horrors before Technicolor were dull, because they never seem to get the recognition they still deserve. My only explanation for this is that people don’t like black and white anymore, which is a total shame. In an age of Blu-Ray and HD, the lack of color means less appeal to films, mainly in younger viewers. Truth is, these films would have looked goofy in color (ala the H G Lewis Blood Films), and the amazing cinematography and brutality would be tarnished by bad, cheap looking colorization. If you can’t appreciate this type of film, steer clear, because it’ll bore you to death. I personally love black and white, not just horror movies, but anything that makes the shadows and highlights pop out. Not all black and white looks good, but this Gothic horror-show is nothing short of creepy- thanks to the dark cinematography and bat nuts performances by Steele. 8/10

PICTURE/ AUDIO– The quality is really outstanding. Most people think it’s easy to transfer B&W movies, but it’s actually very hard. One of the worst things to show damage or pixelation is a dark scene- but there’s no pixelation on this film, and the contrast and brightness are perfect. It does show some age spots here and there, but nothing major. One scene that impressed me was a close up of a fire, because you could tell the different levels of heat in the fire by how bight the white level was. Super, super work. 9/10

Same as 70’s movies, Gothic horror flicks had a distinctive audio to them. This charm is captured and sounds great. The dubbing is kind of goofy in some places (which pretty much is the norm for a movie like this), but other than that, this audio mix sounds great. 8/10

EXTRAS– We get a interview with Barbara Steele where she talks about her acting career (and she’s kind of harsh, actually), the featurette Black White and Red, an interview with director Mario Cainao, and the US and UK trailers. 8/10