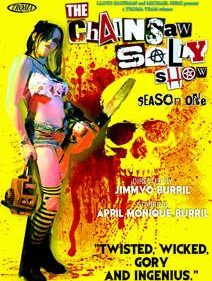 The Film– Sally Diamon and her brother Ruby (who acts like he drank Drain-O as a kid) live in Porterville, a quite Maryland town. Sally works at the local library, and Ruby is the stay at home cook. Things really get interesting when Sally gets off work, because she is the most notorious killer in American history. Drawing inspiration from horror films, she slaughters any and everyone she deems corrupt.

After killing the library staff for the ability to work there, she is greeted by an oddball high school girl, Poe. She’s the target of constant bullying because she dresses and acts different, and begins to bond with Sally over their mutual love for horror films.

After dealing with Poe’s tormentors, Sally begins to notice a man wearing a cowboy hat has been stalking her. She and her brother decide the man is up to no good, and set out to ensure he never figures out who they are. What they don’t realize is that the "cowboy", as they call him, knows much more than they think…

One thing very unfair about reviewing a series is that you can’t really talk about the plot, because each episode builds on the other and even one slip could ruin a multiple episode arc. So, instead I have to give my opinion on the series, which in this case, isn’t too good.

So let’s start with the title, Chainsaw Sally. You would expect a woman named Sally to be killing people with a chainsaw, right? Partially, but most murders are done with random things like a skill saw, guillotine, and there’s even a part where a woman’s spine is ripped from her asshole.

Now this may sound fun, and it is, but it all feels REALLY half assed. Nothing looks convening in the slightest, and it makes the killings feel bland. In fact, the most anticipated killing in the movie uses CGI blood, yet there’s no digital effects anywhere else in the series. I know this is not to be taken seriously, but in many ways it seems like they just wanted to get the damn thing over with.

So now that the main selling point of the movie has been discussed, here’s the second staple of Troma- tits. Well, there’s not many. This isn’t really something that takes the series down, but I just found it humorous that Troma wouldn’t have a mandated gratuitous amount of nudity.

Well, if there’s not much nudity and the kills are lacking, what’s left? Talking, lots and lots of talking. The characters are fairly dull aside from Sally, so listening to a mysterious investigator and the neighborhood gossip queen discussing the possibility of a killer in the town sounds about as enthralling as it really is.

The final thing that annoyed me, and this was easily the biggest, was that every episode opened with the same fucking credits that last over four minutes. I do not want to experience the credits to any T.V. show, much less one almost a fourth of the episodes total run time, eleven times in a row. It felt like filler, and honestly, quite a bit of this series does. It’s entertaining, but it’s still filler.

I really had high hopes for this series. I’ve never seen the movie, but with a title Chainsaw Sally, I wanted something over the top and bat shit insane, not two girls arguing about who the best slasher killer is. It’s not that it’s a bad show, it just had the potential to be much better than it is. In all honesty, it feels like it’s being marketed to the Hot Topic crowd.

The total run time hits around 200 minutes, and I’d say about a fourth of that is either filler or pointless dialog. I feel like this series has tremendous potential, and until the kinks are worked out, it really won’t materialize. A decent but lacking first effort at making a horror-comedy series.

The Package– I’m assuming this was filmed on mid grade digital cameras, because it looks kinda cheap. The dark scenes are pixelated as hell, and the light scenes almost glow with brightness. The saving grace is that quite a bit of the story takes place in Sally and Ruby’s house, which is a really cool set filled with tons of horror memorabilia. It’s not too light or dark in there, and what’s going on is usually funny or gross.

The audio is awful. It’s flat, monotone, and the effects are overpowering. The worst thing is the scenes filmed in the library. I assume this building was architecturally designed to rape the human voice, because half the time it sounds like two people are speaking the same line. The audio literally breaks in half during most of these scenes. If it wasn’t so distracting it would be easily overlooked technical problems, but it just happens way to much.

Every episode has a laugh track that you can toggle (with random laughter that reminds me of Lynch’s series Rabbits), and about eight or so have commentaries. Disk one contains: 21 weeks in Porterville- a making of featurette, Anatomy of a Kill- a behind the scenes look at the murder of a couple in the woods, Sexy Slideshow- this one should be obvious, a music video for the theme song (which you’ll have heard during every credit sequence), and Can you Hear Me Now?, a short film showing how Sally deals with bad cellphone educate. The second disk has the the standard "Tromatic Extras" including trailers for their releases and the T&A of the Week. These extras are very fun to watch and show some pretty entertaining behind the scenes hi jinx.