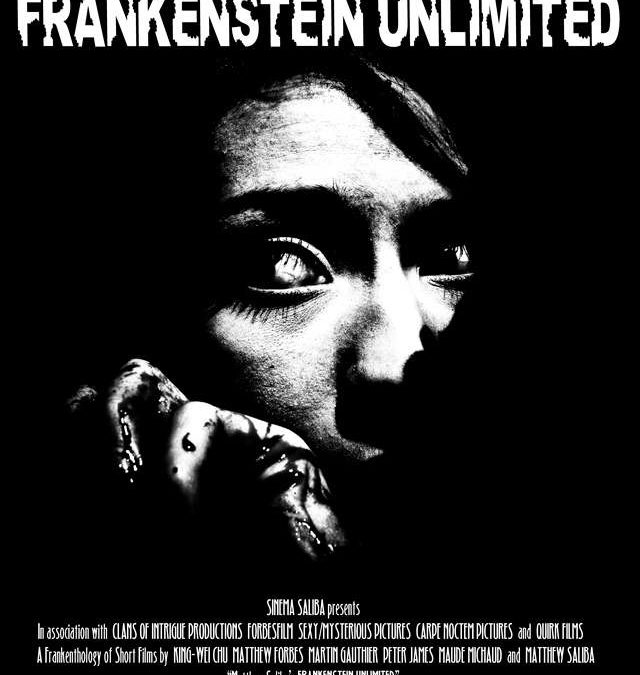 I have been waiting a while for Frankenstein Unlimited- a project headed by Matthew Saliba, involving five other Indie directors from Montreal. Each director in this anthology used Mary Shelly’s Frankenstein novel as inspiration to create their own short film. The result vary greatly in content, but in quality it far surpassed my expectations!

The Film(s)– Frankenstein Unlimited is broken down individually by each film.

I fell in love with the films of Matthew Saliba when I saw Vampyros Lesbos and She Was Asking For It, however the main thing I loved was the artistic shots that looked like they came from a Giallo lobbycard. Dark Lotus uses the same technique of still image (masterfully I might add, with no portrait shots, this one is all in landscapes), but is Black and White. My first thought was "how will this B&W look from a man who uses colors so greatly"? Well, what Matthew Saliba is to color, Matthew Saliba is to Black and White- fantastic. The shadows and highlights worked perfectly! One thing I was super impressed by, Saliba did something in 13 minutes that Tarantino takes 3 hours to do. Pay homage to exploitation films in artistic ways! There’s obvious references to The Beyond (my favorite horror movie, so of course I was gushing over that) and Diabolical Doctor Z, and believe it or not, these scenes fit perfectly with the Frankenstein story. Couple all these beautiful images with a complex but fitting soundtrack, and Dark Lotus has to be one of my favorite shorts in a long time.

Matthew Forbes "Victor"– This modern day telling begins with the reanimated corpse running through the snowy woods, perused by an angry mob. In fear, he commits suicide. He was the creation of the respected, elderly Dr. Victor Frankenstein. Now, the town hates Victor, and avoid him at all costs. A drunken bum warns him of the local unrest, and he is stalked by a mysterious harmonica-playing stranger. Victor takes refuge in a coffee shop, and when he is shunned by everyone in the building, Victor realizes and accepts his fate.

This is without a doubt the deepest short on the disk, and required several viewings to truly grasp. I love the modern setting, because this story is full of social commentary. If Dr. Frankenstein lived in our time, would we sacrifice our lives and rot in jail for killing him? Of course not, we would shun him like middle school students, and that’s where this film draws it’s power. Add in just enough mystery and supernatural events to make Victor a very interesting modern take on the classic story which shows humans for the monsters they truly are.

King-Wei Chu’s "Flesh for Kung Fu"– Martial Arts masters all over the world have been killed, their body parts severed and missing. Two remain, one an honorable fighter (Gordon Liu from Kill Bill), and one made from parts of honorable fighters. A challenge is set- a high noon fight on the rooftops of Hong Kong. Will good triumph over "self betterment", or will the master just become more flesh?

You must admit, that is one hell of a title. I love Warhol’s Flesh for Frankenstein, so I wondered how Kung Fu would mix with the story. The results are seamless (pun highly intended), and create a very interesting take on the subject. Not only do we have amazingly complex fights, but they’re between two Cantonese fighters over the skyline of Hong Kong. That’s alot happening at once, but it works. It’s like butter and toast, it just works. The fights have amazing chirography (after all, Gordon jumped off a sword in Kill Bill, so don’t lower your expectation here people), and the fast paced nature and style adds to the flair. Also, this film has a very fitting and moralistic ending which was the perfect payoff to this story.

Maude Michaud’s "Reflection"– Anna was picked on as a young girl due to her facial deformities, and ran off to join a burlesque troupe. She was the janitor for them, and all the dancers befriended her. After saving her money, she decides to get plastic surgery, making her look beautiful. However, her ugly nature has sunk from the skin down into the soul, and Anna treats the dancers horribly now. Her beauty has made her the desire of everyone, but she manipulates them in ways fashionable to her. After putting up with her cruelty, the dancers put on a show… just for her.

The moral of "beauty is only skin deep" has been told millions of time. When this short started I thought "oh, this again…", but I was wrong. Way wrong. Because instead of the corrupt character slowly noticing her flaws, in this story she is forced to see them. In the final dance performance by the troupe, each performer has been mutilated in some way (wrapped in barbed wire, ect.). This was a very creative and imaginative way to show the old wise tale. One thing that I couldn’t catch was a good Frankenstein vibe. I understand how it can fit with the source material, but for me it just wasn’t enough. Still, this is a creative way to show a fable that does pull some of Mary Shelly’s references.

Peter James "Occam’s Razor"– Occam’s Razor is a saying that when broken down means "the simplest answer is usually right". Two detectives each have a murder in their interrogation rooms, one male and one female. The duo both claim to be responsible for the same three murders- the children of two judicial officers and a low life street bum. They refuse to elaborate on the first two, but say they killed the street bum because he sold them black market organs. Organs that belonged to Victor Shelly, a serial killer executed a few years ago. They give the two detectives a cryptic clue, "Occam’s Razor", and they tell them Victor says hello.

This short is fantastic. It’s the longest of all six, so I was hoping it didn’t drag on. It didn’t, and in fact, I would have loved to see more of it. One detective is calm and cool, and the other is vulgar and violent. The killers are both care-free, and know for a fact they have the upper hand. I love how this was shot in Black and White for the present time, and color for the flashbacks. This worked amazingly well, because the black and white interrogation rooms, followed by the colorful crime scenes (like the woods and a parking garage basement) made each setting seem intense and eye catching. Of course you know this has to have a twist, and all I can say is that I did not see it coming at all. Occam’s Razor is a very imaginative crime driven adaptation of Frankenstein, and I love it.

Martin Gauthier "Mr. Fluffenstein"– Alice has just lost her cat Mr. Fluffy in a terrible washing machine accident. After his funeral, she digs up his corpse, bleaches it (figure that one out on your own), and reanimates it. Her parents are not too happy, but Alice is no longer sad, so they see no harm in it. A few days later, the neighbors cats, Muffins and Sugarpuff, turn up missing, and Alice’s parents might no be so happy about Mr. Fluffenstein anymore…

I laughed my ass off during this short. It’s the only comedy on the disk, and the placement at the end of the collection was a brilliant decision. If you laughed before Victor or Occam’s Razor, the mood would have been ruined. However, laughing before the end credits ruins nothing, but actually enhances the anthology. The anamatronic cat is really cool looking, and seeing Alice build it is great. Seeing an 8 year old use a blowtorch on metal and cat flesh is just funny, no question about it. The dialog and over the top antics of the characters (cat included) are hysterical, and really make this short stand out as one of the funniest Frankenstein knock-offs I have ever seen.

Overall– It was ballsy to mix Frankenstein with Kung Fu, robotic cats, and bondage- but it fit perfectly. The order of each short was really nice, and one didn’t seem to overpower the other (possibly a little with Victor, but like I said you need to watch that one at least twice). Overall this is a nice collection, relying on Frankenstein but not leeching off it. You don’t have to be a Universal Monsters fan to enjoy this.

The Package– In the past, I broke this down by film as well. There’s no point in doing that here, because each short looks really good. The color and B&W (epically the B&W) look fantastic, and the picture quality will not disappoint. I think one scene in the entire collection looked pixelated, and it was a super dark shot. It has some small rough spots here and there, but overall it’s a very professional and sharp looking picture.

The audio is nice, but slightly flawed. I expected some volume shift between each film, but it’s pretty noticeable here. Aside from that I had no problem during the films, I just had to fiddle with the volume at the start of each. Like I said, slightly flawed. Nothing bad, just kind of annoying at times.

Yes, this has some extras! One really cool feature on the disk is the ability to choose your own Title Menu background (based on each short). That is the most "Blu-Ray inspired" feature I have ever seen on a DVD. As far as actual extras, it comes with a commentary by each director for their short. These are a must, and really show what makes the Montreal underground tick.