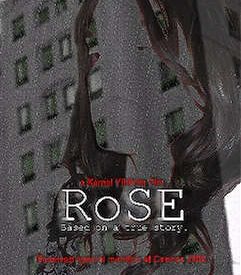 FILM– Rose is hopelessly addicted to crack. Her best friend has tries to help her, but not wanting to bring her into the mess, she refuses her offers. Tony, her boyfriend, just so happens to be friends with her dealer, Blondie, and his goons. Well since Rose can’t make her payments (and her boyfriend is too busy kissing ass to help her out), slapping her around for a few days isn’t fun anymore, so Blondie decides to take an "instant payment"…

Reaching her breaking point, Rose’s mind begins to falter, and after settling the score with another customer who was also trying to rip him off (Jason Impey FTW), Blondie returns to collect once again; however, this time Rose has a few people willing to help her fight back.

I really enjoy these British independent films. They’re a quick, entertaining watch that deliver on the goods. Rose has it all- rape, drug dealers, blunt force trauma, and gunfights, all within a 25 minute run time. The story is rapid, just like it should be. The acting is great, and the camera work is impressive to say the least.

The only negative thing is some of the post production effects are kinds goofy looking, but that’s due to budgetary issues and making a fuss over them would make less sense than punching an infant for being rude. In short, if a drama with exploitation elements sounds interesting to you, then this will be your cup of tea. 8/10

The second film on the disk is fLicker, a 4 minute experimental short. I’ve seen probably close to 50 films like this, and this one can hold it’s own in the pack. It’s just a woman locked in a room, playing with various dangerous objects, with images being projected on her.

There’s a heavy coat of static through the film, which I really enjoyed. Most retro film makers add grit and grain as effects, but static was an interesting decision that paid off. It looks like a transmission from Videodrome, and the violent feelings it emits does nothing but strengthen that association. 8/10

These are the first of many reviews I will be writing for the films of Kemal Yildirim, and so far I’m really digging what he does. These films were sent to me on screener disks, so there won’t be any picture, audio, or extras ratings (although the disk did come with a making of for each film, which were just as entertaining).