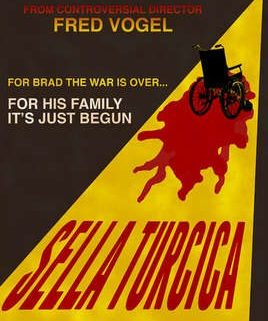 The Film– Sgt. Brad Roback is finally coming home. After his squad went missing in Iraq (as he says, no blood, no bodies, just empty vehicles and unfired guns), Brad was thought to be dead. Turns out he’s alive, but he’s a little different now…

The Roback family are waiting for Brad to arrive, epically his sister, Ashely. The only person who isn’t thankful for the Sergent’s homecoming is her boyfriend Gavyn, douchebag extraordinaire. He thinks Ash should just completely ignore the fact that her bothers isn’t in a body bag, and go with him to a rave he plans to DJ. Since he can’t take no for an answer, he just mopes around the house waiting for her to change her mind.

When Brad arrives, he’s pale, his eyes are sunken in, and he’s in a wheelchair. Everyone seems to notice his social withdrawal, but every time Gavyn talks, he tries his hardest to antagonize Brad. After a few violent outbursts, the family sit down for dinner. Everything Brad puts in his mouth repulses him, and he says it tastes like mud (even though he says he’s starving). He starts talking to the family about his tour overseas, and after DJ Dipshit says the wrong thing yet again, he leaves the table and heads to his room. While trying to sleep, he notices a black fluid leaking from almost every orifice in his body, and shrill sounds give him a piercing headache.

During the night, Brad’s health worsens, and he is almost catatonic by the next morning. While the effects of his condition begin to take a toll on his family, Gavyn stops back by to try yet again to convince Ashley to tag along with him. Unluckily for everyone in the house, whatever been wrong with Brad finally reaches full force, and he begins a to satisfy his inhuman hunger…

Toe Tag has been a company I’ve followed since I first heard about them. I think I was round 15 when I first saw the August Underground films, and have been a TTP fan ever since. Well, here’s Sella Turcica (which is a little bone at the base of your skull, keep that in mind), and after all is said and done, this is a completely different type of film for Toe Tag. Instead of the bat shit insanity of their previous ventures, this film relies almost entirely on tension.

For the first hour and twenty or so minutes, the only thing horror-ish is Brad’s illness. No blood, no violence. Everything plays out like a family drama, from the mental stress of having your son come back in a wheelchair (Camille Keaton NAILS this roll), to the racial tension played out with by the sister’s mooching boyfriend. It has this typical "All American" family feel to it, and the things that upset the flow of family life cracks all the way down to foundation. And the best thing is, it’s not fictional. These problems still continue all across this "glorious nation" of ours. It’s odd to see a film that could be full of political undertones (like Homecoming and Deathdream), but instead it opts out for social commentary. That’s a tricky thing to do, but damn they pull it off.

Now, that’s not to say Sella Turcica is a Lifetime Movie in the least. Anytime Brad’s on screen, there’s this unnatural, almost Lynch vibe that oozes out. The surreal vibes this film puts out are really odd, because Brad isn’t the only character who emits them. His brother is a tattoo artist (played by real life artist Sean McCarthy) who’s covered in ink and piercings, and his totally normal looking cousin has a Pug named Fulci. It’s hard to really figure out how these people fit into this white picket fence family, and it also feeds the surrealistic nature of everything.

The acting is for the most part good, but some characters overshadow everyone else. Harvey Daniels completely owns his role as Gavyn. You can tell his character was written to be killed off, and you wait and wait. I mean, the second thing he asks Brad is how many people he killed (after giving him a copy of his mixtape as a welcome home present), how can you expect this character to not be slaughtered? Camille Keaton plays the mom perfectly, and Damien Maruscak pulls off Brad like second nature, epically in the last half when he goes homicidal. He’s able to stare totally emotionless, convulse and jerk in sickening ways, and portray a man suffering a hundred different types of pain. The other actors aren’t bad, but when these guys are on screen with other characters, they just steal the show.

Finally, the gore. Toe Tag is infamous for showing the sickest shit out there, so how do you compensate for 90% of your film being a psychological thriller? You make the last 10 minutes of the film punch you in the goddamn face, that’s how. What’s genius is there’s no new characters added, so the people you’ve gotten to know for the past hour are the ones being torn to shreds. I really can’t say anything about the last section of the film, and that sucks so bad because it’s fucking amazing. When all hell breaks loose a few minutes before the credits, saying anything would totally ruin it. Just trust me, there’s a moment, and you’ll know it, when things are about to get nasty, so hold on tight.

In front of the camera, Fred Vogel is a monster, and behind it he’s a psychopath. The difference is monsters play on our fears, and psychopaths wreck our comfort. It’s amazing to see Toe Tag go from August Underground to social terror, but they did it marvelously. Sure there’s some flaws (Brad’s make-up looks a little too fake in some places, audio sync problems), but these are trivial. You don’t watch a film where a guy oozes black shit from his head for realism, and if you wanted a polished production you’d be in the theaters watching something. TTP thrives on the independence, and this film was made for their audience. While the plot might seem generic, the execution sure as hell is the furthest from it, and the ending just grab you by the throat. In all honesty I figured out Brad’s "problem" before it was revealed, but the violence he unleashes in his house was something I never envisioned. For everyone who says TTP only relies on gore and shock value, shut the fuck up and watch this.

The Package– The camera used is really, really good. There’s only one really dark scene that shows any form of noise- everything else is flawless. One thing about the picture is it’s really bright. White seems to just be shooting out of everything. It gives the movie this "no shadows in this house" feel, which can’t be further from the truth. Good cameras with great camerawork make this a very good looking film, even for non independent standards.

The audio is good too. Nice volume, clear dialog, and a non overpowering soundtrack. Speaking of the soundtrack, it’s really the only thing I disliked about the film. The last few minutes has a hyper, unnerving score that works, but everything else just sounds too military. I get what they were trying to do, and it makes sense, but I just found it overbearing in places.

Toe Tag has included some deleted scenes ( FYI, don’t expect any gore in these), behind the scenes photos, outtakes, on set stills, a commentary track, and two featurettes. The first one shows behind the scenes of the dog’s death, and the second is about tattoos various TTP crew members got during the filming. But, in my opinion, the coolest thing in the extras is the trailers. It has the trailer for the film, but also gives us a first look at MC v. 2, the AU boxset, and the documentary Latex Autopsy. Skimping on nothing, Toe Tag has released yet another kick ass disk.