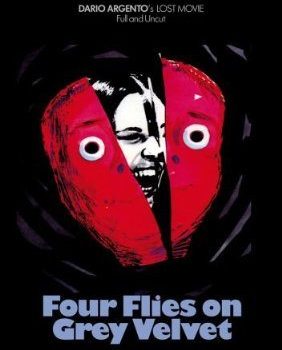 The Film– While walking home from a jam session with his band, Roberto realizes he is being followed. Not only has the man followed him for the past few blocks, but he’s been stalking him for days now. In an attempt to escape the man, he dives into an abandoned theater, only to still be followed. Roberto finally has enough, and confronts the man, who turns hostel and pulls a knife. While defending himself, Roberto accidentally stabs the stalker, killing him. All this was watched from an opera box by a masked photographer who snapped some pretty incriminating photos.

The next day, Roberto receives the dead man’s ID in the mail. During a party with the band members and some friends, he finds some more evidence scattered around his flat. That night, he is visited by the masked stranger from the theater, who threatens Roberto before knocking him out and fleeing. When his wife, Nina, finds him, he explains the events that led to the break in. The next day, Nina’s cousin arrives in town to stay with the couple. Adding to the frantic nature of the situation, their maid decides to play amateur sleuth and finds herself in the killer’s sights. After some more threats (and at Roberto’s request), Nina leaves for her own safety. Roberto hires a private investigator, and uses his friends to help look for the psycho. After the killer strikes close to Roberto, the coroner tells him the victim’s last image was burned into her retina. It looks like four flies hovering near gray velvet. With this the only clue, and Roberto’s time running out, can his friends help catch the killer before it’s too late?

Dario Argento is my favorite director of all time. He’s a true master, and is one of the most influential film makers ever. I picked this movie up on a German release a few years back, and never finished it. Not because the movie was bad (actually, it’s one of his best straight out thrillers), but the transfer was unwatchable. I sat and waited for this to get a nice DVD, but it never came. Early this year, I heard a company was going to release it on American soil. I was thrilled, and automatically assumed it was someone like Blue Underground or Anchor Bay. When I heard the name Mya Communications pop up, I was really confused, because a Google search later and I still had no info on that company. Four Flies was their first release, and probably one of the most anticipated releases of the past few years. Mya came out swinging, and got a KO.

Enough about the back story, you want to know what I think. Well, the Giallo is my favorite sub-genre, so I have devoured many. This one was shot in ’71, and has none of the cheesy depravity of the later entities. It’s a very mature thriller, with more twists ans turns than a roller coaster. It won’t entertain people who are only fans of "trashy" Giallo like New York Ripper, but if you enjoy the later Argento like Deep Red, you’ll like this. I don’t want to say too much about the film, but it’s decently bloody. One victim is bludgeoned, and the effect is pretty unique. Another thing on the effects, the image of the "four flies" looks brilliant. In fact, Argento said if the effect had come off looking bad, he would have never filmed the movie.

Like I said, I don’t want to spoil this, so I know I’m being vague. I do like it better than Cat o’ Nine Tails, but I feel Bird With the Crystal Plumage is the best of the "Animals" films. On a final note, the killer’s mask is incredible. It looks like hard plaster or fiberglass, and is pretty creepy in a comical way. Also, it reminds me of John McCain for some reason, which is always good for a laugh. Bottom line, die hard Argento fans will already have this- but if you want to see an early Giallo with a more serious tone, this is your movie.

The Package– With the sole reason I never finished the film (before this DVD) being the transfer, I had low expectations for the quality of this one. When I saw how beautiful Mya made this film, I was blown away. Maybe I’m gushing because I sat through 30 minutes of gritty, grainy Hell- aka the German disk. Really, there’s barely any damage, and the colors and flesh tones are spot on. Like I said, I’m over excited by this transfer because I have something to compare it to, but seeing the effort Mya took to make this look so good, I can’t help but give the company its due.

The audio sounds fantastic, and is very strong. No cracks or hisses, and good volume. I didn’t notice any fading, but some characters do talk at a lower volume than others. The dub isn’t too bad, but there’s some unintentionally bad dialog strewn in there. Not as bad as, let say, Pieces, but it’s there.

For such a rarity of a film, Mya has assembled some very impressive extras. First we get some trailers: the Italian, American, and the American teaser. The audio and picture have been restored on each trailer, and they look and sound fantastic! This is the only release I can think of (so far) that has remastered the trailers as well as the film! Also included: the English opening and closing credits, and a slideshow of posters and photos.