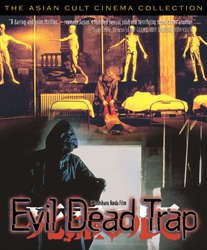 The Film– Nami, a late night T.V. show host (blandly called "Late Late Nnight") has been running a little program recently. She asks her viewers to send in home videos of themselves, and up until now, none have been worth a damn. When she finds a VHS in an unstamped package on her desk, she hopes this could be the tape that will bring her show back to the top.

The tape shows a dirt road that lead to an abandoned factory. The video-taper walks inside, and begins to film a bound woman. After cutting at her clothes for a while, he starts slicing her legs and chest up, eventually sinking the knife into here eye. Horrified and intrigued, Nami clearly realizes this tape is an invitation to the factory, regardless of how legitimate the murder was.

Nami round up the Late Late Night crew, and they head out the following day to find the factory and see if the murder was real or a fake. While playing amateur snuff hunters, they find the factory, and head inside. Of course the dusty, possible residence of a killer seems like the perfect local for a quickie, so the only male of the group and his interest sneak off. After the camera girl gets nailed, the killer decides he’s going to do the same- unfortunately in in a more literal sense…

Some more exploring reveals a suit wearing drifter who cryptically warns the girls about being there. The killer decides to make himself known, and exposes the corpse of the camera girl in spectacular fashion. To make things worse, the killer had been keeping the snuff victim’s boyfriend as a prisoner. He escapes, and does what any logical man would- starts raping a tech girl in the news van (while carrying on a conversation, no less).

A few more traps and bodies later, Nami runs into the mysterious suit man again. He tells her he is there to find his brother Hideki, who isn’t a very nice person. Nami and the stranger team up to escape the factory, but the most shocking events have yet to come.

Evil Dead Trap is a late 80’s slasher from Japan. Naturally, that means they’ve sexed the hell out of it and it’s going to be insanely gory. True and true, but it also mixes in a bizarre supernatural element. This makes for some bat shit insane murders, like the camera girl being impaled through the floor and a wall by what looks like pinch point bars.

The story is straightforward, and pretty much sets the stage for sex and violence in a fantastic location (there’s something about abandoned places that I absolutely love). Its got some campy moments, but surprisingly the atmosphere is tense and downright unnerving in places (largely due to the score, which oddly reminds me of the theme for Argento’s Phenomena).

The plot description only goes about two thirds into the movie, because the last half hour of the movie is nothing but revelation after revelation. Its got about 17 fake endings, so there’s not much I can mention after the one hour mark that won’t spoil the rest of he film. You remember in Scooby Doo when they would capture the monster and just keep pulling off one mask after the other like Russian Nesting Dolls? That’s how the last act of this movie feels…

Evil Dead Trap is not a movie founded in original ideas at all. but the film makers were able to combine enough gruesome set pieces, sex, and atmosphere to create a unique and memorable slasher. This is a slasher film, but keep in mind Japan has a way of upping the ante about ten times above American standards. Expect something demented.

The Package– The film looks much better than the original Japanese VHS release (which is pretty much a novelty since it was never released with English subs or a dub track), but it still has some issues. There’s a mild to moderate amount of static on the picture, and in super dark or light scenes it really shows up. A little soft looking, but overall nothing major. The colors are vibrant, the brightness is good, and the image free of any major damage.

The audio track is in the original Japanese language with English subs. Not much to say here- the subs are great, the track is well balanced, and mostly everything sounds clear and distortion free.

It comes with an audio commentary from the director and SPFX artist, and the trailer, which has been sourced from a VHS and has no subs. There’s also a Special Thanks section which many of the early 2000s Synapse disks had, but I don’t consider that an extra.