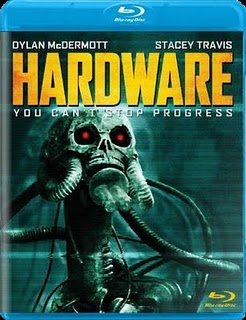 The Film– Hardware begins with a nomad wandering the vast deserts and red skies of a post nuclear America. He begins to dig around near scrap metal, and finds the robotic skeleton of… something. He puts the pieces in his satchel and heads to to the closest city to cash the scraps in. While there he meets a soldier for hire, Mo. Mo buys the head for his girlfriends Jill, who is a metal sculptor. Mo has been gone a while scavenging, and the "here a few weeks gone a few months" schedule is not making her too happy. He sells some parts of the robot, then heads to Jill’s apartment. That night, a fat bastard with an infrared camera spies on them having sex from a few apartments over. She can’t sleep, and starts putting the finishing touches on her newest sculpture. The centerpiece- the robotic skull. Meanwhile the scrap dealer calls, waking Mo up. He frantically tells Mo that he discovered the robot parts are worth lots of money. It’s all part of M.A.R.K. 13, an assassin droid that was destroyed out in the wasteland. Mo heads out to talk with the dealer, leaving Jill to finish her work. Turns out, M.A.R.K. 13 is really advanced. And really vicious. After tapping into the power supply, it rebuilds itself. This robot has multiple arms, saws, and syringes full of a killer psychoactive drug- and he’s locked in with Jill. The "Peeping-Tom" neighbor comes over when he sees Mo leave, and everything goes pretty downhill from there. By the time Mo realizes what the M.A.R.K. 13 can do, it’s already functional and stalking Jill. Can he make it back to the apartments in time to save her from the metal maniac?

I had a chance to pick this up on several German releases, but I held out. The main reason was because they were cut, and bad quality VHS transfers. I hoped and preyed this would get a good release from an American company, but I had lots of doubts. About a month after I started the site, I got an email from Severin telling me they were planning to release Hardware. I like to call that my "housewarming gift" from them. I remember seeing parts of this as a kid, but not enough to amount to anything. I really became interested in Hardware last year when my inner nerd let loose and hooked me on Fallout 3. The development team behind that game used this movie for ideas, which inspired many of the enemies, clothes, settings, and even the radio DJ (played by Iggy Pop in this flick, with Lemmy also making a fun cameo).

With a movie that gets hyped up, you set an expectation level so high that it usually can’t be topped. I had one for Hardware, but it didn’t fail to surprise me. To start, I love the set pieces. Everything looks rusted and grimy and perfect. The wasteland and it’s blood red sky are very nice looking, and grabs your attention from the first minute. This setting doesn’t last long, and we’re thrust into the industrial urban setting. Again, very nice and detailed. One thing I also loved was that Jill is a channel surfer, so anytime she turns on her TV we get all kinds of short snippets from stuff like Psychic TV: First Transmission, and music videos from Ministry and GWAR.

M.A.R.K. 13 is a pretty kick ass robot, not gonna lie. He looks like a combination between an ostrich, spider, and scorpion- only with chainsaws and infrared vision. The infrared vision doesn’t look like Predator, which I was afraid it would. It has it’s own thing going, and looks very pixelated and tech-ish. Sadly, this film has an extremely low body count, and with a robot that has THIS many weapons, it’s a shame we can’t see him use every one. Instead of making this a gore soaked slasher, Stanley really explored the cat and mouse element of being locked in a confined space with a metal killer, and it worked (but I still would have liked a little more mayhem). I like the social commentary of machines becoming stronger than man, and it’s a fear we all have to some extent (or at least acknowledge). However, instead of taking the Hollywood-driven Terminator route, these guys created something social, unique, and one of the best examples of eye candy out there.

The Package– I’m usually much harsher on Blu-Ray, because at their price, sub-standard quality is not acceptable. While the DVD looked fantastic, you never know how the Hi Def will look. I can tell you that with Hardware, it’s fantastic, and even surprised me. The DVD looked so good that I figured Severin would just use that transfer for this Blu-Ray (SO many companies do that now, and it nothing more than a damn a ripoff). They’ve completely re-built the picture, and their effort is obvious. One thing that bugs me is the noise is still pretty noticeable in some spots, and a few darker places have a drop in quality. No pixelation adds points, and this looks better than the DVD for sure. Regardless of the few problems, this is the best Hardware will ever look.

Here’s where this release kinda sags- it uses the same audio as the DVD. The 5.1 sounds good for the DVD, but I would have liked a Hi-Def audio track too. The audio is still good, I’m just a stickler for stuff like that. Hardware really needed a Hi-Def track to make this Blu-Ray stand out, because the lack of is really the only flaw with the release.

Here’s where I was really sold. Severin has learned from their mistakes on the Inglorious Bastards Blu-Ray, and the text size is almost perfect. The chapter listing font was too small, but the extras menu was what I was really worried about, and it looks nice. The computer theme to the disk (loading screens and the such) were imaginative and creative, making the wait for the disk to load pretty entertaining on its own. The inclusion of a main menu makes this a very nice disk to look at. However, they still have some work to do on the Pop Up menu. It’s not as bad as some I have seen, but it’s still pretty basic and bulky. Severin has shown progress within just 3 disks, and I think they’re on their way.

Hardware comes with: audio commentary with Richard Stanley and Norman Hill, No Flesh Shall be Spared, an hour long documentary on everything Hardware, the short film Incidents in an Expanding Universe, which is a "prequel" to Hardware, two other shorts from Stanley- Rites of Passage and Sea of Perdition, an interview where Stanley discusses the planned sequel to Hardware, deleted and extended scenes, a German trailer, and a vintage VHS-ripped Hardware promo. All the shorts are fantastic, and Incidents in an Expanding Universe reminds me of the short film version of Street Trash alot. All in all one of the most complete packages I have seen in a very, very long time.