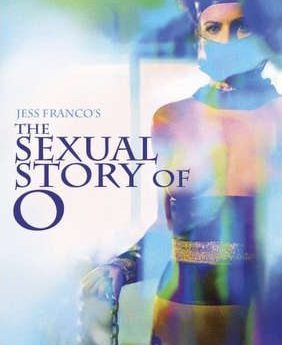 The Film- Odile is seduced very early on by her chain smoking neighbors in a sea side resort. The couple bring her, and her sex drive, over for some Ménage à trois action. After some cadoodling in the bedroom, the couple talks about their plan for O- which turns out to be selling her to the Mistress who’s been funding their lifestyle. Only problem is, they like O too much to sell her to the sex slaver, so they keep her around for a while- you know, for some more funzies.

When the couple finally decides they need the money to move on with their life, they sell O to the Mistress and her male counterpart. Once the kinky couple have parted with O, they decide they want her back. The male has fallen in love with her, and the female misses her bedroom shenanigans. But interfering with two murderous sex fiends can be dangerous…

The Sexual Story of O is a very shallow movie. That’s not a bad thing, but the plot is almost nonexistent. The not quite hardcore/ beyond softcore sex scenes last for A LONG TIME, making any further plot developments obsolete. Like I said, this is not a bad thing, because unlike most Franco sleaze flicks like Sadomania and Mansion of the Living Dead, there’s nothing else aside from the sex.

Now here’s what hurts the film- the title. Anyone with a taste for transgression will know The Story of O, which this movie is not in the least. There’s nothing involving the infamous "Ring of O", and the sado-masochism doesn’t even pop up until the last 15 minutes of the movie (and looks like it was filmed through a kaleidoscope). This doesn’t hurt the film it’s self, but the title does promise WAY more than it delivers. Aside from that, it’s a solid erotic film with "derp" moments (moaning with the actor’s mouths being shut, double barrel shotguns firing three shots without a reload, ect.). Any Franco fan will know what to expect, and that’s who The Sexual Story of O really caters to. 7/10

The Package- Severin really made this one look good. There’s a few places where the print is damaged and flickering, but overall the picture looks good. The climax (no pun intended) with the kaleidoscope effect looks very lush and cool, and I highly doubt anyone will be disappointed.

The audio is well balanced and sounds clear enough. Like I said there’s some dubbing issues, but it really makes for a humorous watch. Speaking of the dub, this is a combo of Spanish and English, so Severin included some very nice subs that run for the duration of the movie, not just the Spanish parts.

The only extra on the disk is Franco’s O, a featurette with ol’ Jess talking about his erotica. It’s always fun to see Franco talk, and this 15 minute talk with the director is a welcome addition to this disk.