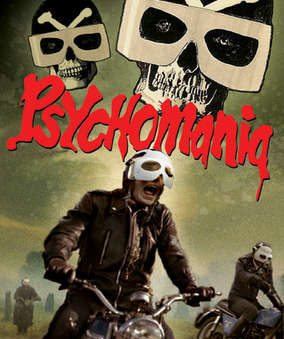 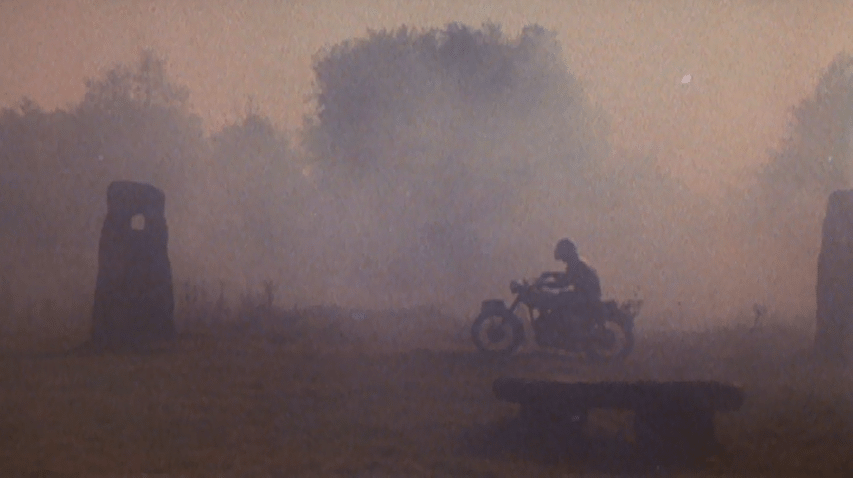 The Film– British lad Tom enjoys spending time with his friends. What makes this bad for everyone else is the face that they’re all occult bikers, who lovingly call their gang "The Living Dead". Aside from tormenting the local townsfolk, the MC likes to hang out at a place known as The Seven Witches, a graveyard that some believe is haunted. The interesting thing about the gang’s hangout is that Tom’s mother, as well as her butler, Shadwell, know for a fact it is indeed haunted.

Tom’s mother enjoys holding seances allowing loved ones to speak to their dead family members. She does this as a charity, and insists that no one ever pay her for her services. Shadwell seems to be the enforcer of this policy, evicting a family when they try to give him a jeweled cross as a gift. Aside from running the estate, Shadwell also enjoys studying frogs (which this film attributes as a satanic animal apparently). Tom’s family has influences his love for the occult, and he desires to die and live again (unlike his father, who didn’t make it back).

After Tom’s mother allows him to enter a forbidden room in the house, he overhears her talking about how you come back- you’ve got to kill yourself and believe without any doubt that you’re going to come back. With his dream in sight, the very next day Tom speeds off a bridge. His death shocks the gang, who all saw it as just a suicide. After his burial (which is easily one of the dumbest scenes in film history) at The Seven Witches, Tom rises from the grave with evil intent. That night, he murders an entire tavern.

Originally thinking someone impersonated their deceased leader, the gang soon learns of Toms round trip through death. They all follow his steps, but several botch it and end up staying under the ground. With what’s left of the gang undead (aside from Tom’s girlfriend Abby), The Living Dead live up to their name and begin to harass and murder anyone in their path. But Abby’s unwillingness to cooperate, and Tom’s mother’s guilt for creating a gang of ruthless killers, soon the bikers find out how shitty eternal life can be.

Psychomania is one of those damned films that you can’t tell if you loved it or utterly hated it. It has so much good, and so, SOOOOO much bad. So let’s start with the good- the movie has amazing cinematography. The action sequences, the foggy meetings in the graveyard, the stunts, everything is filmed perfectly. One of the best things about the camera work is that it actually creates some surprisingly creepy atmosphere (the shots of the bikers with their skull helmets circling giant stone pillars is a good example).

And here’s the bad- There’s not a single character in the film that is likable. The bikers are all total assholes, Tom’s mother and Shadwell are just whiny, the cops are idiots, and Tom is the biggest douche to grace my TV screen since I accidentally fell asleep and woke up watching Jersey Shore. The character of Tom could have been changed to Ted Bundy and he would have been one hundred times more likable (and Tom’s not even a rapist).

The plot is a mixed bag for me. I love the idea and the story, but the execution goes from being genius to plain ignorant. The worst scene in the movie is Tom’s funeral, where everyone is wearing colorful groovy clothes (as opposed to their leather biker gear), Tom’s being buried on his motorcycle (which is vertical in the grave and he’s seated on the fucking thing), and everyone throws flowers onto him while some jackass plays a ridiculous song on his guitar. It’s painful to watch.

Aside from scenes like that, everything else plays out really good. There’s some black humor, some genuine atmosphere, and a surprising lack of blood. These kids jump off buildings and bridges, get ran over by trucks, and yet there’s not a drop of blood. That’s just one of the many little things that take you out of the film, but not to the point where you loose interest.

While Psychomania is a God awful film (the lead actor who played Tom openly trashes it), it’s not boring in the least. It’s unintentionally stupid at times (and feels a little too family friendly in places), but it will keep your interest and entertain in a way many movies can’t. The action is great, the characters are asses, the story is classic, and it’s all a ton of fun. Also, the ending is brilliant. It goes from being so stupid that I felt like my IQ was dropping faster than BP stocks, to creepy as hell. Then the credits roll. If you’re going to make a movie as bad as Psychomania, then give it a borderline perfect ending, I can’t help but applaud you. While it’s not gold, in a sub genre that includes such classics as Zombie Bikers from Detroit and Chopper Chicks in Zombie Town, Psychomania truly is one of the best.

The Package– So, apparently the negative to Psychomania was lost. Thankfully Severin was able to crank out a good, but flawed, transfer from the only uncut 35mm print left. As to be expected there’s grit and print damage, but the main issue with me was that the picture looks really soft in more than a few scenes. The good news is colors are balanced and strong, so that helps with the softness. It’s far from unwatchable and a thousand times better than the gray market disks floating around, but it really shows it’s age.

The audio has the pops and cracks that are to be expected with a film this age, but overall the audio mix is good. The soundtrack is damn good, and this transfer really showcases the film’s score. The song that the guitar biker plays at the funeral is unfortunately free of any distortions, and the volume is well balanced, making every note equally painful. All joking aside, you can tell Severin worked their asses off, and Psychomania sounds great (again considering the age).

Severin has included some great extras that were created just for this release. The attention getter is an interview with the lead actors, and most of the gang, called Return of the Living Dead. Also included is Sound of Psychomania, a featurette with the composer of the music (the score not the funeral song), Riding Free, an interview with the man who composed the funeral song (he explains how the filmmakers totally butchered his work by putting it in the funeral scene, as well as how the character that lip syncs it has no clue how to even hold a guitar), an introduction by Fangoria editor Chris Alexander (who loves this movie to an unhealthy degree), and the original trailer. Severin has honored the cult following this film has earned over the years, and not a damn thing about this release will disappoint.