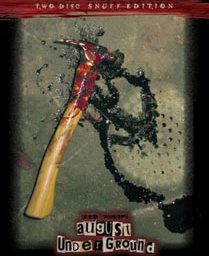 The Film– August Underground has almost no plot. It’s just the home movies of two buddies (one always in the eye of the camera, one always behind the camera) goofing off, going to metal concerts, and viciously killing people. They are violent towards almost everyone they see, and usually keep victims in their basement; torturing them for days.

I know what you’re thinking; "what kind of a lame ass synopsis is that!" Well, when you hear people mention August Underground, it’s usually just referred to as "fucked up"; so you can’t complain that I at least showed some effort. There is no real way to review this film without spoiling it; so this will be one hell of a task on my part. In all honesty, you’ll pretty much be reading my opinion; so your enjoyment of this review will depend on how well you enjoy the way I perceive things. That sounds much more conceded than I intend, I assure you.

August Underground is one of the sickest flicks out there; it’s just that simple. Some people who think they’re high and mighty bash this film because "it’s not really horror, it’s just sick and that’s not horror". These people are the ones who like to see glamor babes and guys with six pack abs, outlast all the other carbon copy characters, and defeat the killer at the end. While August Underground is not traditional horror, it is still a horror film, like it or not. If you disagree, then tell me where it should be placed? And no, Pseudo Snuff is not it’s own genre; it’s a part of horror. Vogel did this film while teaching at Tom Savini’s SFX school; and really showed how great of a teacher he was. It’s like seeing your History teacher win his 5th game in a row on Jeopardy by answering some obscure question about Lebanon; it just shows how talented they are. You can’t argue against the effects, because they are some of the best you’ll ever see. So simple (I won’t ruin it, but when you listen to the commentary, you’ll see how cheap the SFX were), yet so realistic.

Alright, time to dive into the scenes that really make August Underground so vile and fantastic. Well, we start out with two drunk, giddy friends entering a basement. In the basement, we find a nude, mutilated woman tied to a chair, covered in her own waste, and sobbing. In the bathroom is her boyfriend with his penis chopped off, and nonchalantly thrown in the toilet. The killers laugh, then head upstairs for more beer. This is what makes August Underground so powerful. Within the first 5 minutes, the film presents you with a fork in the road; either strap in for a rough ride, or take the easy way out. It’s not designed to draw in teenyboppers and their dates; it’s designed to mortify. This is as anti-Hollywood as you can get people. Those who chose to finish this grueling film will also witness dismemberments, psychological and physical torture, beatings, and one of the roughest sex scene out there (think donkey punch times 100).

This is the final segment of the film portion of this review, I promise (like I said, this review depends on how well you like my opinion). This is what makes August Underground so damn powerful; you. You do. If you sit through this film, you will feel it. I have seen real death footage (which I personally hate, but oh well) and all that makes me feel is mad. You’re mad that these terrorist bombed a school; you’re mad these Ukrainian kids beat a man to death. You’re never mad at this film, because you chose to keep watching it. It will horrify you, but not piss you off. It feels more authentic than anything you can find on Rotten or TheYNC, because it looks at the mind of the killers. They can’t find any difference in jumping over hay bales and killing a prostitute. But you can, yet you still watch it; maybe even enjoy it. And it’s not what you see, it’s how you see it. When I invite a friend over for the first time, there’s a 99% they’ll look at my movie shelf and asked "where are the comedies at"? I show them the cover to Hell of the Living Dead and they look at me like I’m crazy. I put the film in, and then they understand what makes it so funny; the execution. In terms of content, Violent Shit is more gross and disturbing than August Underground; but look at it! It’s execution and final product is goofy and silly. August Underground is really only designed for people who want to experience dread. The second and third films in the series are more about the money shots, but this one is the real deal (not that I’m saying they’re bad, because they’re not; they’re just different types of films) The content will shock you, the effects will shock you; but the fact that it’s so authentic, so dreadful, and you choose to watch it- that’s what will horrify you.

The Package– Like I’ve said all along, you have to want to watch this. The quality is God awful, but purposely God awful. It looks like a really bad VHS, but it makes things look so much more authentic. The beauty of the crappy quality is that it hides the smoke and mirrors behind the effects; making everything seem that much more realistic. You actually feel like you’re watching a snuff film (I know, I have seen one), and it’s not pleasant. I don’t judge on how sparkling clear a transfer is; I judge on how fitting it is.

The audio is really odd. Everything sounds like it’s beside you, because the mic was about 5 inches from the cameraman’s mouth. You’ll hear every whimper, laugh, grunt, groan, and snicker from the killers; but most of the natural noise is absent. There’s some parts where the two walk around in a parking lot and talk about killing an old lady, but the cars sound muffled and far away. Again, it feels like it was shot on really bad VHS. It’s not faded or transfer issues; it’s intended to be this way. And quite frankly, it works.

Here’s where the illusion is revealed; and it’s okay to like this part. This 2 disk set comes with: an introduction by Fred Vogel, Hammer to the Head- A Closer Look at August Underground, August Underground on Location, Behind The Brutality, August Underground: Too Real For Comfort, An Outsiders Perspective, 2 audio commentaries, and a slide show. The extras have a different attitude than the film, and you’ll really enjoy them. As a die hard TTP fan, it’s fun to see how they made what is arguably one of the most notorious films around; but it keeps enough seriousness and secrets to not spoil it on your next viewings. if you can handle them.

This review is for the OOP Snuff Edition (which runs around $300 on eBay), but the current 2 disk set has the same extras. Only difference is the Snuff Edition is limited to 1000 and signed by the staff.

Take a break from watching these disturbing movies and relax with some online games! Visit USACasinoCodes and get free spins when you redeem any of their no deposit bonus codes.

Create your own review
Average rating:   1 reviews
by mrjoker on
Candy