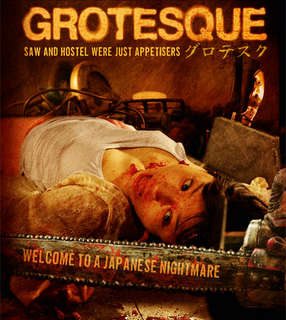 The Film– Grotesque begins with a sadist capturing a virginal couple on their first date. They awaken gagged, and tied to large sheets of metal. The psychopath tells the couple he wants them to fight to survive, because their will to endure his tortures gets him off. If their survival instinct is great enough for him to climax, he promises to let them go. After some nasty torture, he is satisfied, and begins to treat their wounds in a makeshift hospital. However, the experience is far from over; as anyone above a 2nd grade education could have guesses.

Okay, I wanted to like this movie. In fact, expected to do nothing but praise this flick, because it promises nothing but cruelty, realistic gore, and very disturbing content. It delivers a stupid mix over the top antics, plot twists you could see from the first two minutes, and countless "look what I just did" scenes.

Next, we’re treated to out victims having their fingers sawed off. The girl begs the killer to stop, so he cuts off something a little more sensitive; as well as her arm. The male is given the option of having his balls nailed and his penis chopped off. If he accepts, the girl will be spared for the time being. He accepts, but none of the procedure is shown, save for some closeups of prosthetics. This is what annoyed me, no male nudity is shown. It’s perfectly okay to show female sexual mutilation (which is mild), but showing the extreme torture of the gonads is left out.

This flick was made with the intention of being a huge middle finger to American torture flicks. A film trying to out-do another usually fails, but this one skimps out on the very thing it promises- grotesque torture. No joke, the most cringe worthy scene is shot using angles to hide the money shots. Another thing, there’s numerous references to Japanese extreme films (Guinea Pig films, Ichi the Killer, Evil Dead Trap II, and Tomie, just to name a few), yet it was made to combat American torture flicks. This is dumb, if it had been made as an homage to Asian Extreme cinema, it might have been pretty good.

The final reason I dislike this film is the marketing campaign. The director submitted the film to the BBFC with the intention of it getting banned. Of course it was banned- a sexually violent film getting banned by the BBFC is easier than getting accepted to a technical college. It’s the same ploy Nick "That Shit is Hardcore" Palumbo used to shill out Murder-Set-Pieces in 2005. All of this comes to a head when you find out Grotesque has no American dvd release. Really, it’s not even in the talks. This middle finger to contemporary American horror films, isn’t even on an American dvd. Brilliant. This half-assed attempt at horror seems like it was made by a group of horny 13 year old guys who thought it would be a good idea to mix their wet dreams with Harakiri, then promote it using shady and immature means.