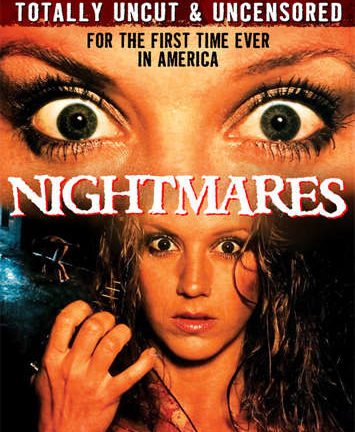 The Film– One night in 1963, young Cathy walks in on her mother and boyfriend (or possibly step-father, explanation really isn’t a big deal or anything) having sex. She seems upset by this sight (while I’m no Kama Sutra expert or child psychologist, I’m willing to bet her horror was the realization that sex doesn’t occur in the position they were in, leaving only one possibility- navel penetration), and quickly runs off.

A few weeks later the family is driving during one hell of a rainstorm. Cathy awakens from her sleep to see her (possible) step-father with his hand up mommy’s skirt. Mistaking pleasure for pain (totally impossibly to tell those two apart by the way, just ask one of the Cenobites), Cathy attacks the man, resulting in a car crash that throws her mother through the windshield. And just to guarantee the girl will be mentally ruined for life, her mother’s throat is split open by the broken glass.

Well of course mommy’s fuck buddy blames the entire incident on Cathy, and she completely loses her mind and attacks an orderly. This turns out to be yet another nightmare suffered by Helen (who’s since changed her name from Cathy), and she wakes up terrified. With a childhood that made Henry Lee Lucas’s seem tame in comparison, something tells me reliving the memory every night REALLY isn’t a good sign.

In the present day, Hellen is auditioning for the lead role in "A Comedy of Death", an insanely boring and pretentious play by director George D’alberg. Helen wins the part of course, and also beings a relationship with the male lead, Terry. After revealing he’s her first boyfriend, the couple agrees to take things slow. Some of the other females on-set also have a thing for Terry, so make sure you keep an eye out for future victims during the cast meetings.

That night a couple sneak into the backstage area to fuck around. After the mandatory pre-stabbing nudity (which is pretty gratuitous I must say), a high heeled, black gloved killer shatters a window pane nearby and slices the couple to bits with a shard of broken glass. Now I love the ambiguity the film makers tried to put in this movie, but come on, who else would have a hard on for broken glass sex murders?

The next few days of rehearsals are nothing but George spouting ridiculous insults and generally being an over sarcastic jackass. One great example is comparing the supporting actress to a “big brown freckle”, which apparently means asshole.

Things are shaken up when snooty critic Bennett, shows up to unnerve George. After Terry and Helen begin to get serious (despite a little episode from “Cathy”), one of the stage hands decided to try and get a little frisky with Helen’s man. Bad move on her part, because she ends up with a shard of glass embedded in her spine later that night.

The blame is initially cast on Bruce, the David Hasslehoff of the group. Well he’s almost instantly dropped as a suspect, and the play opens to a packed house. Aside from one or two forgotten lines, the show is a hit with everyone- except George and Bennett. The critic invites the cast and audience to an after party, where he rambunctiously flirts with almost everyone in attendance; most viciously Helen and Bruce.

Bennett’s bad review, stumbled upon by the cast during the party, “mysteriously” is absent from the paper the next day. Thankful for the lack of harsh criticism, plans for the second performance go into full swing. What also goes into full swing is the shards of broken glass, as Helen begins one final rampage to take out anyone who’s showed any signs of sexuality during the production. Oh shit I didn’t mean Helen, I mean “the mysterious slasher”…

Pointless anecdote about the generic nature of the title(s) aside, Nightmares, or Stage Fright, is a 1980 Oz slasher directed by John D. Lamond; neither of which I had heard of until watching the fantastic Not Quite Hollywood a few years ago. After seeing the trailer, chock full of bloody violence and full nudity, I was expecting Nightmares to be a lost gem of the slasher genre. Turns out I was kinda right, but for all the wrong reasons.

Let’s just start off with the selling points here, tits n’ gore. Well its got the nudity in abundance, but don’t expect a gorefest. While this is a bloody as hell movie, the most gruesome it gets is prolonged hack and slash sequences. As I mentioned, the weapon of choice is always a piece of glass, and that’s pretty much a cut-only weapon. I imaging it would be hard to dismember anyone with one of the easiest-to-break substances around. Actually I take that back, one shard falls from the light scaffold and stick into the wooden stage without breaking. Where was this shit forged, Three Mile Island?

And what else does Nightmares have, aside from these slasher staples? Um, well, an Australian-Victorian metaphorical melodramatic comedy about death… Starting to see why this wasn’t popular during the heyday of slashers? Nothing says “date movie” like pubic hair and dry humor, does it? But what it lacks in plot, it makes up for in characters.

Despite my annoyances with George, he’s goddamn hilarious. Nothing and I mean nothing pleases this man. I always thought I had a personality like sandpaper, but I bet he could make Nardwuar pissed off. Also overacting to borderline retarded extremes is Helen, played by Jenny Neumann of Hell Night fame. Her psychotic episodes consist of growling in a deep voice (the “Cathy” personality) and giving a bewildered, coke-eyed stare for minutes on end.

But the real show stealer is John Michael Howson as Bennett the critic. I’ve never seen or heard of this actor before, but he looks like he would be first choice on a short list if Gene Wilder turned down a role. You just have to see this guy in action to understand how awesome this character is. Hitting on Helen and Bruce in the same scene, he’s just a goddamn oddball who really brings some unintentional humor.

You may have noticed I have been less than subtle about hiding the fact that Cathy and Helen are the same person and the killer in the film. Well, that’s because it’s everything but thrown in your face from the first five minutes in. Killer’s MO: eliminate anyone who’s sexually frolicking, and slice them up with a shard of glass.

Gee, I wonder who would think to kill people like this? Maybe the emotionally deranged girl who’s mother was killed almost exactly the same way? Nah, that’s just goddamn stupid to make that connection. And that’s not even including that HELEN HAS NIGHTMARES ABOUT THE MURDERS! I mean they didn’t even include a red herring for fucks sake.

Now all of this tomfoolery makes for one hell of a fun movie, but the only major flaw I found was the editing. I’m not even joking when I say every transition is a fade cut. There are a few cross-fades, but 90% is just the basic fade to black. Probably a tenth of the movie is a black screen from the obnoxiously long scene bridges, and seeing as how the movie is rapid and can change scenes up to five times in a minute, this really, really gets old fast.

A by the numbers slashers with blood, boobs, and POV stalking- combined with a wacky plot and characters, Nightmares is pretty much an entertaining disaster from the moment it starts. The overall derpy-ness of the “whodunit” plot, fast pace, and unintentional humor make Nightmares a fun film, but the editing and an ending that will make you want to smash your T.V. nails it in place as just average. I’m not saying it’s bad (well in a negative way at least), it’s just annoying and almost insulting in some places. Worth checking out to fans of the 80’s slashers, but I don’t see this being the uncovered gem people have been waiting on.

The Package– This transfer is a mixed bag, because while it is virtually damage free, it’s also very murky looking in some places. Details don’t pop put during wide shots, and some scenes look like they’re coated in Saran Wrap. But on the plus side, the only noticeable damage is a few “white floaters” here and there. Not a bad transfer, just a little hard on the eyes sometimes.

The audio is a Dolby Mono track that sounds great. Everything is crisp and balanced, showing off the hammy dialog and booming score from the prolific Brian May (who contributed to everything from Oz staples like Patrick and Mad Max to Dr. Giggles and Freddy’s Dead).

Severin has included an audio Commentary with director John Lamond and Mark Hartley, director of Not Quite Hollywood. There’s also A Brief History of Slasher Films featurette with Going to Pieces author Adam Rockoff, a John Lamond trailer reel, the trailer for Nightmares, and trailers for other Severin releases Bloody Moon, Psychomania, and the upcoming Horror Express. The Brief History of Slasher Films is the same featurette included with Bloody Birthday, and while it fits this movie significantly better than the later, I’m still not a fan of it. Maybe it’s because it is brief and skips many of the really great slashers at the time, but it just seems as bland and generic here as it did on Bloody Birthday. Other than that, everything else works great (especially the trailer for Horror Express, I know everyone can’t wait for that one).