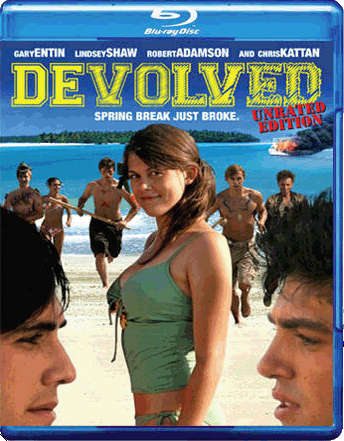 FILM– During Spring Break, a boat full of high schoolers on a whale watching trip (people still do that?) explodes off the shore of a South American island. The unpopular kids on the trip grab one life boat, and the popular jocks grab the other. The unpopulars wash up on the island- miles away from civilization, and apparently the only survivors (the "popular kids" in the other life boat are MIA).

In all the preceding commotion, the head cheerleader, Peggy, accidentally boarded the wrong boat. That’s lucky for our antisocial hero, Flynn, because he wakes up to his dream girl giving him mouth-to-mouth. Maybe this crash wasn’t so bad after all…

After taking a headcount, it seems all the losers are accounted for, plus Peggy. Peggy secretly loathes all of the popular kids, and while her facade of missing them seems strong, Flynn sees right through it. After setting up a base camp, Peggy and Flynn begin a soft little relationship.

But everything in paradise is ruined when the jocks (oh look, they didn’t die at sea. Shame) come storming the nerds campsite. After the whooping assholes lay the site to ruin, their leader (and Peggy’s boyfriend), The Rog, steps forward to set down the rules.

The Rog- football MVP, body shots record holder, and number one candidate to be the target of a school shooting. This guy is Jock Jesus, being the beacon of bas-ass to every popular kid in school. He’s even so edgy that he gets a "The" in front of his half name (calling him Roger usually results in a beat down).

Of course this guy has not a damn bit of leadership skills, so the whole "stranded on a deserted island with no sign of being rescued and limited resources" thing doesn’t bother him. He thought ahead to steal the ships supply of hooch, so the populars just spend their time drunk, high, and being generally stupid.

The nerds decide they need to eliminate The Rog in order to unify the group and work toward rescue. Flynn convinces Peggy to leave Rog (and subsequently be with him), and during the break up she lures him off into the woods. With the help of some botched LSD, a slowed down track from popular artist T-Rey, and a Roger look-a-like, they manage to trick the jocks into thinking The Rog is a monstrous, possibly homosexual, maniac.

Things begin to get better for the cast always. A signal fire is built, shelter, food, and lavatories are not an issue, and everyone is actually bonding. But this peace is short lived- since his exile, The Rog has been nursing the football coach back to life. And with his words of encouragement, as well as some coca leaves, The Rog decides it’s time to take back control and make the nerds pay. Epically the one who stole his girl.

So last year I heard one of the head honchos at Severin Films would be making a movie. Naturally I was interested, since the last movie directed by one of the owners of Severin (David Gregory’s Plague Town, which was also co-written by Cregan) was a total blast. Eventually I found out it was John Cregan. Most Severin fan will probably remember him as "John Severin" from the Sinful Dwarf featurette, and naturally I figured this was going to be an ultra-sleazy horror or exploitation film.

…and instead we get a teen comedy? Not only was I surprised, but I was actually very excited. I have a very odd, demented, smart-ass sense of humor, and not many comedies truly make me laugh. I kinda realized at this moment that if a fan of The Sinful Dwarf can’t make me laugh, then nothing ever will again.

Well, I laughed my ass off. In my opinion, this is almost a prefect comedy- but only for the right people. Flynn is a sarcastic guy who pokes fun at the preps every chance he gets. Not to his extent, but that’s pretty much who I was in high school.

Another thing that makes Devolved succeed is a mix of quirky, random, and crude humor. It’s pretty much like having an AP level English class full of Aqua Teen Hunger Force and Tim & Eric fans. Again, I find these things hilarious (maybe a little more ATFH than Tim and Eric), and any film that manages to be sophisticated and random, yet still educe laughter, accomplishes something most indie comedies fail at miserably. Just like Napoleon Dynamite. I fucking hate Napoleon Dynamite.

The plot is pretty much genius and idiotic at the same time, but in a good way. It’s like someone in literature class just zoned out while reading Lord of the Flies, plugged their self into the story, manipulated it to fit their tastes, tweaked the ending, and came out with a huge sense of satisfaction.

Devolved also gets into the dreaded "what comes after high school" territory, where many comedies try to get all serious and come off as just a pretentious piece of garbage. By using that clever humor ("does anyone else feel like we peaked at 18?"), Cregan manages to actually showcase the post-high school fear of some people, and still manage to stay on the same beat.

Awkward, sarcastic, cautionary and truthful, Devolved is a damn funny movie with some interesting views on life (during and after high school). I really don’t feel this movie is counter culture per say, but I bet the humor of Devolved will fly over the head of many people who only enjoy Seth Rogan-ey style comedy.

Yeah there are some flaws with the acting and computer effects, but bitching about that in an independent film is idiotic. If you’re an oddball like me, and enjoy oddball humor, then you’re going to laugh your ass off. And it has Chris Kattan! I know I can’t be the only guy who finds Corky Romano funny… Right..? 8/10

PICTURE/AUDIO– The transfer looks great, showing vibrant colors and minimal noise (and virtually no adverse DNR effects). The compression looks good, and overall everything is seamless. 8/10

A stereo mix is included, but I watched Devolved with the 5.1 DD track. A clean transfer with overall nice balance and volume, there’s not a thing wrong with this sound mix. 8/10

BLU-RAY– The only problem I had was the bulky pop-up menu on the top of the screen, but this is the first Blu that actually had a fully functional pop-up menu. You can access it during the film AND features, which I have not seen in a BD thus far. The bulk is annoying, but the unlimited access makes it worth ignoring. 9/10

EXTRAS– There’s a making of featurette, a handful of deleted scenes, audition footage, trailers (Devolved plus a few other Severin titles), three music videos (including a T-Rey song), and two short films- Live Tomorrow Today (an infomercial to accelerate kids) and Reverse Planet (about rival factions in an old folks home). Everything is interesting, funny, and worth checking out. 8/10