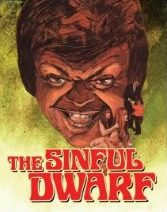 The Film– Olaf, the titular dwarf, would automatically strike fear into the hearts of any normal person. But if this film were full of normal people, it would be pretty boring, eh? So here’s the dwarf, now we need the sin. From the first 5 minutes, this film piles on the sleaze. After kidnapping a girl (using his extensive wind-up toy collection), Olaf, along with his vaudeville wannabe mother, imprison her with the rest of the "captives" in the attic of their hostel. These "captives" are none other than sex slaves kidnapped by Olaf, who then gets them addicted to heroin (to ensure they don’t run off). He then proceeds to pimp the girls out to horny and perverted men. After that mess is sorted out, along come Peter and Mary- newlyweds who take up in one of the spare rooms. Well since Peter is trying to get some cash to support himself and his new bride, he heads out looking for work in the following days. This is really, really bad for Mary, because it turns out that Olaf likes her- well, he likes her shackled and doped in the attic….

I don’t know if I want to bow down to Severin for releasing this, or flee in terror. Not many companies would release this movie- I mean, it’s so vile that I’m pretty sure repeated viewings will make you unable to reproduce. My local rental shop has a warning taped to the cover "one of the sickest films ever made!", and they hit the nail on the head. Most films that cross the line to this extent are toned down in some way. Either cleaver camera angles designed to hide the more unsavory shots, or lackluster filler scenes to kill the depraved nature. Every now and then you’ll get a flick with a scene that would make any veteran sicko flinch, and The Sinful Dwarf is made up entirely of those types of scenes. Torben Bille plays Olaf, and deserves an Oscar for his performance. He is one of the evilest little things to ever grace the screen. He plays his character perfectly, quivering with anticipation over what sick act to commit next (like shoving his cane in vaginas, or pumping the girls up with dope). To think he was at one time a children’s show host is kinda creepy to say the least.

The setting is marvelously grungy looking, and seeing (once) beautiful women chained in a room covered in stains and dust is as bizarre as it is unsettling. The toys give it a very innocent look, but at the same time make it feel very uncomfortable. Seeing Olaf hack apart teddy bears to retrieve heroine hidden inside is exactly what I’m talking about. The lead actress is nothing less than a sexpot, and I was almost driven to despair when I found out this was her only film (which comes at no surprise). To give anything else away would ruin the fun, but if you’re looking for a really out-there, grungy, filthy movie, The Sinful Dwarf will ruffle your jimmies quite well.

The Package– The picture shows its age, however I feel that makes the “filth” more genuine feeling. Also the scenery, accompanied by the picture quality, is quite creepy. Some spots have very noticeable damage though, and these spots are quite distracting. Overall Severin’s transfer of The Sinful Dwarf looks a little rusty, but still a quality job.

This 2.0 Mono track is mildly soft in some places, and has a few spots of damage, but no major fading or distortions. The mix sounds great and keeps steady volume- and for a film this old and forgotten, that is a pretty impressive feat.

How do you follow up a film like this? Well, you add one of the weirdest featurettes of all time. I’m talking about The Severin Controversy, a mockumentary about 2 movie goers who had their sanity destroyed by this film (Hosted by John Cregan under his “John Severin” moniker). Severin also included some radio spots and a trailer (under the title Abducted Bride), just to sweeten the cupcake. These extras are the perfect complement for this rotten film.