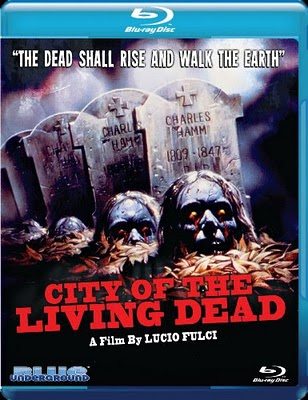 FILM– While a group of psychics preform a seance in a New York apartment, one of them, Mary, begins to witness horrifying visions. She sees a disturbed priest pacing around the cemetery of "Dunwich", then hanging himself from a tree in the middle of the graveyard. This vision causes her to fall over, dead of fright.

Well since this is an 80’s Italian film set in New York, we’re introduced to the obligatory sleazy reporter character, Peter, who’s interested in finding out what caused Mark to just keel over. After being shooed away by the police, he heads to the cemetery to sleuth around Mary’s grave.

The lazy caretakers went on a break before fully covering her casket, which turns out to be a good thins since Mary suddenly awakens. She begins screaming and clawing at her coffin, so Peter chooses the logical approach to this situation- he begins to rip the casket apart with a pick axe, missing her face by centimeters. Remember, logic is key when approaching a situation such as this.

So after somehow not puncturing Mary’s skull, she introduces the head psychic to Peter, and she reveals the vision that made her "die". Somehow she knows that the priest committing suicide has opened the gates of Hell, which fulfills a prophecy from the Book of Enoch. Knowing the world is doomed if they just sit around, Mary and Peter head off to find Dunwich.

Meanwhile in Dunwich (a New England area with supposedly strong connections to the Salem witch trials), things have been going all to Hell- literally. First little things started to happen like strong wings and an omnipresent dust storm, but with such a dark supernatural background, the residents try to brush things aside.

One night, a teenage girl is murdered by Father Thomas (as his name is revealed to be), who then begins to supernaturally cockblock a couple making out in a car. After they see his corpse appear hanging, he begins to stare into the girl’s eyes, causing her to vomit up her entrails before squeezing her boyfriend’s brains out.

With the sudden rash of murders in the city after Father Thomas hung himself, the citizens think the local weirdo, Bob, is to blame. Bob is a quite, mildly disturbing guy with a gimped back, but since he was with one of the victims the night before, he’s obviously the culprit.

Eventually the New Yorkers arrive in Dunwich, and team up with a psychiatrist and his patient to put an end to the evil priest and his zombies- but as soon as they arrive the shit hits the fan. The dead are coming back to life as supernatural zombies, and since Bob is no longer a suspect (thanks to an overprotective dad and a drill press), Dunwich must realize what evil has been awakened.

Lucio Fulci, easily one of the most well known and respected names in horror. Even if you don’t like his work, you can admire his legacy, and City of the Living Dead is easily one of his most well known films- mainly because most people think it makes little sense and relies on gore-heavy kills.

So I’ve got to say, I have no clue why people bitch about this plot. I mean it’s illogical how Mary would know exactly what to do while no one else would (and it’s even sillier how it gets done), but it’s not a totally out there idea. It kinda reminds me of a Lovecraft story in that is uses a complex yet stupidly simple plot to weave a series of gross and creepy scenes together- and it works beautifully.

For this outing, Fulci was trying to capture that nightmare-ish feel that movies like Suspiria created with color and atmosphere, almost making the setting into a character its self. While he didn’t go as far as Argento or Bava, the mastero easily manages to create some hellish images and scenes with his trippy editing and bright colors.

Normally I would consider this spoiler territory, but since these two particular scenes are included in EVERY goddamn horror montage on YouTube, I’m going to push my luck. The most infamous moment of the film is either a toss up between Bob getting drilled in the head, or the woman puking her guts up. Honestly, there’s not much I can say at this point in time, the material speaks on its own. The gore is pure insanity.

My favorite thing about the film was how Giovanni Lombardo Radice (John Morghan) portrayed the character of Bob. In the first scene he’s introduced, he walks into an abandoned house, finds a blow-up doll, inflates it, then just smiles at it with a sadistic smirk on his face. He says three lines of dialog in the entire film, but still manages to convey a message of "I’m a seriously fucked up individual". Plus, he’s also able to be convincing as a victim when the crazy dad skewers his brain on the drill press. That’s talent.

Plot inconsistencies aside, it’s really hard not to love this movie. It has everything Italo-horror is known for: intense gore, eerie lightning, and, more than anything, a fantastic soundtrack. There’s no point in being melodramatic about a film this famous, so if you haven’t seen it, do so as soon as you can. 9/10

PICTURE/ AUDIO– Seeing this baby in 1080 Widescreen is like watching it for the first time. Before this I had the old Anchor Bay DVD, and this new transfer from Blue Underground makes that disk look like shit. Some scenes look a little noisier than others, but generally this picture is spotless. The standard "curly Q’s" and other small damages is of course there, but this transfer has easily brought some of the lighting and zombie effects to my attention that I missed on previous viewings. I don’t care if I’m overshooting myself, this is a perfect transfer. 10/10

While this disk comes with the original Mono, and a 7.1 DTS-HD track, and the attention-getter is the 5.1 mix. Great balance with minimal distortions, plus this transfer complements the fantastic soundtrack. 8/10

BLU-RAY– Another great release from Blue Underground, but that was to be expected. A nice main menu and easy to navigate Pop-Up menu, good sizing, and good overall presentation. My only issue was the extras menu is about three pages long, but this annoyance is overlooked by how abundant the extras are. 9/10

EXTRAS– There’s The Making Of City Of The Living Dead, which is a half hour featurette featuring everyone from MacColl to the makeup artists and camera operators, two interviews with actors MacColl and Radice (rocking a tee shirt depicting his gory demise, that’s just the epitome of awesome), another featurette where those involved reminisce about their experiences working with Fulci (and how infamously difficult he was), a marketing gallery, and some trailers and radio spots. This is pretty much everything a fan could ask for. 10/10