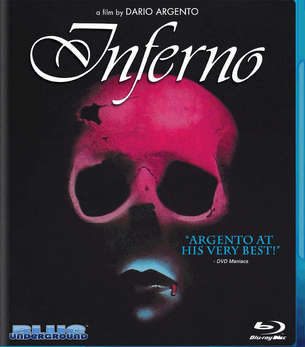 The Film– Rose is a poet living in an oddly creepy apartment complex in New York. She frequents the antique store down the block, and one day the eccentric shopkeeper, Kazanian, sells her a copy of The Three Mothers, a book written by an alchemist-turned-architect, Varelli.

In the book, which is claimed to be neither true or fiction, Varelli explains how he was instructed to build homes for the Three Mothers, evil witches who bring death and sorrow to everyone. Mater Suspiriorum in Freiburg, Mater Tenebrarum in New York, and Mater Lachrymarum in Rome. Varelli also gives several clues about finding secrets in the houses.

After a cryptic visit with Kazanian, Rose lets her curiosity get the best of her. She ventures into the basement of the complex, where she finds a small hole filled with rain water. After dropping her keys in the water, she realizes this is more than just some drain, so she swims down to find her keys and explore the underwater chamber.

What she finds is a fully furnished ballroom- its centerpiece, a mural with Mater Tenebrarum inscribed underneath. After recovering her keys, rotten corpses begin to float out of dark corners of the room. A horrified Rose surfaces from the submerged room, and writes her brother, Mark, begging for help.

Mark is studying music in Rome. While in class, he begins to read Rose’s letter, but a beautiful woman (Lacrimarum) captivates him, distracting him and making him forget the letter. His friend Sara picks it up to return later, but it’s content begins to peak her interest and she heads by the library on her way home to pick up a copy of the book.

Well since the evil forces at work don’t want anyone to interfere with the Mothers, a deformed henchmen for the witches tries to kill Sara, who drops the book on her way home to save her life. After arriving home, she invites her neighbor over to keep her company (who thanks to a language gap comes off as a racist asshole), but someone followed her home and butchers them both.

Mark swings by to get his letter, but when he finds it, and his friend, in pieces, he knows he must head to New York to see what his sister was so afraid of. He calls Rose to let her know he is en route, but during his flight she suddenly goes "missing" thanks to another clawed henchmen…

After arriving in the states, Rose’s friend Elise, who also lives in the building, pulls Mark aside to tell him about all the bizarre things that have been going on. The only other tenants are a wheelchair bound Professor and his live in nurse, and the cat loving landlord.

While Mark tries to find his sister, as well as piece together the mysteries of the Mother’s house, he becomes sucked into a supernatural nightmare of murder and corruption. As the only people who know anything about the Mothers begin to die unexplained deaths, Mark tires frantically to unravel Varelli’s riddles in time.

Dario Argento is beyond any doubt my favorite director. In my opinion, he directed the best horror films to come out of Italy. Now, he has done some ungodly movies like Phantom of the Opera and The Card Player (which I still hold as a guilty pleasure), and his new movies are alright, but when it comes to classic Euro horror, the first name that always pops into my head is Argento.

So how does one follow up Suspiria, easily one of the most nightmarish films ever made? Well, you just make one that mind fucks the viewer twice as hard and still manages to look pretty. And don’t get me wrong, I’m a huge fan of the movie, but this outing is almost entirety an audio and visual thrill ride.

I mean seriously, who can watch a woman swim into a drainage trough, then find herself in a corpse filled ballroom and rationalize what they just saw? Or watch a deformed cook of some kind stalk a woman in the corridors under a library? It makes no sense, and that’s why I love this movie so much.

Almost every horror movie released now has some bullshit explanation tacked onto the end right before the credits, and it’s usually in montage form. What makes this movie so appealing is the dreamlike nature of everything. It’s like how a dream makes perfectly logical sense while you’re sleeping, but as soon as you wake up you’re all like "WTF was that shit?"- Inferno is just like that.

The first thing that’s going to pull you in is the vibrant lighting. Haunting pinks and blues replace the rich greens and reds that were in Suspiria, and in this setting it fits. I can’t exactly describe how the lighting affects the film, but it’s almost a character its self. Without the lighting to heighten the surreal factor, Inferno would be almost unwatchable.

I’ve already talked about this, but almost everything in the film makes little to no sense. The plot and structure are really simple, but since there’s a different killer for every murder, random bits of supernatural malice, and evil animals, It’s REALLY hard to explain over 80 percent of this film. But again, while it’s on your T.V, everything makes perfectly logical sense.

As for the kills, they range from innovative to just hokey. The dumbest scene in the entire movie is where a mob of angry cats attack a woman, and even if you’re not looking you can see the arm of the crew member throwing them. But on the other side, there are some brutal, haunting deaths (like a bloody woman ripping through a white sheet with her fingers).

This was the first time I have watched Inferno in probably five years, and in all honesty the only thing I remembered was the flooder room and the ending (which some people absolutely tear to shreds, but I personally thought it was pretty good). That’s the great thing about Argento’s work; you can go a while, then sit down and watch one of his films and it will be like watching it for the first time. I think this is because his films follow a virtually illogical plot and the intense visuals are what you take away with you.

Despite the illogical nature of the film in hindsight, when you’re watching the film it seems like one of the greatest pieces of celluloid ever recorded. It’s got some hokey bits, and your imagination has to fill in more than a few gaps in the story, but the feel and the experience of watching Inferno is exhilarating.

The Package– Aside from a slight coating of noise here and there, as well as a few places of softness, this is a beautiful transfer. The darker scenes look beautiful with their strategically placed colored lights, and the settings look haunting. It never gets too grainy, but there are a few scenes where the colors are almost too overbearing. Not as far as hue, but one scene with a bright blue light almost eats the features off Elise’s face. But this is such a beautiful film, and this transfer showcases it better than any other medium so far, so there’s no point in bitching about the few errors.

I watched the film with the 5.1 track, and it blew me away. The score is a thunderous Latin opera, and my only complaint is that it has a tendency to drown out the dialog. Aside from the sometimes too powerful soundtrack, there’s nothing else negative. Also included is a 7.1 track for the serious HiDef fans out there.

Another simple, effective Blu-Ray release from Blue Underground. Text is legible, easy to navigate menus, and an overall polished look makes this a must own Blu for Argento fans.

There’s an interview with Argento and Laberto Bava where they discuss everything from the alchemy-infused story to Mario Bava’s assistance with the nightmarish effects. There’s also two interviews with actors Irene Miracle (Rose) and Leigh McCloskey (Mark), as well as the international trailer. If my memory serves me right, all these extras were available on the DVD, so that’s a bit of a let down (EDIT- my memory did not serve me well, only the trailer and interview with Argento and Bava were on the DVD) – but regardless this is a decent amount of extras that are essential to fans.