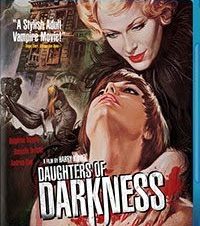 FILM– Newlyweds Stefan and Valerie are on the night train from Switzerland to England. After only three days of marriage, Stefan is reluctant to introduce his bride to his mother, who be thinks will become furious because of her Swiss heritage; but Valerie insists on getting this inevitable meeting out of the way.

Their plans become kinked up when another train derails up ahead, stranding them in Ostend, Belgium. Luckily, there is a beautiful seaside hotel in the city, and the couple head inside to book a room. The concierge, Pierre, tells them the hotel has been through a dead spell recently, and they are the only people who are checked in.

After a night of typical newlywed behavior, the morning brings disturbing news. A story in the local paper states that a serial killer has been going through Bruges recently, mutilating virgin girls before slitting their throat.

Also during the previous night, a mysterious Countess, Elizabeth Bathory, and her "secretary " Ilona, check into the hotel. Pierre is especially disturbed by this, because he remembers a woman with the same name and looks checking into the same hotel almost 40 years ago…

Well since murder is not a honeymoon deterrent, the couple head to Bruges anyway. They just so happen to walk down a street that was the location of the latest murder, and Stefan insists on watching them remove the corpse from the building- even hitting Valerie when she tries to pull him back.

After arriving back in Ostend, the couple are greeted by Elizabeth, who over drinks that night, tells them of her family history. The original Countess Bathory was a Hungarian ruler who tortured anywhere from 300 to 600 virgins before bathing in (and most of the time drinking) their blood. Of course Stefan knows all about the first Bathory, because he has slowly began to show some darkly sadistic behavior.

An inspector from Bruges shows up at the hotel, and is a little more than subtle in informing Elizabeth that he thinks she has something to do with the murders. Soon Stefan begins to grow more sadistic, and after a call from his "mother", he unleashes a fury of violence that pushed Valerie too far. This is when the sinister Countess sets her plan in motion, and even Valerie finds herself tangled in Elizabeth’s perverse world of death and eternal life.

Daughters of Darkness is probably one of the most popular titles in the Blue Underground catalog, and for good reason. It’s stylish, decently taboo breaking, and entertaining- but is does have some flaws. I personally love the film, so I’m going to go ahead and bitch about it before I praise it.

The single biggest issue I had was the scene transitions. About half the time, the screen just fades to red, then cross-fades out to the next scene. It’s a vampire movie, I get that they drink blood and it’s a red liquid, not please stop wasting 30 seconds of my time during every change of setting.

Another major problem, to me at least, was how they tried to downplay the name of Elizabeth Bathory. It goes to decently absurd lengths to make us question if she really is the countess or a descendant, but either way she’s obviously a damn vampire.

That would be like having a slasher set in a hospital, and Mr. Fred E. Kruger has just been admitted for third degree burns. Suddenly someone starts killing nurses with a bladed glove, but every time someone looks into Mr. Kruger’s room, he seems comatose. Then in a twist ending, he’s really Freddy Kruger. You’re not fooling me movie, and even if you do, it’s the same fucking conclusion either way.

Okay, now that I’ve made stupider jokes than Carrot Top, let’s get on with the things I enjoyed. The best thing about this film is the atmosphere, and without it you’d have nothing. There’s only around three scenes with blood in the entire film, and seeing as how one is from a shaving mishap, it’s really not for gorehounds. Plus, it’s not a sleazy film, which is a very impressive feat considering the subject of lesbianism and sadism.

Adding to the atmosphere is the setting. The sprawling hotel, the Belgian architecture, everything gives a perfect Gothic look. You can almost feel a sense of emptiness and despair in the hotel, which really makes you sympathetic to Valerie since she’s trapped inside with an abusive husband and a 350 year old vampire.

A couple of issues aside, it’s easy to see how Daughters of Darkness still has a cult following to this day. It’s a beautiful, stylish film that differs from exploitation and keeps it’s class. Not many films do this, and like I said earlier it’s got every component for a total sleaze fest, but it somehow manages to veer onto a different path. 8/10

PICTURE/ AUDIO– Seeing as how the film has been through three US DVD releases since 2000 (two of them from Blue Underground), I was really hoping this wasn’t a recycled transfer from the recent 2 disk edition put out a few years ago. Well I was right, because this 1080 widescreen transfer is easily the best quality to date. The blacks are a little strong in some places, but aside from some minor issues with the print everything looks fantastic. Rich colors, great flesh tones, and little to no noise. The only real issue I noticed was some scenes with elaborate lighting looked a little muggy, and I think it might have been from a little too much DNR… 8/10

The audio is a polished mono mix that is free of any major distortion and sounds great. Not much else to note except a French track (this is a dub since Daughters was filmed in English) and multiple subtitles. 9/10

BLU-RAY– Another solid BD setup, but again I have a few issues. The biggest is the Pop Up menu, which in this case is pretty much a "materialize at the top of the screen" menu. It functions well, but I’ve never been a fan of Blu-Rays that don’t have their Pop Up menu at the
bottom of the screen (but at least it’s not as distraction as some of the ones on Criterion disks). Only other issue is no mouse support, but that’s mainly just a problem to people like myself that need to watch the disk on a computer. Only other thing worth noting is the intro animation to the menu kinda make me feel like I’m about to walk into Hogwarts… 8/10

EXTRAS– This is as good as it is bad, because there’s some damn nice extras on this disk. The biggest is a second film in the vein of Daughters called The Blood Splattered Bride. It’s what I mean by just how easy it is to turn a plot like this into a sleazy movie, because, well, it’s pretty sleazy. Also comes with two commentaries (actor John Karlen and director Harry Kumel), an interview with Kumel, two featurettes with Actresses Danielle Ouimet and Andrea Rau (Valerie Ilona), the trailer, and some radio spots. The extras all come from the 2 disk edition DVD, but sadly this version has The Blood Splattered Bride trailer missing. That’s a damn shame, because it’s one of the craziest trailers of the 70’s, I really suggest people check it out sometime. 9/10