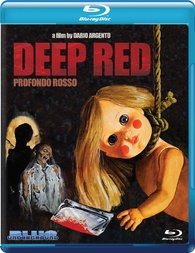 FILM– At a conference on Parapsychology in Rome, Helga Ulmann, a psychic, begins showing off her powers at a crowded conservatory. While her friend Dr. Giordani explains to the audience that Mrs. Ulmann could not possibly have any exposure to any of the members in the theater (since she just arrived in Rome from Germany), a horrifying vision strikes her.

She realizes there is a killer in the audience, claiming they have killed once already, and will undoubtedly kill again. She also sees an elegant villa, and hears a bizarre children song. During her outburst, someone from the audience walks out of the showing, only to return and listen to Helga talking to Giordani. She has figured out who the name of the killer is.

Helga settle in to her apartment for the night, and after jotting down a few notes on her vision, she calls home. During the phone call, she faintly hears the song from her vision earlier. Suddenly there is a knock at the door, and a maniac with a meat cleaver bursts in and begins chopping her to pieces.

Later that night, Jazz teacher Marcus Daly is headed home from the music department of the conservatory. He sees one of his band-mates, Carlo, drunk off his ass. The two begin to converse and joke, when a shrill scream pierces the air. Marcus begins to walk home, but as soon as he rounds the corner, he sees Mrs. Ulmann, bloodied, and banging frantically for help against her window. The attacker delivers one final blow, and Marcus rushes up to help her.

By the time he gets there the killer is gone, but in looking out the window he does see someone in a brown trench coat leaving the building in a hurry. Helga is obviously dead, and the police show up to look for evidence and hassle Marcus.

He explains he lives a few apartments away, and on his way home he saw the murder through the window and went rushing to help her. The inspector seems a little too sarcastic when listening to Marcus’s story, but everything changes when a reporter, Gianna, shows up at the scene. Marcus appears smitten by her, and the two team up to figure out who the killer was.

Marcus realizes something was different about the apartment after the police arrived, and he’s sure one of the paintings on the walls had been moved. Thinking this could be of significance, Marcus meets up with Dr. Giordani, who mentions a book about urban legends to him, thinking the villa Helga saw in her vision could possibly match one in local folklore. Marcus finds the book in the library, and he steals the picture of the villa (which now has the ghost story of ominous music and screams surrounding it).

Attempting to find the author of the book, Gianna gives Marcus her address. Little does he know that the killer has just paid a visit to the author, beating her in the head before scalding her to death in a bathtub of hot water. Upon this discovery, Marcus realizes the already-smartass inspector will not believe he stumbled on a corpse a second time.

He teams up with Gianna, and the two begin a search to find the villa from the book. After an odd lead based on the rare trees surrounding the mansion, Marcus heads to investigate. At first he only finds disturbing wall-doodles from a child hidden under a layer of plaster, but eventually he will discover the house holds the biggest clue to unraveling the mystery. And it’s hidden behind a bricked up wall in a forgotten room… With the killer offing everyone who could know anything, Marcus and Gianna race both the cops and the slasher to uncover the truth in time.

I would be a liar if I said I wasn’t buzzing with excitement when this disk landed in my mailbox. Blue Underground did such a great job with the Inferno release, and I could not wait to pop this baby in. I’m sure that after running this site for two years now, most of my readers know I have a huge man-crush on Dario Argento (my favorite director). Well, it’s finally time for me to dissect his masterpiece, Deep Red!

Before I go any further, I just need to mention this review is based on the 126 min. Italian cut, Profondo Rosso. "Deep Red" is the 105 min. English version. There’s not any gore missing from the English cut, but there is quite a bit of interesting exposition dialog absent. This version introduces Marcus earlier, goes more in-depth on characters like the inspector and Gianna, ect. This is the version you need to watch.

With that out of the way, Deep Red could possibly be one of the greatest Giallo ever made. I’m sure that almost everyone reading this has seen it at least once. so I’m pretty much preaching to the choir. The cinematography is stunning, the kills are brutal, yet reserved and realistic, and the settings, music, and pace is almost nightmarish.

I am American, so I did grow up watching slashers like Friday the 13th, Halloween, Madman, ect. The best thing about the Giallo films (at least in most cases) are the style of the killer. I love a deformed masked hick wielding a machete as much as the next guy, but the sleek, polished look of most Giallo killers is far superior and unsettling.

Fedora, brown leather trench coat, black leather gloves, and a hulking meat cleaver. That is the components for a fantastic killer, and Argento’s direction and camerawork makes this one into a sharp-dressed schizophrenic. This is my second favorite killer of any film, only topped by Blood and Black Lace.

Surprisingly, this movie was alot creepier than I remember. It’s been years since I watched it last, but I didn’t remember the scenes in the rotting villa being so unnerving. The scene where Marcus is peeling the plaster of the wall to look at the drawing (and the later scene involving peeling back a wall) had a very unnatural feel to them. I know that sounds stupid, but that house gave me the chills on this viewing.

I absolutely love Deep Red, and it is the staple of the sleek, classy Giallo films before they turned into the sleazy slashers years later (such at Torso and Sister of Ursula). There’s nothing wrong with those films, and they’re a fucking blast too, but the early Giallos just had a feel that didn’t follow.

Only complaint is that it ends like every other Giallo ever! If you can tell me one, just one, where the credits start 15 minutes after the killer is either exposed or killed, I’ll give you my kidney. As much as I love these films, every single one ends super abruptly within 5 minutes of offing the killer. But at least Deep Red has a cool still image during the credits.

A staple for the Italian slashers that followed, Argento’s Deep Red is a masterpiece by every definition. Dark, bloody, haunting, and sleek, it’s a film that hasn’t lost it’s impact in over three decades. And with the fully uncut version finally available, fans and first time watchers need to check it out. One of the best suspense films of all time. 10/10

PICTURE/ AUDIO– It’s often unavoidable to find an "uncut" film this old with a perfect transfer. Often the additional footage is a lesser quality than the "standard" footage, being both distracting and annoying. Aside from the fact this transfer is seamless, it looks perfect. No major damage, minimal grit, and only a handful of spots containing noise (natural noise is better than a picture raped by DNR any day). This is the way Profondo Rosso was meant to be seen. 10/10

The English version comes with 7.1 DTS-HD, 5.1 Dolby Digital Surround EX, and the original Mono tracks. The Italian version has the same mixes (in Italian obviously), but also has a part English part Italian track as well. The majority of the time I was watching with the 5.1 Italian, but just to see how good the subtitles were I did switch it to the English/Italian track a few times. The subtitles are more accurate than the English track. And when you have that many options, and they all showcase Goblin’s blasting soundtrack, you win. That simple. A great transfer with every option, Blue Underground has delivered yet another superb setup. 10/10

BLU-RAY– I’m just going to go ahead and say this is probably one of the coolest and most well designed Blus I have seen, but I was annoyed by one thing. There are two separate main menus for each version, and each have a different title card, but the same menu design after that. I would have preferred a different menu loop on each cut of the film, but this is a minor issue regardless. The design and menus work great, font is sized appropriately, and everything looks amazing. 9/10

EXTRAS– First there is an interview with Argento, co-writer Zapponi, and Goblin. This is a great featurette that will please any fan. The English and Italian trailers are also included (am I the only one who thinks the Italian trailer is just plain damn creepy?), and two music videos for the main song- one version by Goblin, and a tribute by Italian Prog Rock band Daemonia. My only complaint is the Goblin video is just a live recording of pretty much a jam session, and it does not sound too good. 8/10