The House by the Cemetery Blu-Ray Review 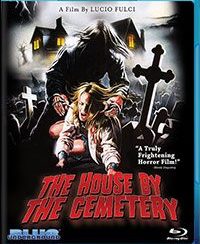 The Film– After a couple sneaks into an old New England mansion for some whoopee, the boyfriend mysteriously disappears. The girl begins to look for him, but the search is ended early when she finds him skewered to a door with his brains dripping out. A ghoulish hand appears from behind, and impales her skull with a kitchen knife.

Meanwhile in New York, the Boyle family is packing their bags to move into the old mansion. Norman, the father, has been hired to figure out why his co-worker and friend, Dr. Peterson, slaughtered his mistress and children before hanging himself (Lucio Fulci also pops in for a cameo as Norman’s boss here). The catch is, Peterson was staying in the mansion while doing research on suicide.

Norman, his wife Lucy, and their son Bob (the single most annoying child in any film ever) arrive in the odd new town. Norm and Lucy head into the real estate office to get the keys, but become nervous when the agent quickly rebuffs her assistant who called the mansion “The Freudstein place”, opting for the less ominous “Oak Mansion”.

Mae, a mysterious little girl who totes around a mangled doll, approaches Bob while his parents are inside, giving him cryptic warnings of the danger lurking inside the mansion. Mae isn’t exactly, um, sane- one such example being her hallucinating that a department store mannequins head falls off with blood spewing everywhere. When the Boyles return to head to “Oak Mansion”, the girl vanishes.

The first thing the family notices about their new house is the cemetery. Yep, a fairly large cemetery encompasses the whole estate. I have to pause here and just say that if you plan to live in a house planted in the dead-center of a corpse dump, I have no sympathy when, not if, some ghoulish monster kills you. Anyways while everyone is unpacking, the babysitter (more of a loiterer/additional victim, actually) Anne shows up.

Anne is an odd one to say the least. Other than her closely resembling the decapitated mannequin from Mae’s vision (foreshadowing FTW), the first night in the house she decides to rip down the boards restricting the cellar door. Norman doesn’t pay too much attention to these antics, because he’s too busy researching Peterson’s murder-suicide.

During his studies, Lucy begins to notice odd things about the house. Things like a tombstone being embedded in the fucking floor. Bob has more visits from Mae, who shows him a hidden grave marker bearing the name Mary Freudstein. Things get even weirder when Norman unearths a cassette recording of Peterson rambling on about a certain Dr. Freudstein doing the killings that drove him to suicide.

This Dr. Freudstein character was a turn of the century surgeon with a penchant for maiming his patients in the name or “research”. Realizing all too late that Peterson was right about Dr. Freudstein still being alive (making him over 150 years old), Norman rushes back to save his family. But that shuffling sound in the basement seems to be getting louder, and soon the family realizes the gruesome truth about Freudstein Mansion.

Possibly one of the most highly regarded films by Godfather of Gore Lucio Fulci, The House by the Cemetery has got to be one of his strangest films ever- and that’s not something many people would say nonchalantly. It’s a mix of genuine suspense, supernatural horror, and balls-out gore. Now while these mix well, the transitions between gore film and thriller can sometimes be a little too much. Before I proceed to bitch like crazy about certain aspects of this movie, I will say ahead of time that I really, really do enjoy it.

While the gore scenes are fantastic and very well done, about half the time they feel forced and excessive. Take an Argento thriller, like Deep Red, for instance. The murders are brutal and bloody, yet reserved enough to not take away from the overall feel of tension. The central mood of suspense and mystery is almost obliterated when someone gets killed in House, because it’s SO overdone.

One character’s throat is slashed over six times, resulting in an amazing scene of blood-spewing. Now the bad thing about this is it completely changes the feel of the film. Since there are only five or so murders shown on-screen, it feels like Fulci tired to over-compensate the low bodycount by going over the top and maiming the victims. This results in some of the most iconic gore of his career, but does remove the viewer from the film slightly. By the end it kinda feels like cinema whiplash.

The random sequences of ultraviolent killings breaking the flow of the film are easy to look past, but there is one aspect so atrocious, so wretched, so mind-breakingly nerve-wracking that you will want to cleanse your brain with a bullet after viewing- Bob. That little kid is the single most annoying child to ever be put on film. I’m kinda being unfair since I’m mainly bitching about the dubbing here, but this shit is unbearable. It’s an 8 year old kid with the voice of a 50 year old chain smoker.

You remember that “Mom! Mommy! Mama! Ma! Mum!” bit from Family Guy. Yeah well this kid does that for almost a solid hour and a half. The build-up to the climax is nothing but “Mommy! Mommy! Mommy! Mommy! I’m scared mommy! Help me mommy!” Is it wrong to say I would have just let that ghoul Freudstein snatch up the kid, that way I could have my sanity back?

Before I go all good cop with the film, there’s one more issue I have. Several movies have a scene just like this one, and unfortunately House by the Cemetery takes the bulk of my anger, but I always hate the “bat attack” scenes. Okay so the family ventures into the basement for the first time, and this bat comes outta fucking nowhere and latches onto Norman’s hand. A simple grab ‘n toss won’t suffice in getting it off, no no. Instead he decides to stab the bastard repeatedly with a pair of scissors until it just falls off dead. Why not just bash its fool rodent head into the door jamb until it expires of cranial trauma? How is that more inconveniencing?

Now even with these mind-altering flaws (well, Bob, actually), House by the Cemetery still is pretty awesome. Even though I was all whiney about the gore changing the mood, it’s incredibly graphic and well done. Brains hanging out, decapitations and a fireplace poker the jugular are some of the highlights. If you’re in it just for that legendary Fulci gore, then you’re going to be well rewarded.

Oddly enough, I really love what they don’t show more than anything. I’m talking about Dr. Freudstein, whose appearance is completely kept a secret until the last few minutes of the movie. I would avoid screenshots of this guy if every home video release didn’t spoil the shit out of how he looked, he’s that cool. Imagine if you took a zombie made of the pieces of many an individual, melted its face with a heat gun, and decked it out in a Mao jacket. This is one of the best looking abominations in any Fulci film.

It’s hard not to recommend House by the Cemetery, because it’s just awesome. Yeah there’s that one little cretin who sounds like I imagine Hell would, but the other flaws are mainly just annoyances really. The gore is great, the suspense is awesome, and the payoff is wacky and satisfying at the same time (if not slightly depressing, actually). This is a rare example of the parts equaling more than the sum.

The Package– The transfer Blue Underground has cranked out is nothing short of amazing. Rich colors, an absence of any damage whatsoever, and lack of DNR make this the best looking release of the film to date. I mean when you can see the details pop in a dusty, dimly lit basement you know you’ve done your job right.

Included are English and Italian 2.0 DTS-HD tracks and the original mono. I watched with the English track, and there’s nothing to complain about. A nice volume balance and total lack of distortions make this another (expected) superb job from Blue Underground. All I can say negative about it is I fucking hate Bob…

Another perfectly themed Blu-Ray menu, this time being modeled after a tombstone. Easy navigation, excellent pop-up, and an overall sleek look prove yet again that Blue Underground is the most innovative genre company releasing Blus.

For the Blu-Ray, Blue Underground has included six new featurettes and the deleted “bat attack aftermath” scene. The fearutettes are Meet the Boyles with Catriona MacColl and Paolo Malco, Children of the Night with Giovanni Frezza and Silvia Collatina, Tales of Laura Gittleson with Dagmar Lassander, My Time with Terror with Carlo De Mejo, A Haunted House Story with co-writers Dardano Sacchetti and Elisa Briganti, and To Build a Better Death Trap with cinematographer Sergio Salvati, make-up effects artist Maurizio Trani, special effects artist Gino De Rossi, and Giovanni De Nava. Carried over from the old DVD release are the trailers (the U.S trailer has to be one of the best examples of an English speaking narrator completely butchering all seriousness of a foreign film), T.V. spots, and gallery.