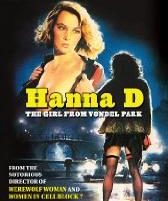 The Film– Hanna D tells the story of Hanna (I never saw that one coming), a young girl who lives with her verbally abusive glamor- whore mother. After her mother’s boyfriend leaves, she angrily throws Hanna out onto the streets. Now, she wasn’t exactly an angel before all of this, but the streets corrupt her in multiple ways. She starts out with a coke habit, which eventually leads to heroine.

I’ve seen myself some sleaze. No really, how many people do you know that have Tampon Tango? Wait, how many people do you know who even have a clue as to what Tampon Tango is? Point proven- I’ve seen myself some really rare, ultra sleazy films. With that boast (which would put anything Beowulf ever bragged about to shame, might I add) Hanna D just might be the sleaziest film on Severin’s catalog.

Sleaze isn’t always sex, or rape, or cannibalism, or trash, or… you get the idea. What makes this flick stand out is one thing- drug addiction. There’s some graphic close-ups of vagina and all the expected stuff that comes with the exploitation genre- but when you mix that with close-ups of real needle sharing, then it becomes something else entirely. You read that right, Hanna D has penetration- needle penetration.

I’m in no way afraid of needles. In fact, I give blood twice a year. Why the Hell am I talking about this, you ask? Last time I gave, the attendant missed my vein. Took five minutes of playing with the needle- in my skin- to hit the vein. A few seconds later, clot. The needle had to be pulled out, cleaned, and used again. Being the kinda person I am, watched every bit of this going on. There’s some scenes in Hanna D that I know for a fact, based on that experience, show real needles entering flesh. Skin just doesn’t move like that on it’s own.

This film relies entirety on sleaze, even mixing the sex AND the drug nastiness together. I have yet to see another movie where a heroine and acid cocktail is pulled from the asshole of a girl who managed smuggled it inside prison. On top of all this, the lead actress, Ann-Gisel Glass, looks about 16. She was actually 20 at the time of filming, but this beauty looks MUCH younger, making some scenes very uncomfortable.

Hanna D: The Girl from Vondel Park is what you get if you put about 20 exploitation films in a blender and hit purée. Enough glorious close-ups of sex and drug use to bump Severin’s notorious Sinful Dwarf out of the top sleaze-slot. and reign supreme as their trashiest release to date. Think of it as Requiem for a Dream mixed with soft-core 70’s skin flicks. If that concept, Requiem for a Wet Dream, sounds appealing to you, then check out this amazing, super trashy flick!

The Package– It’s my job to critisize, but there’s not much to nit-pick about this transfer. Aside from bitching about some scenes looking soft or over-saturated (and the obvious print damage in some places, which is expected), this is a solid transfer. Severin has kept us waiting on this title for quite some time now, and this transfer proves out wait was not in vain.

The audio is a nice 2.0 English dub, and sounds crystal clear. Not a single distortion or bug on the track, but my 5.1 system seemed to make the volume extremely low. I put the disk in my computer and it sounded fine, so I’m willing to bet that problem was my system. Bottom line, this is a mighty fine audio transfer that my system couldn’t let me fully enjoy. I love Sony.

Severin included the trailer, which is always worth points with me, and an interview with director Rino Di Silvestro. When I got the press release for this title, the interview was something I was really looking forward to. The eccentric nature of Rino, and his insisting on Severin shooting an interview with him twice really made me respect the man. He didn’t do dozens of trash films for money or attention- Hanna D was his baby, and he really cared for this movie. It’s a shame he passed recently, we’ll miss you Rino! I’m really glad Severin could include the interview he wanted to give on this disk, and you can tell he really enjoyed talking about his movie.