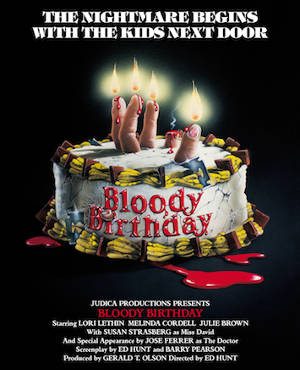 The Film– In 1970, three children were born during a total eclipse. On this particular night, Saturn was obstructed from the Earth. Astrologists believe this is the planet that controls emotions, so these three children, two boys and a girl, were born without any conscience, remorse, or kindness.

Ten years later, with their birthday only a few days away, a high school couple sneaked off to an open grave in the cemetery to fuck around. Why this seemed like a good idea I have no clue, but the three hell spawns strangle them to death with a jump rope.

High school student Joyce is doing her thesis on astrology. She’s been mapping out the charts of the students in her little brother, Timmy’s, elementary class. When they arrive today, they’re greeted by Sheriff Brody. He found a jump rope handle in the open grave last night (the same one also containing two corpses), and has a hunch one of the children might have seen something.

Our devil children are revealed to be Stephen, a towheaded, quiet boy- Curtis, an outgoing kid who’s the homicidal equivalent to Ralphie from Christmas Story- and Beverly, who looks a little too much like Alice, Sweet Alice for it to be coincidence. Also, Beverly’s father is the sheriff… Yeah he’s about to die soon, right?

Well Beverly’s designed the ultimate money racket. She has a peep hole in her closet that looks into her sister’s room, and she charges the neighborhood boys 25 cents to watch her big sis undress. After Curtis and Stephen get their eye full, she decides it’s time to get daddy out of the picture.

Beverly sets up a skateboard on the stairs to trip Sherriff Brody, but when he walks over to see his daughter, he steps right over it. Unlucky for him, she drops the jump rope they used to kill the couple with. When he kneels down, Curtis and Stephen jump out and bash his fool head in with a fucking baseball bat! I honestly didn’t see that shit coming.

With the Sheriff out of the way, Curtis steals his gun. Now that the evil children have a revolver, more bodies start to pile up- including the kids teacher. The police believe it’s the same person doing the killings (because strangulation and shooting could easily give you that impression, right? These profilers must have been the same guys on the Henry Lee Lucas case).

Joyce and Tommy (epically Tommy, since he saw the trio positioning the Sheriff on the stairs to make it look like an accident) eventually become the main target of the killer kids, but no one wants to believe they’re evil. Joyce uneasily accepts to babysit Beverly one night (she thinks it’s all Curtis and Stephen), and when she and Tommy arrive at the Brody residence, the pint-sized psychopaths unleash hell!

The killer children theme is something extremely taboo, but somehow pretty popular. There’s everything from sleazy examples like Beware! Children at Play and The Children, to sophisticated action thrillers like Who Can Kill a Child? and Ils. To people who have a strong knowledge about horror, evil kiddos are nothing new.

But, what makes Bloody Birthday so different? Well, aside from the fact that it’s actually good, it was also mis-marketed as shit. Almost everyone considers this a slasher film, when in all honesty this is NOT even close to being a slasher! Slasher killers don’t use a Smith and Wesson revolver, people! That’s just common sense.

I’ve learned not to get upset about a film being wrongly classified.

The horror genre is easily one of the most complex in terms of sub-genres and films in general, so it’s only natural that some movies would get labeled as something they’re not. I’m a huge fan of director Ed Hunt’s final film The Brain (which needs a DVD release bad!), and since I had not seen Bloody Birthday, I was able to drop all expectations and just enjoy it for what it was.

So, now that I’ve bitch like a schoolgirl, on to the film. It’s actually a pretty shocking movie- not in the way of having epic gore, but it’s just shockingly violent. When the kids, who keep in mind are 10 years old, beat a man to death with a baseball bat, that’s pretty harsh. And his daughter was the one who orchestrated it (even more shocking, that’s not the only person in her family she kills)!

Before I get into what I really like, there are a few things I found totally stupid. A good, funny stupid- but still undeniably stupid. The first is a scene where Curtis and Stephen hotwire a junked car and chase Joyce in it. I’m pretty sure most cars in scrap yards will require more than just alligator clips ad 10 gauge wires to repair.

The second, and probably the most ridiculous thing about the entire flick, is that Beverly has a fucking archery bow in her closet. And she actually uses it to kill people! I’m not talking about some DIY bow that she’s made or something- no, some dumb ass motherfucker actually went out and bought a 10 year old a goddamn hunting grade bow with broadhead arrows! Who the fuck does that?

Even with those idiotic flaws, Bloody Birthday is one hell of a fun movie. Curtis really steals the show (Stephen doesn’t really do anything, and Beverly is just annoying) every time he’s on screen.

I wouldn’t doubt if this kid grew up with some homicidal tendencies, because he acts so damn gleeful to be killing. There’s even one scene where he goes all Travis Bickle and practices his “gun in hand murder face” in the mirror.

With the countless masked maniacs in horror films around the time of filming, you can tell they did try to compensate a bit. In the already mentioned Junkyard car chase, Stephen is wearing a blanket over his head with two eye holes cut out. It’s not a significant or striking scene, but it’s definitely one of the biggest WTF moments of the film.

Bloody Birthday is not a slasher, nor is it original- but it’s fun. The shocking brutality of these kids is up there with the hooligans from Devil Times Five, and the absolutely sinister Curtis, combined with some really odd and unintentionally humorous scenes, makes Bloody Birthday worth a watch for any 80’s horror fan.

The Package– Considering the age, Bloody Birthday actually doesn’t look too bad- until the scene gets dark. There a consistent, minimal layer of noise during the entire film- but when it’s night, you can barely see a damn thing. Aside from some very rough looking places, this is an average transfer for a film of its age.

Here’s possibly the worst aspect of the entire disk. The first third of the film has a muffled, crackling audio track, and it’s so damn annoying. I spent about 15 minutes trying to find the right volume to listen at, because too low and you couldn’t hear shit, and too high would cause your speakers to become very angry and make those not-very-fun popping noises. Eventually I just gave up, and around the 30 minute mark it seemed to level out. This isn’t the result of a shitty transfer, just age. It’s annoying at first, but eventually does get much, much better.

Severin has included two interviews, the first being Don’t Eat That Cake, an interview with Lori Lethin (Joyce); the second is an audio Interview with Ed Hunt. There’s also a featurette, A Brief History of Slasher Films with Going to Pieces author Adam Rockoff. Here’s my problem, THIS IS NOT A SLASHER MOVIE! Apparently this featurette is on the Nightmares disk as well. I’m always really, really critical of “experts” in the horror genre, and this was no exception. I lost interest as soon as he mentioned that Night After Halloween was a slasher. Anyone else seen that movie? There’s like two murders, and if I remember correctly they’re both accidental. Rockoff does know what he’s talking about (at least more than most people), but in this interview it seems like he’s just title dropping (there are multiple non-slashers included on his list) retro horrors instead of actually mentioning genuine, obscure slashers. Severin has also added a few trailers for their retro and slasher-esque titles.