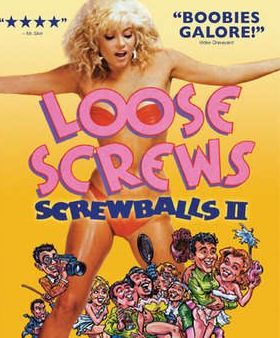 The Film– It’s the final day before summer vacation. Every student at Beaver High (sadly not T&A High from the first movie) is preparing for their sacred summer vacation, but four unlucky oddballs are held back after the three o’clock freedom bell. Since they’re the worst students in the school, the principal gives them one last chance to graduate- summer school at Coxwell Academy.

After typical 80’s highway tomfoolery (like shirt swapping with girls along the road), the boys end up at Coxwell Academy. Since they’re the first to get there, what better a chance to convince all the arriving girls to undergo a breast exam? After donning the white smocks for some stealthy hand fulls of their classmates, the gang ends up ruining their faux exam when a surgical dummy freaks the girls out. It’s here that they run into their personal Lucifer, Principal Arsenault.

Loose Screws is a really funny, but dumb movie. I really enjoyed it, but let’s get the bad out of the way first. Essentially, this is Screwballs set in summer school. A group of guys (the exact same setup from Screwballs, fatty, nerd, too cool, Mr. Suave, ect.) It’s got most of the hi jinx, like the fake boob exam, and a strikingly similar plot (attain the unattainable girl). Pretty much, Loose Screws feels like the material from Screwballs that ended up on the cutting room floor, with some new characters and a few bits from the old film.

Now, with that aside, Loose Screws is pretty damn funny. If you remember in the Screwballs review, I said I never really understood the charm of 80’s comedies. I kinda understand them now, because they’re just like slasher movies. You’ve seen one machete murder, one axe to the face, you’ve seen them all- but you keep watching the exact same thing done over and over again in a different movie. So with that said, yes, Loose Screws is as funny as Screwballs; however, I won’t go as far as to say it’s funnier.

There’s way more skin in this outing, but just like the comedy, it’s still not Screwballs. You’re going to enjoy it, you’re going to laugh, and everything works just like it should, but you’re going to be reminded these are not the same kids from the first film that everyone loved. I really don’t understand why they changed the characters, because like I said they’re exactly the same. Just pop it in, imagine you’re still at T&A High, and make the lulz an these poor bastards attempts to get to first base.

The Package– Severin has cleaned this film up into something that looks great. The picture isn’t too soft, and there is little to no damage on the print. There’s a second "International Version" on the disk that looks like a VHS rip, but the main transfer is superb.

The audio is clear and balanced, with the soundtrack and effects properly mixed with the dialog. Speaking of the soundtrack, I want a copy dammit! The music is funny as hell, epically the condom song (no joke, it’s an 80’s pop song about having a jimmy in your wallet).

Severin has included two interviews, one with the production manager and the other with the producer, and the already mentioned "International Version", which runs 88 minutes as opposed to the 92 minute uncut version. It’s nice to see that Severin included both cuts of the film, so the people who grew up watching these films will be satisfied. This is easily the definitive release of Loose Screws!