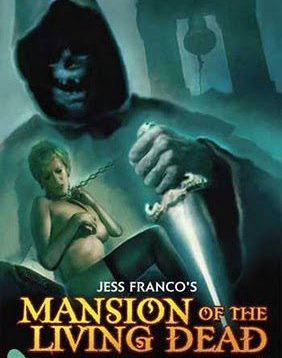 The Film– Four female tourists take a vacation to a Spanish island. Upon arrival, they realize they are the only people there, and assume "that everyone else must be on the beach" (which is the most repeated line in the movie). Turns out the only people on the beach are the crazy gardener, and a cleaver throwing maniac (aka the hotel owner). After some investigating (and plenty of softcore lesbian sex), they discover the hotel owner’s dark secret- his wife, chained up in one the rooms! She explains that the island was a bastion during the Inquisition, and many lost souls still remain. Maybe that’s why people who explore the old "mansion" down by the ocean never return…

First off, it’s not a mansion. It’s at best a flat, and a damn small one. With a title like this, I a want Biltmore House mansion. I’ll admit, as a sexploitation flick, this works. It’s got the right amount of comedy (intentional and unintentional), some entertaining characters, and some dumb looking zombies. Also, there’s enough tongue action in this film to make the PR at Alpo sweat bullets. This is really the best part of the movie, because since they can’t show hardcore oral sex, you get extended scenes of hot, passionate thigh licking. If you don’t enjoy the softcore, then you’ll hate this movie, because there’s like 10 minutes of zombies; and half of that is just them standing still. That let me down, because I’m a huge Blind Dead fan, and this Franco homage just didn’t have enough pizzazz. Despite the lackluster plot and the unseen undead, I somehow enjoyed this. Don’t ask me how, but I never had the urge to fast forward once. Maybe the stupidity of the movie is what hooked me. In Franco’s realm of so-bad-it’s-good, Mansion of the Living Dead takes its place beside Devil Hunter and Oasis of the Zombies.

The Package– No matter how impressive or how rank, Severin treats every film like gold. This transfer is amazing; much better than I expected. No print damage, minimal grit and grain, nice color balance; you name it and it looks great! Flesh tones? Of course!

The audio was nice, but still liked to fade in and out. The Spanish dub with optional (and error-free) subs works well for the film and looks nice. Like I said, the most repeated line in the film is "everyone must be at the beach", so if you want an English dub, just record that sentence and replay it for the duration of the movie.

Extras consist of an interview- The Mansion Jess Built. Franco and his wife/ star of the film Lina Romay give a 19 minute interview on the zombie genre. What Franco has to say is always entertaining and fun to listen to, but I really, really wanted the trailer too. Regardless, this is a fun way to end a kinda fun movie.