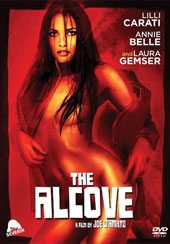 The Film– Alessandra is the wife of a highly decorated soldier in the Itilian army, Elio. While her husband has been away in Africa (1940’s imperialism at it’s worst here people), she’s taken a interest in his secretary, Wilma. This lesbian love affair is broken apart when Elio returns (played by Eurocult maverick Al Cliver, who happens to look like a lovechild between Matt Damon and Nick Nolte in this outing). His return is not the issue, it’s what he’s brought back with him- an enslaved African princess.

The princess (always beautiful Laura Gemser), Zerbal, was awarded to Elio for rescuing her father, the chief of his tribe, from an invading army. The household uses Zerbal to do medial tasks, such as washing dishes. Things begin to fall apart soon after Alessandra finds out how good a lover Zerbal is. This displeases Wilma, who now is having an affair with the son of her employer. The whole situation comes to an explosive conflict when Elio buys a film camera and plans on using the trio of beauties to star in his own homemade stag films, but not everything works out as planned.

That’s not to say that The Alcove skimps on the sleaze. There’s not many scenes that don’t have some lezzie love, and there’s even some vintage smut show in a few scenes. When there’s not skin being shown, there’s tons of racial banter. Tons of imperialistic talk about the killing of Africans and the such. One thing I really loved was Elio writing a book on his African exploits. I’m about 99% sure this is a nod to Joseph Conrad’s Heart of Darkness, which is without a doubt one of the best novellas ever written.

The Alcove is an unusual film. When it wants to be political and artistic, it is; however when it wants to be filthy and sleazy, it does that too. The ending was stupidly bland in my opinion, but with films like this, the ending is just a way of saying "it’s over, put your pants back on". Don’t expect "Emanuelle in the Slavers Villa", rather a very sophisticated form of sleaze and art.

The Package– Severin’s transfer is amazing, pure and crystalline. Sorry I couldn’t resist the Heart of Darkness/ Apocalypse Now reference. Nevermind… The transfer is super clear, and only a few scenes had any grit (I’ve heard people complain about heavy damage, but I only saw it in one super bright scene and it wasn’t bad at all in my opinion, maybe I’m just going blind). There is one point where an ugly, urine tinted line appears on the print, but it’s nothing severe and it’s gone before you even have time to bitch about it. I’m willing to say this could have been used on a Blu, it’s that damn good.

The audio does have some volume issues, but it’s not a huge hassle. I didn’t notice any pops or cracks, and most of the dialog (English dub) was clear and undamaged. Some of the screams sounded too loud or too soft, depending on the scene, but that’s just nitpicking.

There’s the US trailer, which always gives you a few more points with me. The only other extra is Talking Dirty With Joe D’Amato, an interview shot in the 90’s before his death. Joe is an interesting character, and with this being one of his last interviews, it’s interesting to say the least. The Severin staple is quality over quantity, and this release is of good quality.