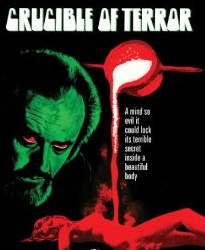 FILM– Reclusive artist Victor Clare begins the madness by encasing a woman in plaster, then fills the mold with molten bronze… while she’s still alive. The resulting statue, as well as a few paintings, are stolen from Victor by his son, Michael, who sells them at an art show with his business partner John. John is the brains of the operation, and when his backer visits to see if things are running smoothly, he becomes viciously assertive in wanting to buy the statue.

After finding out it’s already been sold, he storms off. The art dealers realize that Victor’s work is their biggest money maker, so they decide to bring along their girlfriends and head over to the Clare house to try to buy some more art. Michael warns John that his father is an odd, possible evil man, but John insists he must have more art for the show. After everyone leaves, the backer returns to steal the sculpture; however, things really don’t work out too good for him, and since he was supposed to be headed to Germany, people don’t realize he’s missing.

John, Michael, and their two girlfriends arrive at the Clare household. Victor has been told John wants to buy his paintings, but he already knows his son has stolen some of his work. He’s a harsh, cruel man who’s emotionally abused his wife to a point where she’s reverted into a second childhood. The couple live with Victor’s friend and his live in model on an old tin mine (which Victor has turned into his forge). The entire house is happy to have guests, even Victor seems pleased they showed up- epically the girls.

At lights out, Michael and his girlfriend get into a tiff and she storms to Victor, asking to pose for him as a way of getting back at Michael. Of course the artist can’t resist a beautiful woman, and after he leaves to let her get dresses, a killer wearing a pair of welding gloves slaughters her. Things aren’t going well for John’s girlfriend either. Millie has been having vivid dreams and thoughts involving a masked Japanese thing, and she desperately wants to leave. Victor corners the two men, degrading his son and telling John he will only sell to him today. He wants 2,000 Pounds for his work, so John leaves on a mad dash to come up with that kind of change.

While he’s gone, everything goes to hell at the Clare residence. Victor begins to harass Millie about posing for him, his wife’s mental state begins to get worse, and, for some reason, he begins to heat the forge. While Victor’s busy thinking about his art, the killer begins to stalk the rest of the house. Millie flees into the caves of the tin mine, but goes the wrong way and stumbles into the forge. After doing some questionable things with his backer’s wife, John eventually gets the money. He arrives just in time to witness the final horror that takes place in the forge- and it’s not something anyone will see coming.

Crucible of Terror is just a damn good movie. It’s pretty much a mash up of all the great things about foreign horror. The setting and the characters are overtly British (no shit, huh?), but when everything is on screen is has a very Pete Walker-ish charm to it that’s distinct to non Hammer horror films from the UK. What’s also great is that is has plenty of Hammeresque vibes thrown in as well, so British horror fanatics will absolutely go crazy with this one.

This was not something I expected- it has a Giallo inspired killer. Instead of camera following a sleek, black leather glove around, it’s a rugged welding glove. While some films like Torso don’t have a killer with the elegance of, say, Deep Red, I’ve never seen an industrial Gialli. Maybe it’s just me (maybe it’s because I grew up around heavy machines and learned to love stuff like welders), but the killer is awesome. Also, Victor’s forge looks like it was wired by a graduate of The Argento School of Lighting. It just oozes those deep, rich colors that seem unnatural, especially red. It even glows through the windows in the house, almost completely turning the last half of the film into a surreal Italian slasher.

That almost I just mentioned is because the last half also has some other influences. I don’t really want to get too in depth and spoil a thing, but let’s just say this movie was able to see the future of Eastern horror. There’s honestly not much as far as cinematics go, but the entire climax is like a glimpse into the future of Asian horror. Since Victor was played by the occultist Mike Raven, maybe it’s not a coincidence after all…

Crucible of Terror really offers more diversity in one sitting than most "horror movie montages" you can find on YouTube. It’s able to balance every element it uses to create a damn near perfect horror film. It’s not too bloody, it’s not too trashy, and it has a great (if not a little too abrupt) ending. If you’ve ever enjoyed a horror film other than American slashers like Halloween, then you’re going to be digging at your T.V. wanting more. 9/10.

PICTURE/ AUDIO– While no where near spotless, this transfer is really good. Seeing as how Severin used an uncut 35mm print, there’s a heavy coat of grain and scratches through the entire film, but the contrast and colors look amazing. While it has a few hiccups like cigarette burns and large damage patches here and there, overall this anamorphic transfer delivers. 8/10

While the audio mix is good, there’s a few times where it freaks out and bogs down. For the most part, the volume is balanced, the soundtrack is not overpowering, and the dialog is nice and clear- but when it decides to flip its shit it really sounds weird. Again this is part of dealing with a film almost 40 years old, and Severin’s restoration is way above average. 7/10.

EXTRAS– Jack shit. Sadly not even the trailer, but don’t let that stop you from picking up this fantastic film. 0/10.