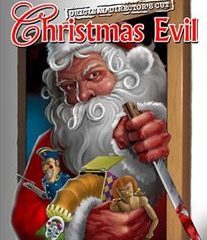 FILM– Back in 1947, Harry and his brother Philip witnessed Santa delivering presents to their house. Of course it was their dad in a costume, but little Harry believed it honestly was the Claus. When Philip nodded off, he crept back to see if Santa is still in the house. Unfortunately for humanity, dad was giving his wife some thigh worship, and seeing his mother getting felt up by Santa made Harry snap. He ran up stairs and began to cut himself with a broken snow globe.

In the present day (aka 1980), Harry is a Santa obsessed nutjob who’s working for the Jolly Dreams toy factory. Santa pajamas, Santa statues, Santa masks and pictures- even when he lathers his face to shave, he sculpts a beard in the cream. He’s miserable at work because of a promotion, which despite the better pay, keeps Harry from actually assembling the toys on the line.

After spying on the neighborhood children with binoculars to check for bad behavior, he sees one boy cutting out a centerfold from a nudie mag. This "bad" (but perfectly psychologically healthy) behavior, combined with asshole co-workers finally pushes Harry to the limit. After filling in for an assembly line worker, only to see him boozing it up in a bar on the walk home, Harry decides to become the ultimate judge of naughty- St. Nick.

Despite being a mega lurker and stalking the naughty kids, as well as his own brother’s family, Harry keeps his cool and begins to create the perfect Santa suit. He works from Thanksgiving until Christmas Eve nonstop to complete his costume, and even paints a sled on the side of his van. While all the employees are distracted by a Christmas party, Harry steals all the toys from Jolly Dreams, dons his red velvet garb, and sets out to bring holiday cheer.

While the first few houses go well, eventually some hipster dickheads decides to hassle Harry. In a split second, Santa draws his festive hatchet, and chops them to bits on the steps of a church. After a few more deliveries and murders, Harry seems content with his Christmas Eve romp (despite some slight depression from not being able to slide down chimneys).

Now that Christmas morning is here, all the witnesses from the church are looking for the killer Santa. Harry’s suit has gray fur trim, and since the cheap store bought costumes have white, he’s not too hard to miss. While out delivering the last of his gifts to the good children, the congregation notice his suit, and they decide to handle the situation in a civil manner- a torch mob. With everyone , including his own brother, furious or terrified at his Christmas activities, Harry begins to loose what little grip he has left on reality.

Story time. I remember renting this movie when I was a kid back in the 90’s and I absolutely fucking hated it. The store I rented VHS from always put the Christmas horror movies on the same shelf as the "authentic" holiday films. My Christmas ritual was to rent Silent Night, Deadly Night and Ernest Saves Christmas. I used to have a very shallow life.

Anyhow, one year Silent Night was checked out, and I noticed Christmas Evil (under the title Terror in Toyland). The covers were very similar, because both were big boxes with an axe wielding Santa plastered on the front. I snagged the tape, went home, and became so bored I fell asleep. If you’re a child and you actually fall asleep on Christmas Eve before midnight, something is very, very wrong.

The point I’m trying to illustrate is Christmas Evil is almost the exact opposite of Silent Night, Deadly Night. It’s not a slasher in the least. It’s about a mentally unstable man with a shitty life who tries to do something good, but to no avail. Despite the similar idea of a killer Santa, these two movies have nothing in common. Now, I can barely get through Silent Night, and I love Christmas Evil- because it actually has substance and is more than topless girls being hacked to bits.

The film is really dark and depressing. Everything in Harry’s life is a mess all because of that one incident as a child. He is a character that pulls tons of sympathy, and the fact he’s surrounded by total assholes makes him that much more likable. It’s almost like this is the childhood he never had. Free toys and actions have no consequences, what kid wouldn’t love that?

As for the little bit of blood the movie has, it’s simple slashings and a little bit of splatter. No gore and no tits. Instead, we see Harry’s life fall apart. In a bizarre and seemingly innocent delusion, he realizes that no one wants him. It’s a downer of a movie, and has one of the most brilliant and depressing endings of any movie I can think of. It’s going to bore quite a bit of people with the lack of gore and slow pace, but if you want to see a movie that’s almost hurtful to watch, this is easily one. Oh by the way please ignore the horrible alternate title puns I used earlier. But I must say it’s nothing compared to the ones in the movie ("Santa’s hit list? You mean GIFT list"). Merry (insert religious holiday of choice) you fucks. 8/10.

PICTURE/ AUDIO– Aside from a moderate bit of grain and damage, the picture looks great; however there’s a few scenes that are a little too bright, and it causes them to almost look like stock footage. I assume this is because the shots with bright lighting show the print damage better (most of the movie is dark), but it just looks weird. It’s not a big issue, and the overall transfer is pretty good. 7/10.

Aside from a few places where the dialog is muffled, the audio track sounds nice. Well balanced, good volume, and for the most part, clear and distortion free. 8/10.

EXTRAS– Synapse has included 26 minutes of audition tape footage, storyboards for three scenes (one of which was deleted), deleted scenes, and a gallery of comment cards from the original screening. These are really fun to read, and range from "excellent" to "walked out". There’s also a director’s commentary, and an additional track with both the director and John Waters (this is his favorite Christmas movie). That’s just plain damn amazing. 8/10.