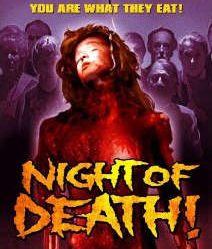 The Film– Deadlock House, a secluded French retirement home for the privileged few. There’s only a handful of requirements to be accepted; one, you must be health conscious- two, you must stay on the grounds at all times- three, you must enjoy the taste of human flesh- four, you must want to live for over 1,000 years- and five, the current in-house caretaker will only be there for a two months, so you must never get attached to her…

Martine has just accepted the opening as caretaker at Deadlock. Currently residing with her are the are the elderly residents, the ominous groundskeeper Jules, the calorie counting director Helene, and the current caretaker, Nicole.

Once you are an employee, you must "bond with the residents", meaning you must not leave the grounds for two months. Since Martine arrives a day early, she is given the night off. As soon as she leaves to enjoy her last night of freedom, Nicole suddenly is "fired"… And when you’re fired at Deadlock, it takes alot out of you, namely the heart, lungs, spleen, ect.

As Martine’s two month curfew begins to draw near, the local mail boy asks her on a date. With freedom on her mind, she begins to realize a few things. The residents congregate in a group around the halls at night, the director won a beauty pageant over 100 years ago, there’s a secret room behind the cupped in the kitchen, and parts of Nicole’s suitcase are in the ash pit.

With a serial killer lurking around the near by countryside (The Golden Needle Killer), and the increasingly bizarre behavior of everyone she lives with, Martine begins to look for answers. What she finds is the residents have a secret diet that keeps them youthful, and it involves human flesh. She also finds Nicole. Yep, that’s right, Nicole never left Deadlock House. She’s been hanging around all this time… in a meat locker…

Night of Death! is one of those obscure French horrors like Ogroff and The Invisible Dead (God bless the VHS). I had no clue it existed until Synapse sent it to me, and from the cover I assumed I was about to watch some zombie flick. As it turns out, Night of Death! is a very, very creepy movie about old people wanting to punch Death in the face.. via cannibalism.

There’s something about the characters in this movie. Movies with tons of people tend to leave out the character development (just look at Inglourious Basterds…), but every person in this movie has a unique personality. Jules, the groundskeeper (who looks and acts like an elongated Olaf from The Sinful Dwarf) is a mega creeper. The residents all have different attitudes toward Martine, and the director is an eccentric nutjob. When it comes to acting, this movie nails it.

So, form the cover I bet you’re thinking this movie is gory as hell, right? Nope. Wrong. The gore only happens during about four scenes, and three are at the end of the movie. What it relies on instead of bloodnguts is a damn creepy atmosphere mixed with absurd humor. The group walking the halls at night is as funny as it is creepy. Your mind processes "killer old peeps, really?", but the mood tells you there’s something very unstable about them (even after you know how they get rid of wrinkles).

Some parts that are supposed to be funny (like a dinner date with a life sized doll) are actually unnerving. Night of Death! is able to creep you out, which is not something many movies do well. And even with a lack of ultra-gore, the movie is still highly entertaining. Plus the ending to this movie is great, something that will really catch you off guard!

The Package– For a film very few people knew about, Synapse has went overboard on the transfer. At its best it looks like something shot a few years back, and at its worst it looks like perfect quality VHS (no clue how to describe it any other way). Sure there’s the damage here and there, but as far as overall quality, this is top notch.

The audio is the original French track with English subs. The subs are perfect, and the audio is distortion free. It is kinda loud when the soundtrack takes over, but would you rather have something a little too loud, or a little too quiet?

Not a damn extra in site, which is expected but still kind of a let down. With a movie this obscure pretty much everything worth including as extras is long gone. I can’t even find a trailer for this movie online, and what Synapse has done should not be held back for a lack of things that do not exist.