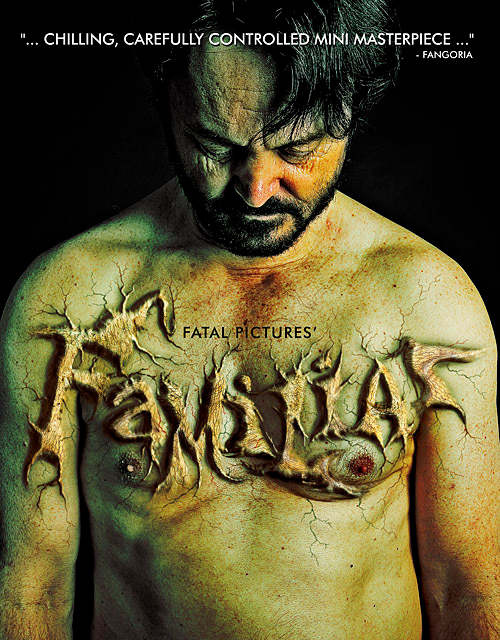 FILM- John Dodd (who may or may not be in some way related to the main character from an earlier Fatal Pictures film, WORM) has begun to hate his life. Well, let me rephrase that- he’s begun to hate everyone in his life. His wife, daughter, and everyone else around him almost gag him with revulsion and disgust. Then one day his wife drops a bomb in his lap.

Since their teenage daughter is about to graduate high school, his only hope was waiting for her to go to college and move out. That’s when he would make his own great escape from his wife, and after existing for almost 50 years could finally start “living”. After planning this fantastic execution of his current life, his wife comes to him one day with a little secret. She’s pregnant.

Since this child would do nothing but hamper his attempts at abandonment, John decides to go a little “back alley”, shall we say. As he slowly begins the steps to induce a miscarriage, his mental health rapidly deteriorates. What began as simple annoyances has evolved into a seething hatred for his wife and daughter. But are these thoughts really John’s, or do they belong to some sentient force living in the massive tumor that has appeared on his body.

Familiar is the third (and to my knowledge longest) sort by Canadian based Fatal Pictures. Their work came to my attention with the mentally torturing WORM last year (which never got a review thanks to the screener deciding to stop working, but it’s seriously one of the most powerful shorts I’ve seen in a long time), and when given the chance to check out Familiar, I happily accepted.

I don’t think I’ve seen such a perfectly crafted horror short in almost half a decade. The acting, the script, the cinematography, the effects, the pacing- every single fucking thing comes together in a way that is almost unnaturally perfect. Believe me, I’ve seen some awful shorts over the years, and you’d be amazed how easy it is to turn a 20 minute film into a lobotomy session for the audience. It takes skill to show a compelling story in that amount of time.

The performance by Robert Nolan as John Dodd is haunting. There’s nothing good in his voice at all. No love, no compassion, nada. There’s not even much hatred until some of the more strenuous events begin to unfold; just this small, almost unnoticeable tinge of disgust. And up a certain pivotal point, you don’t know if there is really some force causing these thoughts, or if he really does feel this way.

The idea of using a growth of some kind is great. The malignant growth makes for malignant thoughts, and it really gives a sense of characterization to his dialog. The tumor is as ugly and unnatural as the way John thinks about his family, and when everything is said and done, well, let’s just say I’m willing to bet no one will guess how this baby ends. I’m so impressed with the “twist”, the climax of this short, that if anyone successfully guesses it I will personally fly to your house and allow you to dissect me and sell the parts to black market organ dealers (contact info will be included on my cell phone; I usually keep them on speed dial anyways). I’m that confidant no one will see this coming.

I really can’t say much else without spoiling something, and I’ll be goddamned if I’m going to treat this the way Ebert treated James Gunn’s Super. It’s a bleak, hateful story that slowly unwinds into a grotesque nightmare (and just might cause some sympathy, actually). The compact runtime makes this a to-the-point ride, so there isn’t a single justifiable reason not to see this if you have the chance. Fatal Pictures have released their best film to date, and if they’re making films this good at one fifth the length of a feature, I can only wait patiently until their next release. 9/10