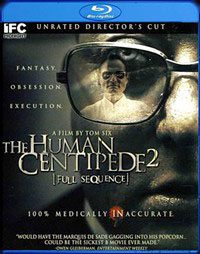 FILM– Very rarely does a film force me to break my usual review style. The basic ritual I use is a plot summary, followed by my opinions on the movie. Any time I have to attack something differently means it’s not a typical film. It usually stands out as something not only different from the genre, but something entirely unique from any perspective. This is one of those occasions.

First of all I have to say I have never seen The Human Centipede. Yeah I know, sham on me, but I have my reasons. The first being that I’m so swamped with things to review that unless its sent to me, with the exception of a few movies I catch on Showtime or in theatres, I don’t have time.But the biggest reason was that when someone walked up to me and calls a movie "the sickest thing ever", there is no way in hell I believe them- especially when it involves ass to mouth. Unless it has about 10 AVN awards, I’m not watching it. I knew as soon as I saw the "I’m sowwy I haz to shiiiiiiizzzzz" scene online that it wasn’t for me.

Then I saw the trailer for part two, and instantly lost my disposition. I could tell it would be different and decided to give it a try. And holy shit is it different. Instead of just a continuation of the story, it creates a whole new reality. Instead of a cliché evil German doctor, the psychopath this time is Martin, a mousy security guard who works in a London parking garage.

Instead of Martin being some survivor turned killer, or protégé of Doctor Heiter, he’s just a fan of the first movie. See for part two, the first film is just that- a film. And ol’ Martin here is just a deranged man who is a fan of it… well, maybe a little more since he wants to act it out. And that’s the plot. Just Martin wanting to make his own human centipede, going around his parking deck and whacking people into unconsciousness with a crowbar, then dumping them in his warehouse until he has enough. Now let’s look a little deeper at Martin’s home life…

Sexually abused by his father and resented by his mother, the only comfort Martin finds is in his pet centipede (I went the safer route with a millipede, then realized they secrete acid, so I think Martin might have made the better choice here) and a "100% medically accurate" notebook where he copies Dr. Heiter notes on how to properly perform the surgery while religiously watching “The Human Centipede (First Sequence)”.

After a meeting with his sexual deviant of a psychologist (hey look its Matisyahu!) his mother purposely gets him beaten by the upstairs neighbor. See, she hates him because her husband was sent to prison when the whole molesting his son thing came to light, so logically her reaction is to hate her son and try to get him killed since he put dear hubby in jail. After having enough of Mommy, Martin finally goes Ed Kemper on the old biddy and decides now is the time to complete his masterpiece.

What follows is one of the most jaw dropping half hours of film you’re likely to see. Remember the surgical precision and sleekness of the first movie? I’ve only seen clips and even I know the style is very sterile and persist. Yeah, well, now there’s steak knife, claw hammer, staple gun, and duct tape to replace all those useless tools like scalpels ad gauze, because those are completely unnecessary in the process of creating permanent anilingus. This movie makes a back alley abortion seem on par with MAHEC.

I’m not going to ruin all the fun about the final at, but I promise when you think it’s as bad as it can get, it somehow manages to get much worse. A few highlights would be Martin trying to signal the participants to shit by blowing raspberries at them, and there’s one trick (ala The Tingler) that would make William Castle proud. There is some truly depraved shit going on here, and despite all the hype, it damn sure delivers.

One of the things I loved about Human Centipede 2 was how muggy the film looks. It’s constantly raining, and characters always look damp and stagnant. Hair glued to their head because of the humidity, everything appearing to be crumbling away, and an overall sense of rot and decay make the mood and atmosphere set by just showing a characters’ sweat. How many movies do you know that sets the tone pretty much by perspiration alone?

It seems like ever since Hostel horror movies have been fixated on a German bad guy when it comes to torture flicks. Instead of making another prototypical 2000’s horror villain, Six instead decided to bring out Martin, possibly the most disturbing character of all time. Completely silent except for the occasional giggle, grunt, or shit-coaching-raspberry blowing, he goes from sobbingly depressed to manically sadistic. Thanks to the unusual appearance of actor Lawrence Harvey (which the costume accentuates highly), and his damn near perfect ability to play a sexually sadistic coprophagiac, this character comes across as a powerhouse of depravation.

There are some issues of course, mainly the lack of anything morally redeeming in any way shape or form. Unless you’re in the mood for some purely sickening, disturbing shit (see that, I made a pun!) you’d better steer clear, because Human Centipede 2 is nothing more than shock value on steroids, or, if you want to be a little naughty, suppositories. I’m done with the ass jokes now, that was fun while it lasted. I’m not going to give anything away, but there was a scene that truly caught me off guard. I promise though, you’ll know what it is… Be prepared to yell very loudly “Oh my F’ing God that was fucking WRONG!”

Coming from someone who couldn’t even sit through a handful of clips from Human Centipede (First Sequence), this next chapter comes highly recommended. They’re pretty much related in premises only, and all displeasure I had for the first film has turned into praise for this one. It’s brutal, it’s gory, it’s original, and it’s full of ass to mouth explosive diarrhea milkshakes. If you’re a sick fuck, you’ll love this shit. Tom Six has managed to turn a concept that I first deemed stupid into a full fledged squirmfest (let’s see how many people get that one…). 9/10

PICTURE/AUDIO– Filmed in black and white for this go-around, The Human Centipede 2 looks fantastic. Not a single blemish, and the brightness and contrast paint a perfect picture that makes this transfer pop. Also be on the lookout for that Castle-esque gimmick I mentioned earlier, really makes you appreciate the black and white… 9/10
The audio is a clear and foreboding track that sounds amazing. Everything is balanced and distortion free, plus you get to hear every bodily fluid discharge in beautiful Hi-Def glory. 9/10

BLU-RAY– The disk is arranged in a simple stackable menu that has full pop-up interactivity during viewing. Everything functions great, is easy to read, and the jump back to playback feature eliminates all busy work. 9/10

EXTRAS– There’s an interview with director Tom Six, a behind the scenes feature (which shows the ingenious way they devised to keep the people locked to their co-actors’ asses), a commentary track with Six and Harvey, a sound effects feature, a making of for the multiple posters (insect landing strip is by far the best), a deleted scene, and the teaser and trailer. Easily a 9/10